Paul Qui Returns To His Sushi Roots With Otoko

With a Japanese restaurant inside a hotel, nevertheless

Share All sharing options for: Paul Qui Returns To His Sushi Roots With Otoko

Entering Otoko feels a little mysterious, like perhaps you shouldn’t walk up those unmarked stairs—what if it leads to a guest room? But relax, because you’re going to be taken care of, with sushi, drinks, and a shared semiprivate affair with 11 other people. You’re in the hands of Paul Qui with Austin’s biggest restaurant opening of the year.

Qui, as one of Austin’s most-known chefs (James Beard award medalist, Top Chef winner) returns to his sushi roots with Otoko, found tucked away within newcomer The South Congress Hotel, barely six months old. Japanese food is Qui’s first love, from his days at Uchi and Uchiko, and with Otoko, he is "coming back to what brought me up, and what I’m most comfortable with."

Here is how things will work with Otoko's omakase event: Diners purchase reserved tickets through Tock starting on the first of every month. Come early, have a drink next door at Watertrade (soon, the public will be able to make reservations for the bar). Enter the dining room, and be prepared for Qui, longtime friend and co-worker Yoshi Okai, and their staff to create dishes just for you. Each experience will be different for each diner every time. The menu emphasizes fresh and seasonal ingredients, from the very best sustainable fish available to other kaiseki-style dishes like grilled items and crudo.

Simplicity appeals to Qui: Patrons sit, share their preferences, and the chefs just run with it. It sets a scene in which the chefs and guests engage in a culinary trust fall. Qui compares the format to freeflow: "We’re going to start very traditional at first, and then riff off that." Each and every dish will receive particular attention. The kitchen is like "the stage that we built," he explains, with immediate satisfaction. "You make it, you can eat it instantaneously." 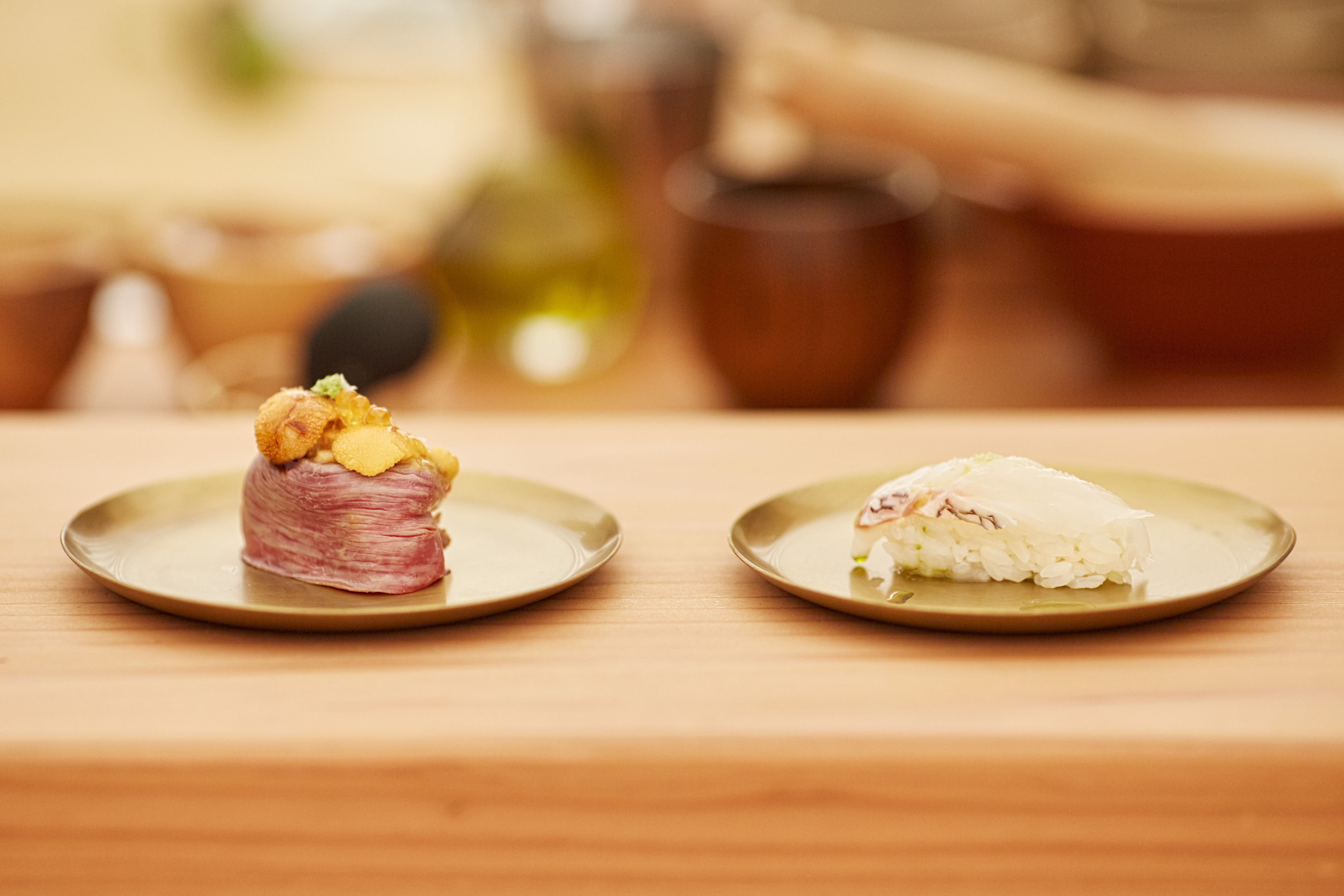 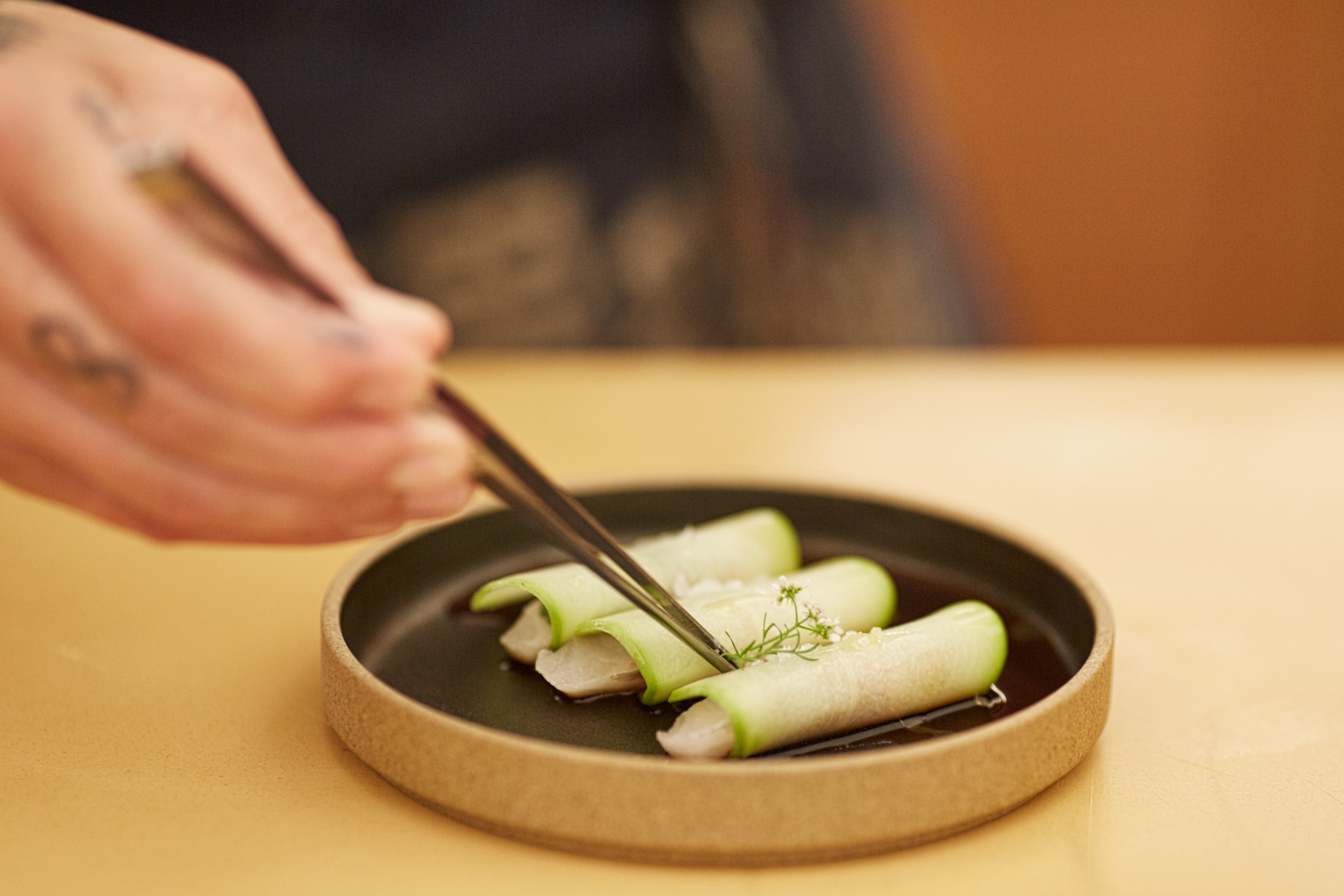 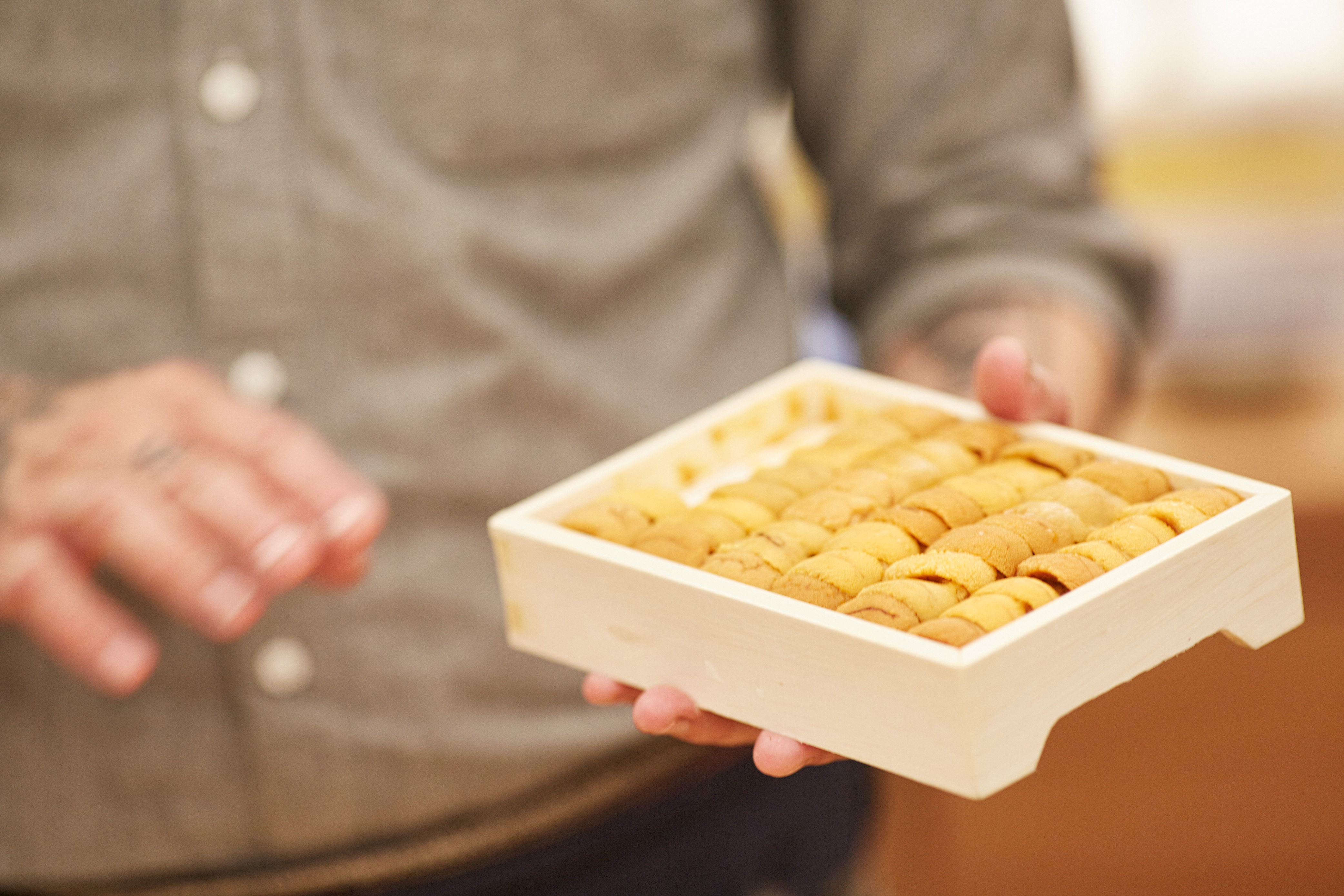 Okai reflects that kinetic method completely as he breaks in the relatively new kitchen (most of the equipment and furniture arrived this past weekend), gearing up for the restaurant’s first mock service that evening, just a day before its official debut today. He deftly cuts fish and constructs perfect pieces of sushi while talking lovingly about the ingredients he uses, like what he deems the best uni ever, as he tops a seared piece of Wagyu beef. He actually trained Qui, too, back in their Uchi days. 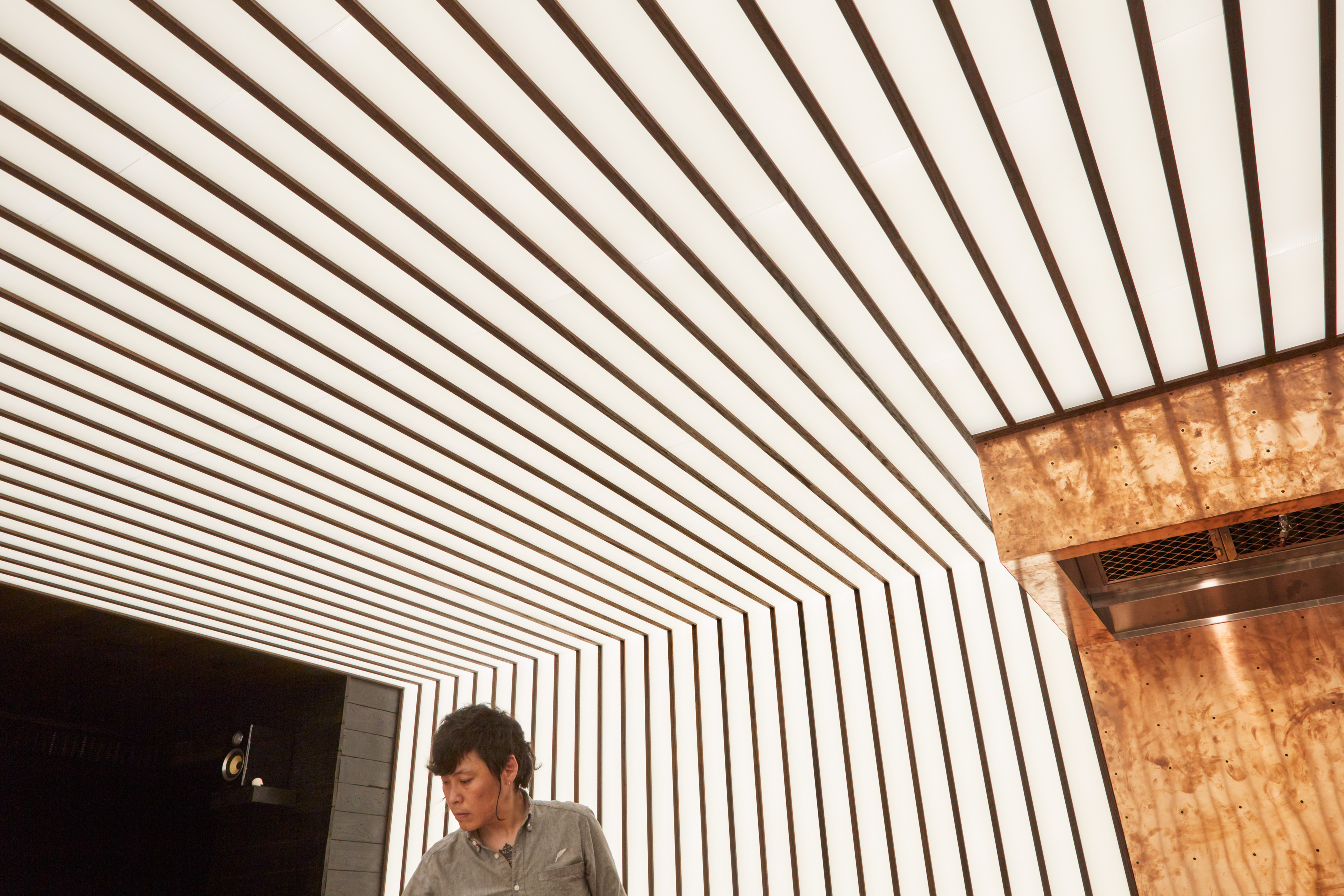 The dining room’s stunning centerpiece is the dominant wraparound glass fixture, reminiscent of Japanese screen doors, which creates muted ambient light. Maija Kreishman, partner at Michael Hsu, the architecture firm behind the restaurant and the hotel, refers to it as the "light box," where glass is lit from behind, "meant to provide a stillness to the space," adding "a little bit of drama to the food."

"We really wanted it to be a ‘found’ experience," she explains. This begins with that unmarked staircase within the hotel’s courtyard, which leads to the door with a barely-there perforated logo. Inside the minimal room designed alongside Studio MAI are simple materials: burned wood walls, red wood countertops, blue plaster walls, copper accents. Everything is meant to "emphasis the craft of the food," she says.

"Fine dining doesn’t have to be so rigid," says general Manager Alex Dubey, who previously worked at Apis. It should be fun for both chefs and diners. Details and service will change in minuscule ways throughout Otoko’s lifespan, molding to the way visitors interact, from the way they talk to seatmates to how they use their chopsticks. "It’s the culture of care," he explains. 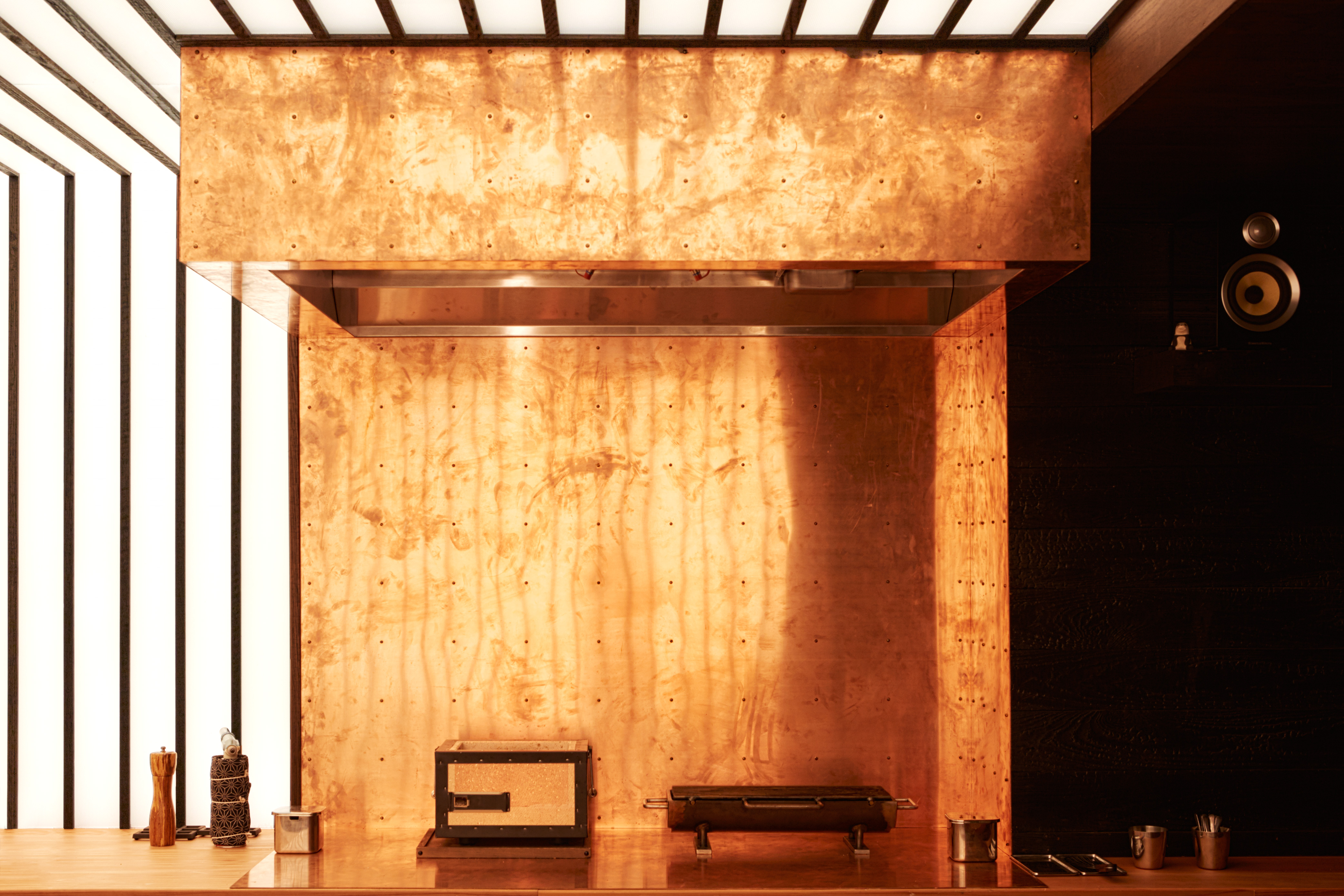 Then there is neighboring cocktail bar Watertrade, which serves as a counterpoint to Otoko’s "stillness," according to Kreishman. "There’s a stir to that room," with a mirror-like polished stainless steel and wood ceiling and leather furniture. There is an atmosphere of "elegance" with amber warm lighting recalling "cocktail bars from decades past."

The entire project, from Otoko to the South Congress Hotel, was originally helmed in partnership with Jesse Herman of New Waterloo (he has since left the group, but the company remains involved). Everything was announced almost a year ago, spotlighting Otoko's aim to create Japanese cuisine with a traditional spin. There will be one barback and server, one manager, and up to five chefs behind the counter, including Qui, Okai, and Sam Walter, who previously worked as the sous chef under Larry McGuire's iteration of Jeffrey's.

Every dining style is important to Paul Qui, from lengthy dinners, standard meals, to what he describes as "the disposable plateware" ones, because it is all "important for Austin’s food culture," he says. "All those points need to be hit," which can even be seen through his other restaurants, like the different facets of his flagship restaurant with patio dining to the ticketed tasting menu, and the East Side King trailers and the recently-opened and very spicy Thai Kun brick and mortar. 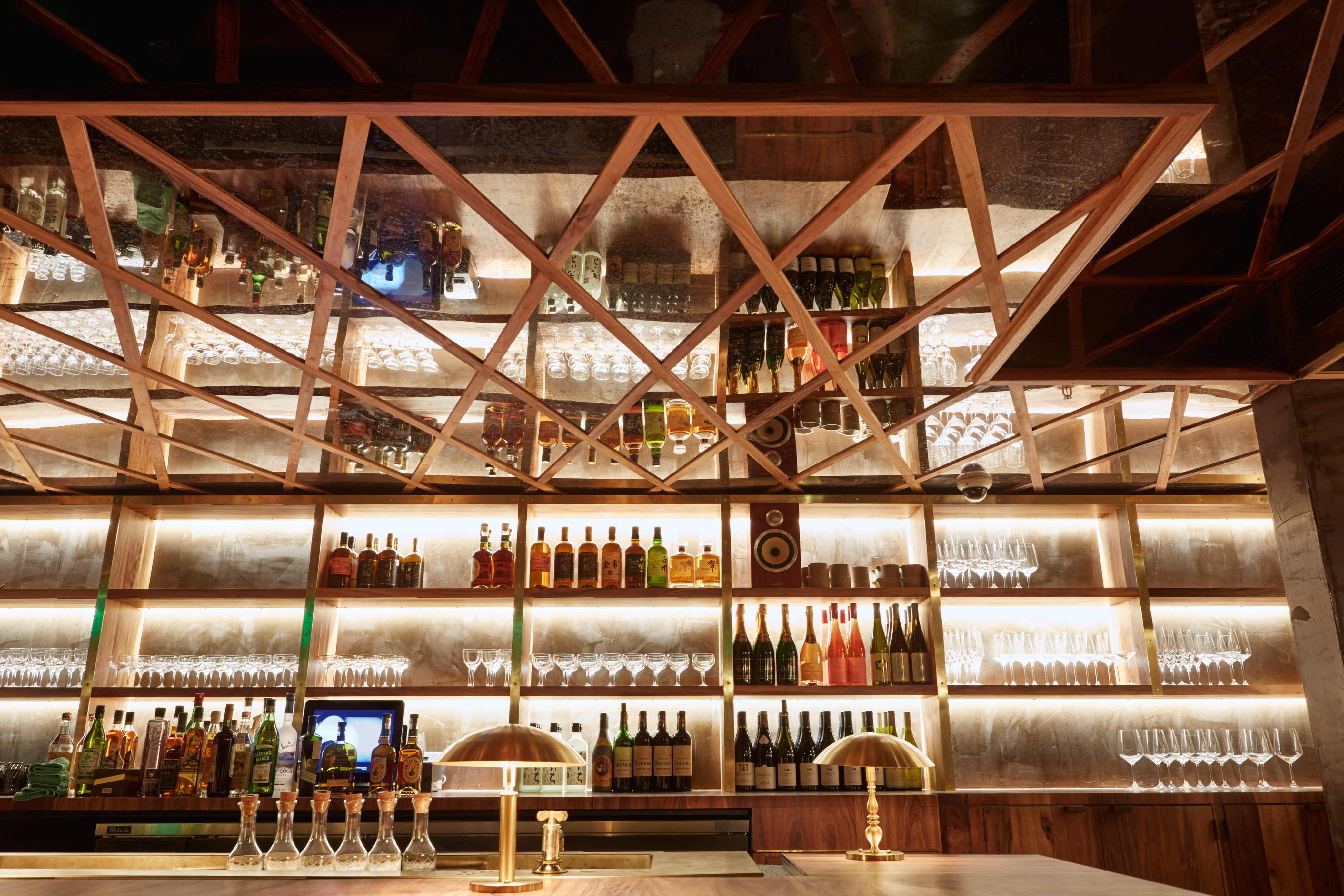 In the scope of Austin’s ever-changing dining landscape, Paul brings up chef de cuisine of Qui (the restaurant) Jorge Hernandez’s op-ed on elevating and investing in Austin's dining community. He cites the economic challenges of opening and running successful restaurants while being true to the food.

But Qui isn’t worried. He doesn’t necessarily see the restaurant as an agent of fine dining (aside from the price point). "It’s going to be a lot more rock 'n' roll, a lot more Austin," he says when describing the restaurant’s casual approach. "People get sushi for some reason," he explains, which makes it easy for Otoko to enter the market. "In order to introduce ideas like this into the city, it has to be very organic in its approach." This is his way of injecting inspiration into Austin's food bloodline.

Otoko reservations for March and April are already all sold out.