And the tequila cantina.

Share All sharing options for: Chef Jack Gilmore’s Lake House Has the Outdoor Kitchen Of Your Dreams

Longtime Austin chef Jack Gilmore, of Texas comfort food haven Jack Allen’s Kitchen, decided to live out in Marble Falls because he and his wife, LuAnn, wanted something different. “We never thought we’d live this far out,” Jack says, “but there was such a peaceful drive out here, might as well let it happen.” That is how Tequila, Texas, the Gilmores’ home along Lake Travis came to be.

"We wanted to create a party house," he explains, where his friends, family, and dogs could all just come over. Twelve years ago, after his sons Bryce and Dylan (of Odd Duck and Barley Swine) graduated high school, they found the Marble Falls location and worked to remake the property into their own. Jack put his sons to work, and the trio built everything themselves. "It was a work of love," he says, and the family worked over weekends using reclaimed wood and other materials. 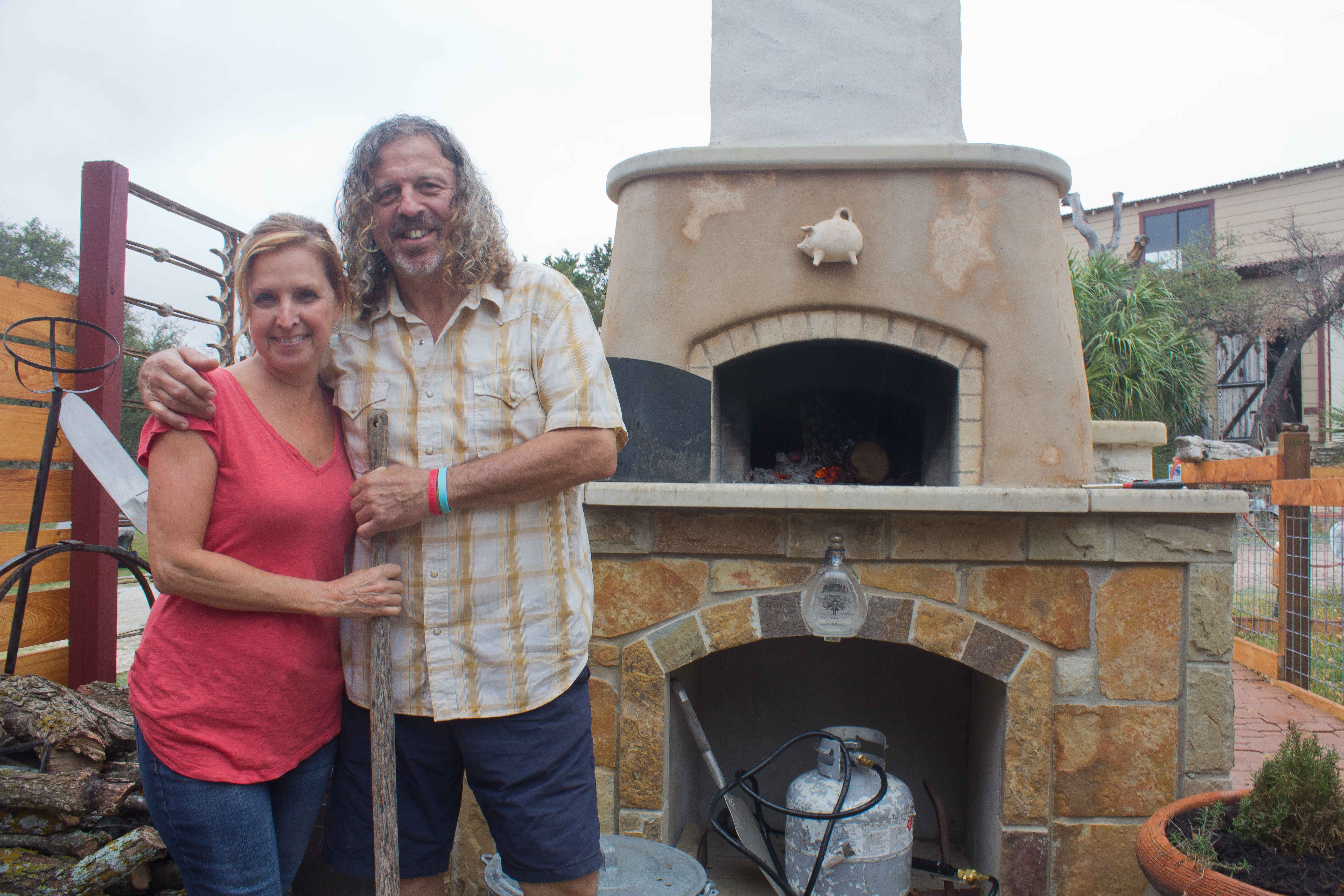 The house is made up of layers, from the many outdoor spaces, walkways, decks, and of course, kitchens. Gilmore thought of it like a restaurant: "I really like the layer approach," he says, where people can find different nooks and crannies to hang out, depending on their moods. Eater got to explore the multifacted home, from the renovated interior kitchen to the many outdoor cooking niches.

The original kitchen was completely redone and opened up, so that anyone cooking could look at the lake. Jack’s hodgepodge design philosophy is the anything goes variety. "I want someone to look around [and think], ‘Man, I never thought of that.’" This includes drilling holes into the wall to store upside-down wine bottles. "People say I’m a hoarder," he says, "but I’m more of a collector." The walls are lined with grouped vintage finds like cheese graters and lanterns.

The main color in the kitchen is appropriately called Tequila Sunrise, a saturated orange. The sons are represented in hue-form within the house, too: there is Bryce Canyon (red) in the family room, and Dilly Green in a bedroom.

The first outdoor space is the outside kitchen with all the necessities: stove, grill (perfect for quesadillas, steak, and vegetables), refrigeration, television screen, and beer cooler. This is where the Gilmores tend to spend most of their cooking time.

One level down is the cowboy-style grill, meant for slow cooking food and rotisserie meats like pig or goat. The first grill the Gilmores built didn’t work out too well, so Dave Eberhart of Texas Ovens helped create the current iteration, made with white rock. The wheel hovering over the frame makes it easier to spin the meats or vegetables, ensuring that everything is cooked evenly.

Jack sees his bucket list appliance, the oven, as a community one—if the fire’s burning, neighbors can come by and throw in food, like biscuits. The family will make anything from pizza, chicken, carnitas, fish, and bread. On this particular Sunday evening, fish and scallops will be on the dinner menu.

Eberhart and Gilmore were drinking tequila one night, when the oven maker realized exactly how to design the one-of-a-kind oven. To honor the occasion, Gilmore made sure that very bottle was placed right within the stone oven.

Gilmore started collecting tequila during his time as a corporate chef at Z’Tejas. At first, he collected bottles that looked pretty, but now, he "knows what I’m looking for." The Cantina is his special space for his 300+ tequila collection. "The shrine is just to honor what took so much work," he says.

It is not a precious collection: everything in the room is meant to be enjoyed. "Any bottle that’s down there," right down to the 25-year-old ones, "we’ll crack open in a heartbeat and taste it," he explains.

The couple is now working on building a chicken coop next door to the barn, where Bryce’s defunct yet iconic orange Odd Duck trailer sits unused.

Where to Eat at Austin-Bergstrom International Airport (ABIA)