How Austin Became the Home of the Crucial Breakfast Taco

The history of the city’s beloved morning dish.

Share All sharing options for: How Austin Became the Home of the Crucial Breakfast Taco

There are few things you are required to eat in order to claim you’ve actually experienced Austin food culture. There’s the world-renowned barbecue scene, which tempts food connoisseurs across the globe to take a detour through, as well as the largely underrated kolaches that represent the Czech immigrant population. Quite possibly the most necessary dish to check off on the culinary passport for your trip in the Lone Star capital, however, is the breakfast taco.

"‘Breakfast tacos’ has that classic Tex Mex formula," said Texas food writer Robb Walsh. "In that one word is English and one word is Spanish."

Austin is the birthplace of the phrase breakfast taco.

Like most foods in the Tex Mex pantheon, the breakfast taco was born out of cross-pollinating Mexican culture with Anglo-Germanic ingredients that were available in Texas. The recipe is simple: take a tortilla, and stuff with desired breakfast ingredients—eggs, processed yellow cheese, pork, etc. For Austinites of all backgrounds, this iconic breakfast has become a cheap, go-to necessity.

"It’s pretty much a cross-section of America," Roberto Espinosa of Austin’s Tacodeli said about his usual clientele. "The college kids love them for the same reasons I did growing up. It’s a pretty democratic taco—come one come all kind of thing."

Taco makers and food experts alike concur that the breakfast taco’s origins lie in the kitchens of immigrant Mexican families living in Texas. Like rice and bread in Eastern and Western cultures respectively, the tortilla proved to be the foundation for much of Mexican cuisine, an ever-present edible utensil for those at the table to use when digging into their grub. 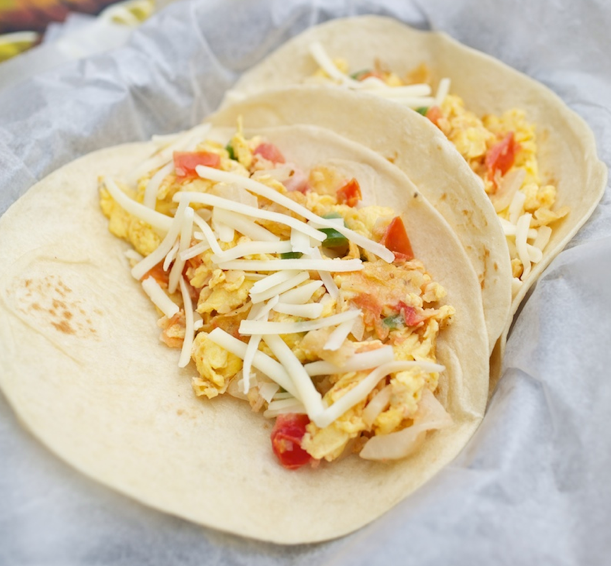 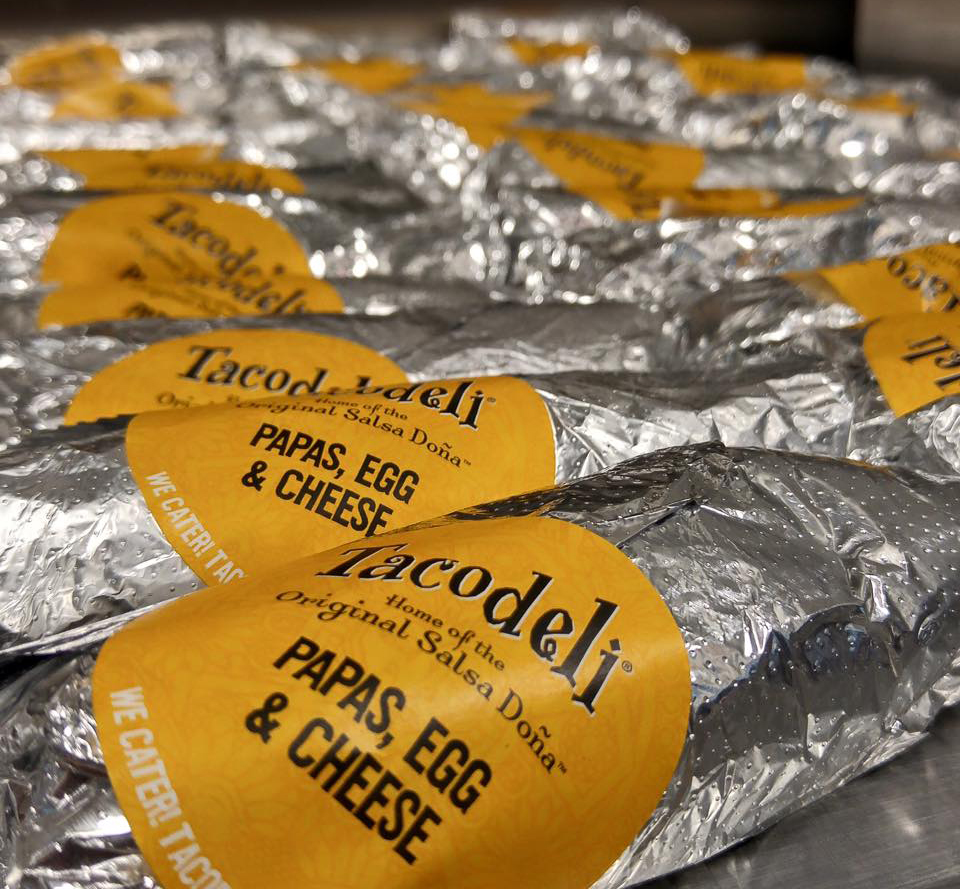 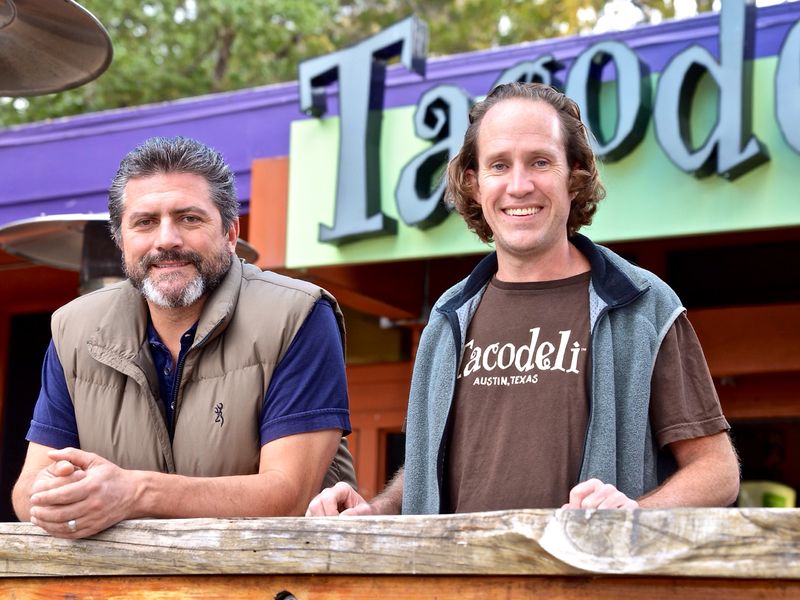 "Tortillas were used for everything—it was a staple," said Diana Vasquez-Valera, one of the founding members of Austin’s family-run institution Tamale House, about the meals she ate growing up in home. "It was just a natural flow for our mother to try to make it creative and try to make it delicious."

While its conceptual origin has been definitively established, the the breakfast taco’s transition from family kitchen to the commercial arena isn’t so clear cut. Robert Walsh claims that records point to Corpus Christi during in the 1950s as the first instance of the iconic breakfast’s existence, known then as the "breakfast taquito." But Austin, according to Walsh, is the birthplace of the phrase breakfast taco, and thus the original catalyst for its widespread, and originally unexpected popularity.

"Breakfast tacos began when they were sold to the public, and they became—not an overnight sensation, but a novelty, a delicioso concept," said Vasquez-Valera.

The elder stateswoman of Austin’s breakfast taco scene said that her family initially didn’t think there was much hope for commercial success with the breakfast tacos that were served in their own home. This was largely because the idea of the largely Anglo population in Austin having an appetite for this Mexican-inspired dish wasn’t a strong likelihood in the ’80s. However, her father Anthony Vasquez took a trip to California, which ignited the drive to establish the first Tamale House. She explained that Mexican restaurants were typically sit-down, but on the West Coast, her father saw dinky to-go stands with vendors hawking tacos to passersby.

It's our version of soul food: good for the soul

Adopting this fast food philosophy to the Tex Mex flavors, the Vasquez family set up Tamale House, with the first of several family-run branches being on First Street and Congress Avenue, where customers could order tamales and tacos for breakfast at extremely low prices. (Currently, however, only the Tamale House East location on East 6th Street, nowadays run by Valera-Vasquez’s nieces and nephews, remains after Tamale House owner and family patriarch Robert Vasquez passed away in 2014, which lead to the restaurant’s shutter.)

Since Tamale House’s inception, the popularity of the breakfast taco and taquerias has enjoyed a meteoric rise throughout Austin. Dozens of taquerias populate the city, catering to both locals and visitors. Transplants to non-Texan cities and some of those in the latter category even brought the dish outside of Texas. Nowadays, you can find this staple in almost any food-minded major metropolitan city.

"[The breakfast taco] was etched in the public's imagination by South by Southwest, by journalists from all over the country, coming to Austin, going to Tamale House #3 or one of those places, getting flour tortilla with scrambled eggs and bacon and salsa and maybe beans, maybe not, probably cheese, and discovering this is incredible," said Walsh. "So the word went out, and in Brooklyn and L.A., you can get Austin-style breakfast tacos."

With Austin’s popularity as a hip home for the millennial generation, the local food culture has evolved to accommodate the culture. Breakfast tacos have been no exception to this development. Armando Rayo, co-author of Austin Breakfast Tacos and forthcoming The Tacos of Texas, explained that while the classic flour tortilla, egg, bacon, and cheese maintains its status as the Austin class, imaginations can run wild with all the possible Frankensteinian combinations that are classified as breakfast tacos: corn tortillas instead of flour (part in the conquest for authenticity, part for those looking for a gluten-free option); untraditional, vegan-friendly fillings such as tofu and roasted vegetables for those on the meat-free diet; even your classic food-coma-inducing breakfast of steak and eggs has a tortilla-wrapped version of itself.

"The breakfast taco, it's the thing you can have whenever you wake up," said Rayo. "7 a.m., 2 p.m.—it's basically one of the things that gets you started in the morning. In our area, it's our version of soul food: good for the soul."