It’s Always Sunny (Side Up) at The Omelettry

In a city that changes by the minute, The Omelettry is one of the few constants.

Share All sharing options for: It’s Always Sunny (Side Up) at The Omelettry

It’s not even been a year since The Omelettry was forced to move from its original location on Burnet Road to its new space on Airport Boulevard, but the only thing that has changed apart from the address is that you can now pay for your omelettes and pancakes with your credit card.

Long an institution among central Austin’s breakfast aficionados, along with hungover college students and underemployed Austin slacker types, The Omelettry opened its doors on January 20, 1978. Its location at the corner of Burnet and 49th was practically an accident in that owner Kenny Carpenter just happened to drive by one day and saw a For Rent sign.

"My demographic study was driving around Austin, seeing a for rent sign, and pulling over and looking in windows," he laughs. "It was by fluke that I picked a really good location."

Kenny, whose then-girlfriend Joni was UT-bound, moved to Austin with the singular goal of opening a restaurant. He’d gotten the idea during a brief stint in California, where he’d seen an extremely successful omelette-based diner. His gamble paid off: The Omelettry was a near-instant success and within a year, he opened The Omelettry West on Lake Austin Boulevard. Kenney later sold his share in that location to his business partner Kent Cole, who had been running Omelettry West with his then-wife Patricia Atkinson, later renamed the restaurant Magnolia Cafe. Atkinson left to start Kerbey Lane Cafe.

Starting a restaurant from scratch in what was then a small, sleepy city—the only industries in Austin in the 1970s were the university and state government and the population was a scant 331,000 people—gave the Carpenters a crash course in Austin culture.

"One thing we didn’t really know before we moved here is that there were all these folks who didn’t seem to work, or work regular hours, who would come in and have breakfast at all hours and then hang out," says Joni. "They’d come back for lunch. It was something we didn’t know existed until we opened the restaurant, that there were people who would come here and just hang out with their friends."

"This isn’t just a restaurant, it’s a community center," says Jesse. "People hold meetings here, there was a wedding at the old location." 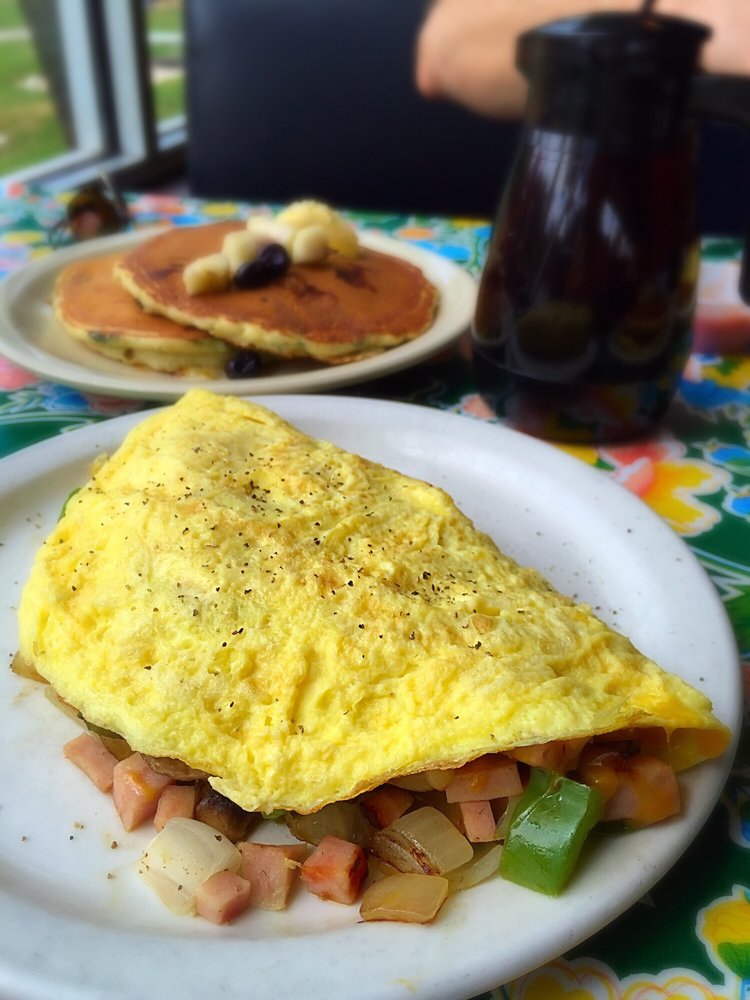 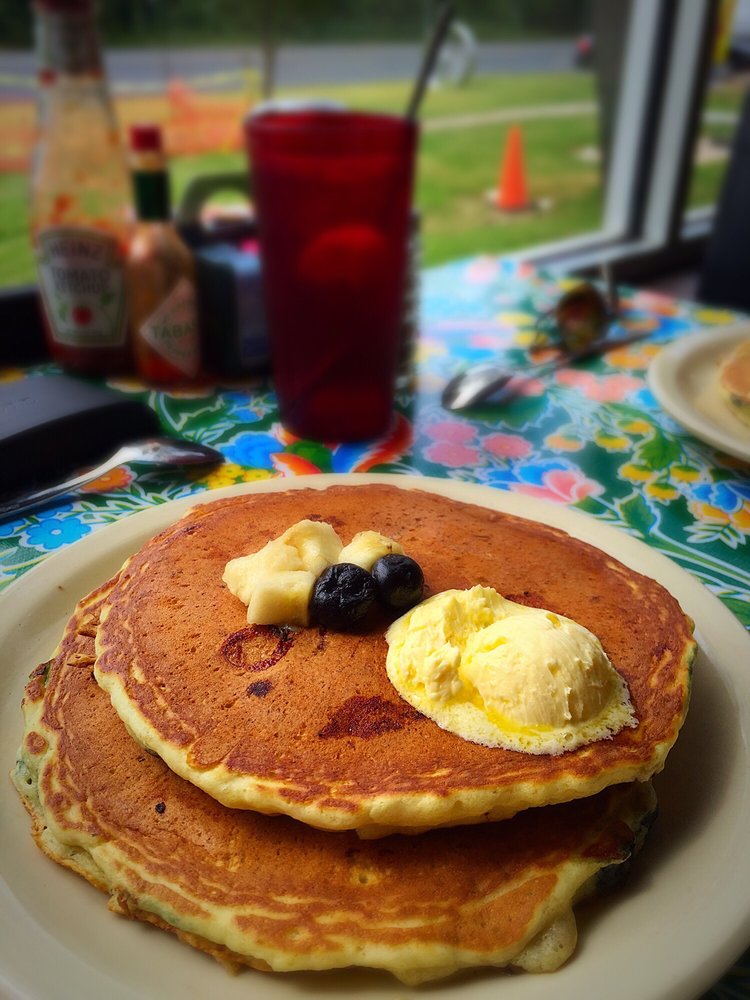 For Jesse, who is 33 and manages the day-to-day operations of the restaurant, The Omelettry is practically an older sibling. There is a photograph of him hanging in the foyer of the restauran, where he’s hanging out in a playpen next to his dad in the office of the old Burnet location.

"One of my first memories—I must have been 3 or 4—is of standing by the soup machines and asking my mom for some vegetarian chili," he laughs. "My parents tried to push me into college, but I was rolling silverware at age 12."

"I figured this is grinding work. I’ll scare it out of him," says Kenny, who put his oldest child to work busing tables and mopping floors.

Joni, who works as an academic advisor at UT, says, "Of course, I tried hard to get him to go to school, but that only lasted a few years."

"Up until I had to pick a major and I realized that I wanted to go back to work at The Omelettry," Jesse says. He was promoted to front-of-house manager at age 21, which he recalls was a bit of a challenge because he was often in charge of people who were older than him. 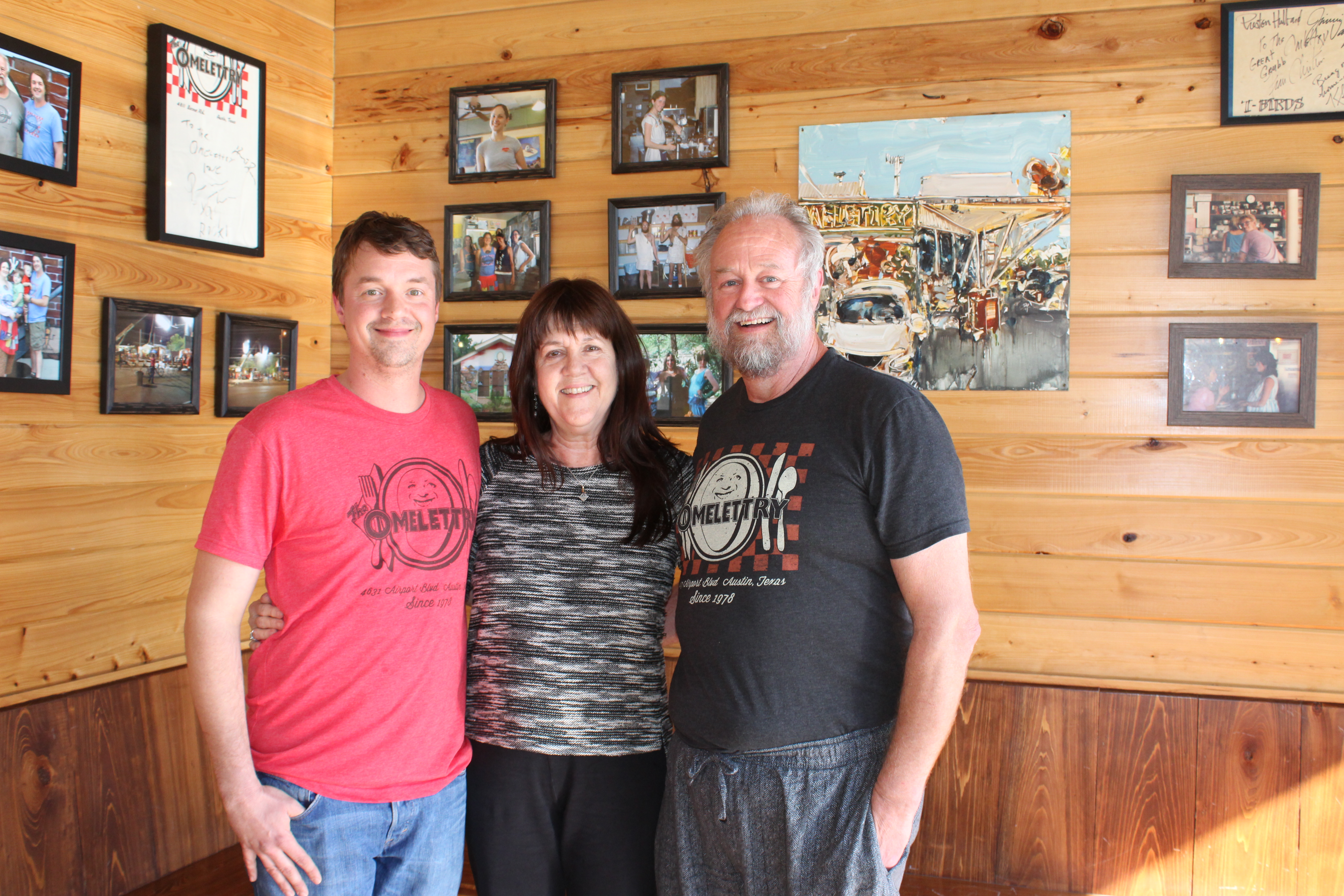 This isn’t just a restaurant, it’s a community center.

It would make sense if the Carpenters felt some regret or wistfulness about having lost the original location of the restaurant that has come to define breakfast in Austin, but quite the contrary. Jesse, who told Eater back in 2014 that the old restaurant was quite literally falling apart, reports that business is booming on Airport Boulevard. (The building was demolished almost immediately after the Carpenters vacated it.)

"My dad was worried that no one would show up when we opened for business here [over Memorial Day weekend last year]," he recalls. "I wasn’t worried at all." All it took was one email to a list of faithful regulars, and there was a line out the door that day.

What’s more: the Carpenters reckon that this new location, which is less funky than the old one but still feels like Austin with its offbeat art and decor, has expanded their customer base. Kenny ticks off the neighborhoods that all feed off the Airport artery: Hyde Park, Cherrywood, Mueller, plus traffic from I-35. "We’ve even got folks who come all the way from Pflugerville just to eat here!" he laughs.

"Our clientele is extremely diverse," says Jesse. "All walks of life come through the door."

"Probably even more so since we opened here," Kenny agrees, also noting that he sees many more families with children coming in for breakfast. "At the old place, we had two high chairs. Now we have six and we regularly run out of them during breakfast on the weekends."

All those babies in high chairs are primed to be the next generation of folks to grow up eating Popeye omelets and fluffy pancakes studded with fat blueberries or chocolate chips. And they can rest assured that the menu they will eventually be able to read will stay the same even as they grow and change, something that Kenny considers part of The Omelettry brand.

"It has been hard to get Kenny to make changes to the restaurant because he was always of the mind that people expect to see that same stuff," says Joni. "People graduate and move away, and when they come back, they’re so happy to see that we’re serving the same things we’ve always had."

After 38 years of very few changes, they must be doing something right.