The Rainey Street restaurant brings grains and more to the forefront

Share All sharing options for: How Emmer & Rye Thrives on Austin’s Seasonal Challenges

Emmer & Rye is steadfast in what it is concerned about: using and highlighting Austin ingredients, produce, and meats. The team of chefs — owner/executive chef Kevin Fink, chef de cuisine Page Pressley, and pastry chef Tavel Bristol Joseph, as well as the rest of the engaged squad — constantly seek to expand on what they can do to make sure every dish fulfills its edible destiny, whether it’s the namesake wheat, every usable part of a lamb, or fermented rice.

Since Emmer opened a year ago, that obsession paid off with its thoughtful fare, which even earned it an Eater Award. Eater sat down with Fink, Pressley, and Bristol-Joseph to chat about about the restaurant’s mission, working closely with local farmers and ranchers, their definition of 'sets,' and that time a bird made the restaurant its home.

How would you describe the evolution of Emmer & Rye within the past year?
Page Pressley: "We have such a better understanding of how we all work best, both together and apart. That really allowed us to step into different lanes and really do a better job of figuring out these cycles of creativity that we all go through. If one person is peaking creatively and one person is focusing on more operational stuff, there is no need to force it all the time."

What have been some of the challenges of opening?
Tavel Bristol-Joseph: "Being able to adapt to the seasonality of Austin and Texas, and planning dishes in advance to make sure that we have them on our menu for a period of time. We had chilis and butternut squash when we opened the door. Half of those ideas lasted the first week, and we had to figure out the next step after that."

Kevin Fink: "Do those limitations create these really beautiful ideas? You have to look a little deeper for them, and sometimes be more vested in throwing out the first idea, and going with the second, third, or fourth one, because that one’s actually a lot better. You can’t be afraid to fail."

Pressley: "One of the backbones of this restaurant has always been figuring out how to make something special out of what could be waste. We've gotten better at it with more organization and more time in our day."

How would you describe the core of Emmer and Rye?
Fink: "The food here is best when the three of us are at this great place of bonding and excitement, that is where you can almost taste it throughout the menu. While we all do a good job of melding our food together, when it really sings is when you can have these completely different experiences all in one meal." 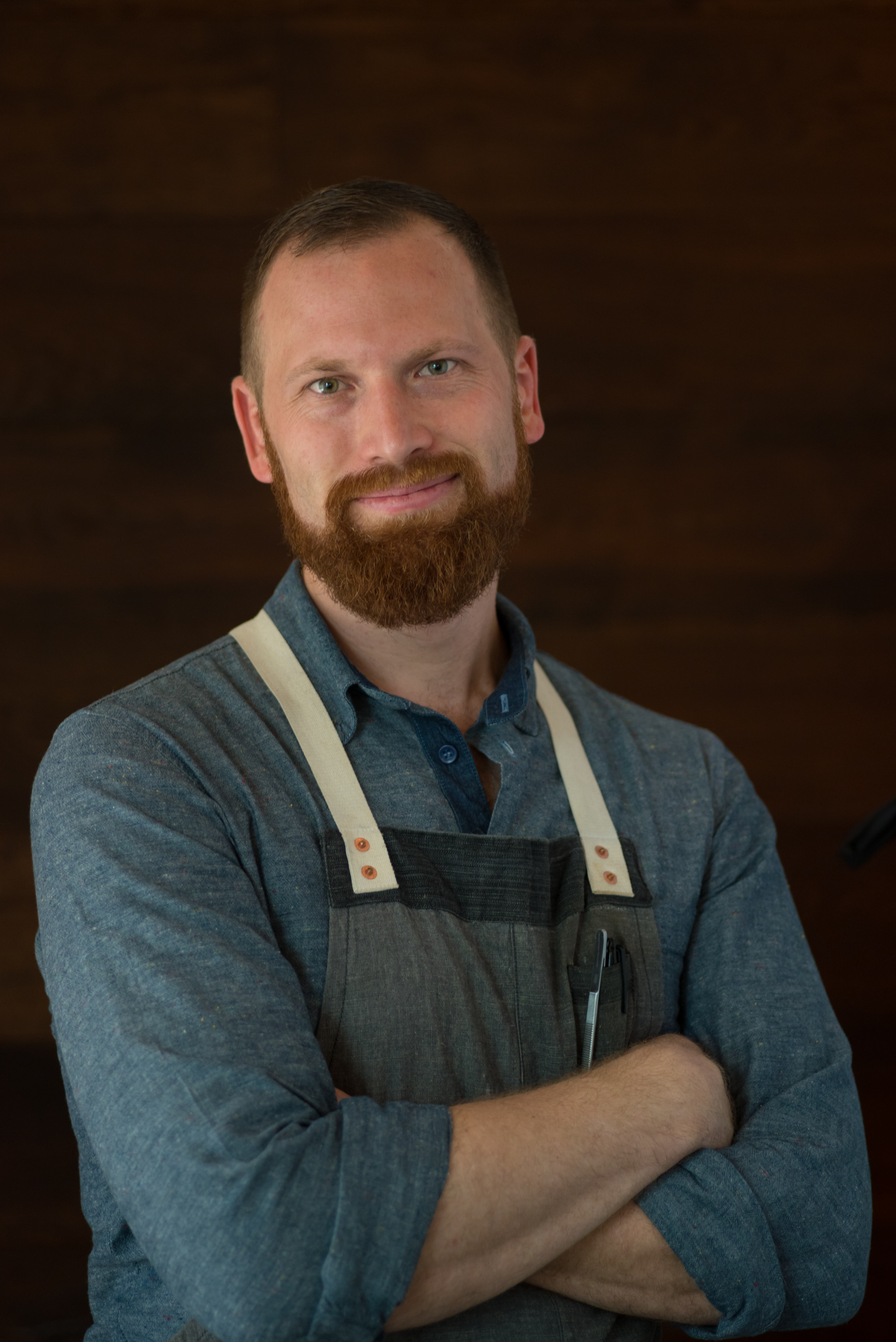 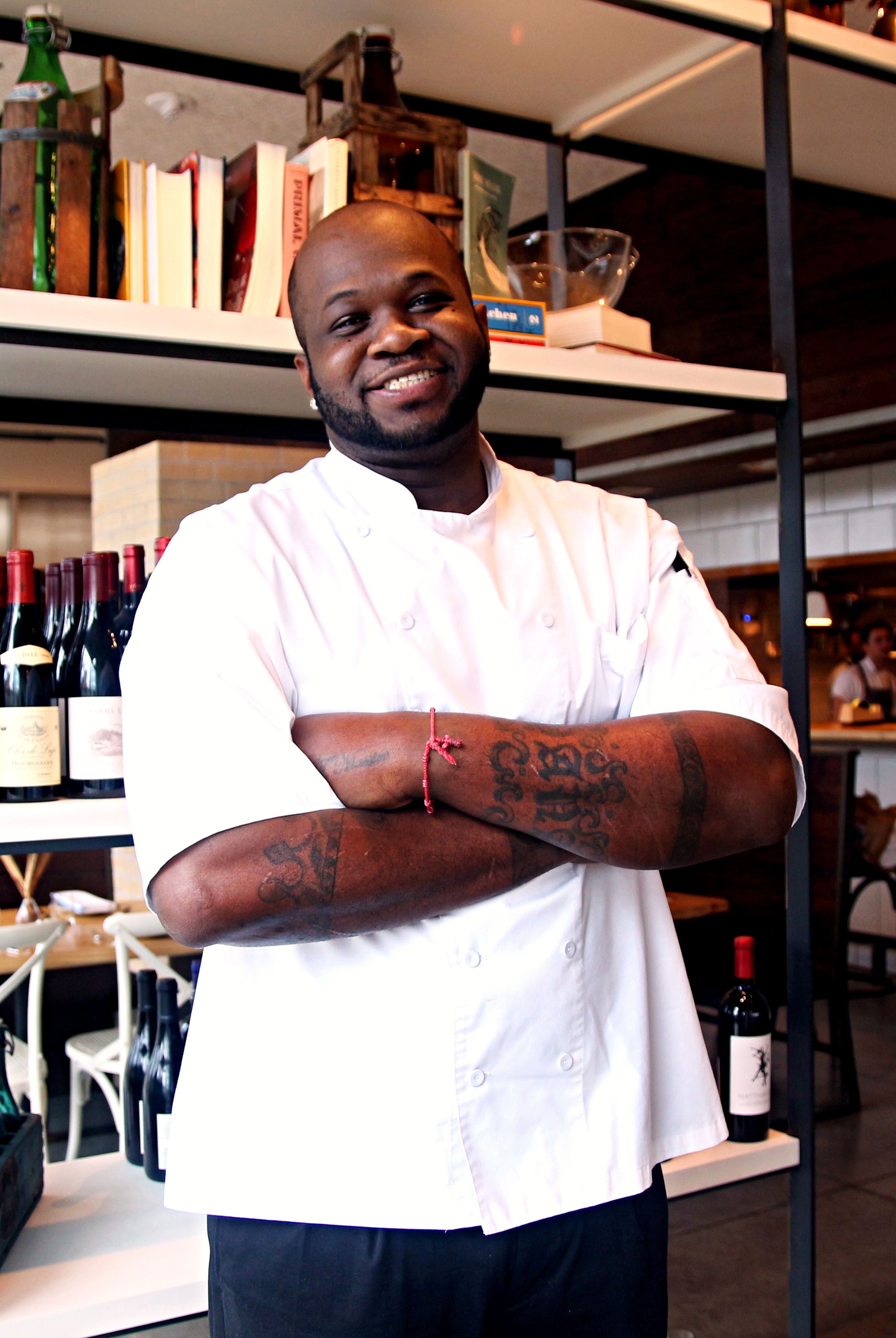 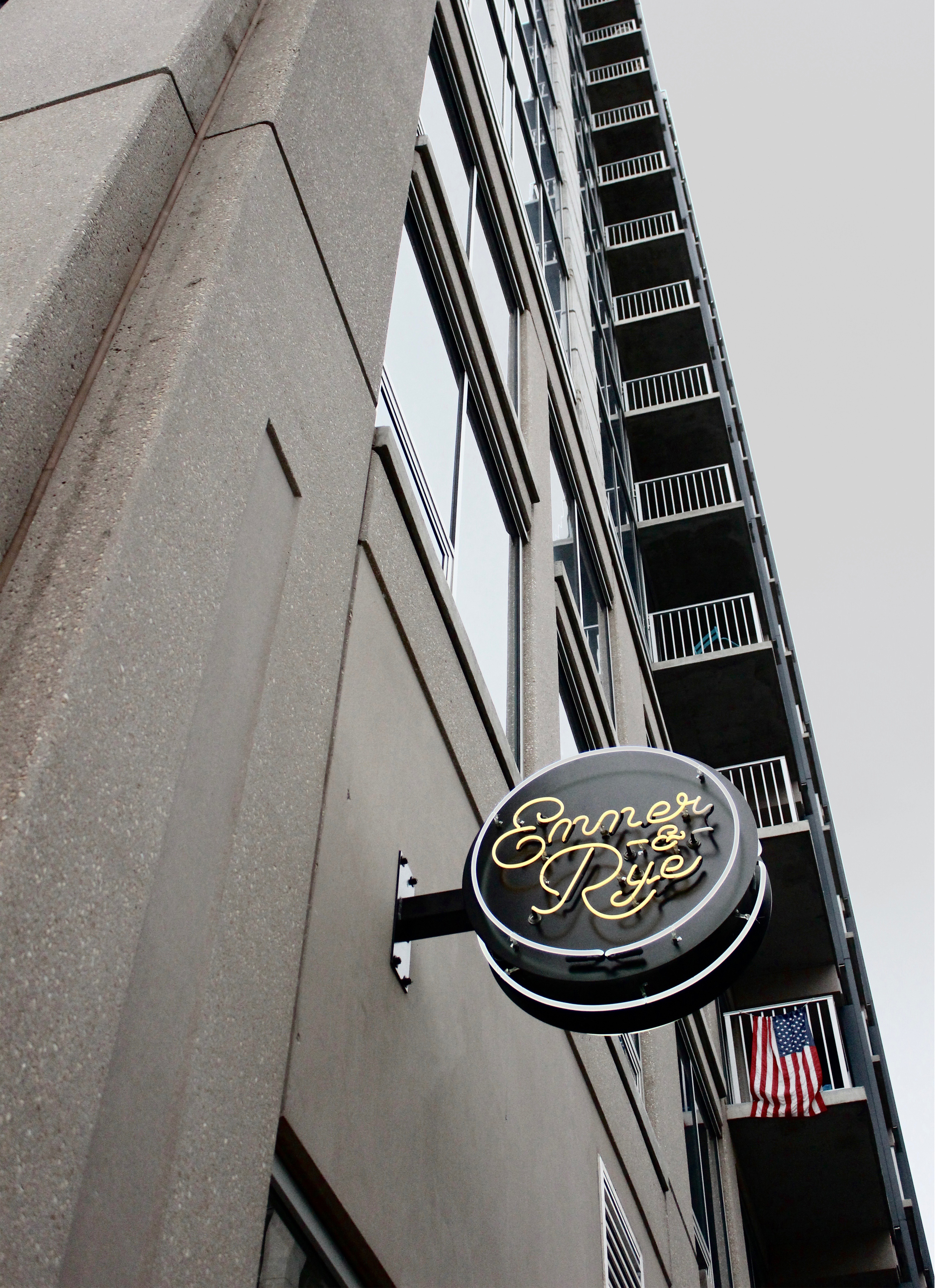 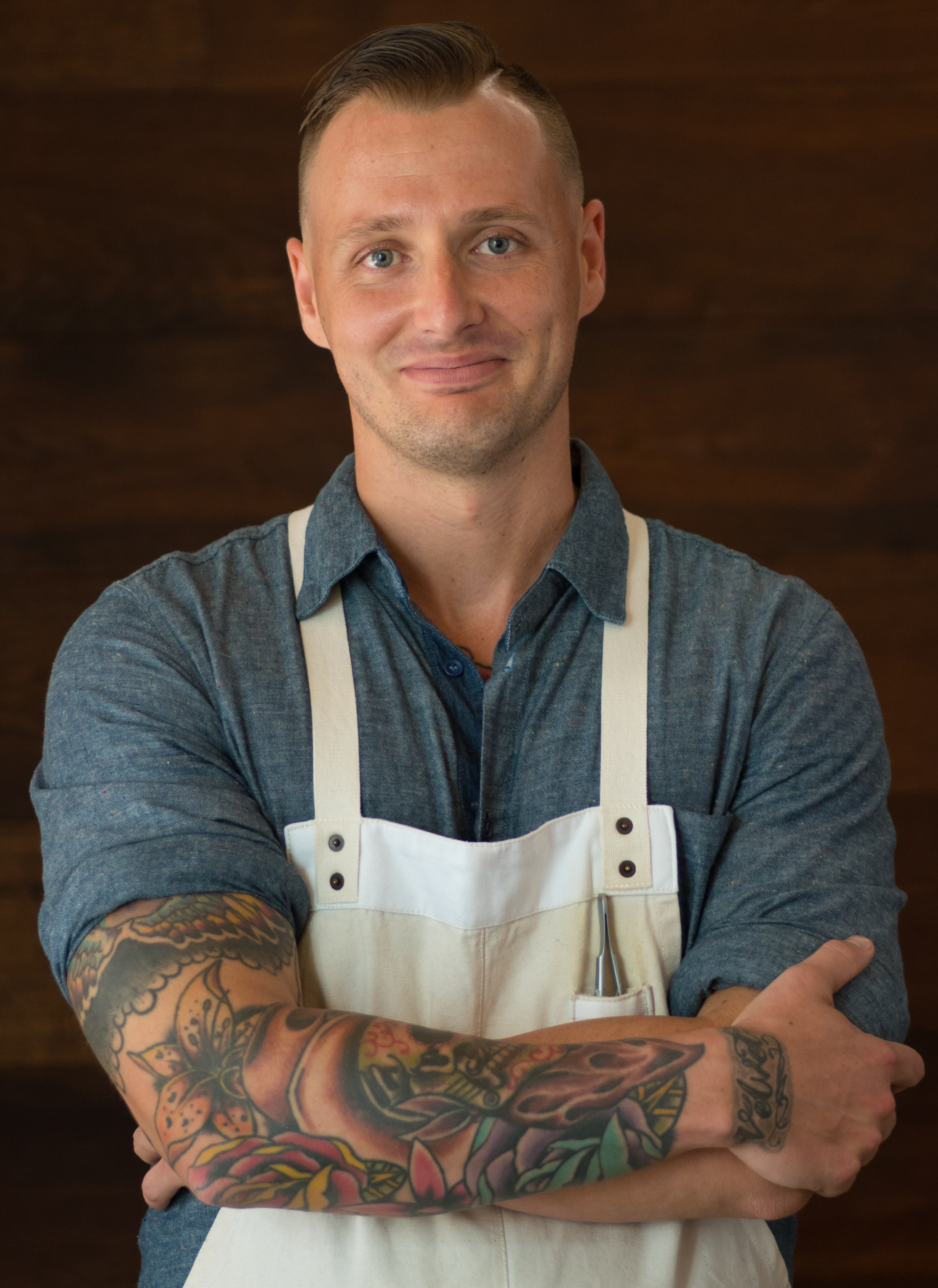 How does you form relationships with local farms and ranches?
Pressley: "Our people are so great about just bringing us stuff they think we might like. That brings inspiration, seeing someone else excited about something they think you’ll like. You have to be receptive and understand that it is part of what is great about this. When it is stressful, laugh because there are way worse problems to have."

What are some funny stories from Emmer's first year?
Bristol-Joseph: "Before we opened up, a bird got [into the restaurant.] We were in here with ladders, brooms, megaphones, basically everything, trying to get it out because it was just before our inspections. Page comes in and we tell him about the bird. He starts yelling, ‘Hey, bird!’ We asked him what he was doing and he just kept yelling, ‘Hey, bird! Hey, bird!’ It didn’t work. We ended up having to get it out with a cricket by the door."

Fink: "We have our own vernacular now, which is the term ‘sets.’ We would discuss dishes forever and ever, and I would refer to a series of ingredients as ‘sets’ with such ritualistic commonality that [the staff] started making fun of me. Eventually, sets took on a whole different thing. Sets is something good. ‘How you feeling?’ ‘You know, sets.’ It literally means nothing, but depending on the tone, it also means everything."

What has been the reception to Emmer’s roaming dim sum carts?
Fink: "95 percent of people are so excited about it. Dim sum was the easiest term for people to latch on to. Once you’re here, you’re just being shown these great dishes. Culturally, by no means is it normal dim sum."

Pressley: "That is the only battle we fought. It is a super integral part of our service, but I don’t think it describes our food necessarily."

Fink: "The thing that changed the most in our menu was our understanding of what worked on dim sum and what did not. We opened with a series of dishes that either got colder quicker or weren’t visually engaging to people."

What works particularly well in dim sum?
Pressley: "The biggest surprise has been roasted vegetables with some sort of fat element. If you wrote that kind of dish down and put it in front of someone, it would probably disappear on the paper. If you actually put it in front of them, it has this aroma that it is very craveable, which changes the dynamic."

"You have to be more vested in throwing out the first idea, and going with the second, third, or fourth one, because that one’s actually a lot better."

What do you think about the current state of Austin dining and its future?
Fink: "There was a rush to the market because everybody saw so much growth occurring. Austin is still very much a market where you have to be very purposeful and really nail it to succeed. The good thing is that, in all opportunities, something will grow. In the starkest desert, there is life, and we are very far from that. Austin, as a food community, is growing a lot. It has a incredibly bright future and the potential to be recognized nationally and internationally because Austin has that feel to it already."

Bristol-Joseph: "What I would like to see is more diverse foods. I think that change is going to come, because more and more people look around and say, ‘Hey, this isn’t here, and we need to make it happen.’"

"I would like to see focus on the schools, the internships, and externships, to give students coming out of those schools a little more substance so they can come into the workplace and be more effective. There is definitely a shortage of really good cooks, way too many restaurants opening up, and not enough people to fill those positions. Education will develop the food scene. There are so many positives that can come out of it. These kids want it, but they are not being guided in the right way or given enough. They deserve more."

Fink: "If we, as a community and a culture, want to value what we put into our bodies and the people who make a craft of, not only preparing artfully-done things, but also sustainable sourced and nutritionally proper, we need to invest in that as well."

Where do you see Emmer & Rye a year from now?
Pressley: "We’re really starting to develop unique flavors to this area and region, whether it be bread aminos or understanding more about the particular cuts of lamb and how to make a dish that has six portions of that. It is a fining and finessing. I think the next thing for us will be: how to create a larger influence amongst ourselves, and hopefully, that is something our community is excited about and buys into."

Fink: "We're excited to be part of what is going on now, but we're also hoping to help responsibly steer the future of the food community. We have such a special community in general, but it takes the responsibility of writers, chefs, and farmers to constantly push the boundaries of what we think about because otherwise, we won’t progress."