From Kickstarter to Shark Tank

It’s about 45 degrees outside on a Saturday afternoon in early January, but the gusting winds make it feel even colder. You’d think that the last thing on people’s minds when it’s frigid outside is ice cream, but you’d be wrong. There are easily a dozen people lined up for an afternoon treat at Cow Tipping Creamery, and more keep arriving, eager to cool down even further with inventive combinations of soft-serve ice cream and unique house-made toppings.

The story of Cow Tipping Creamery began approximately four years ago, when co-owner Timothy Sorenson lost his job due to the recession and he and his wife, Corey, found themselves at a crossroads. "We were at a point where we asked whether I should go back to school and re-train and do something new, or should we start our own business," he says. "[Corey] has always been a huge ice cream fan, so we decided to put the money into starting this business."

Cow Tipping Creamery set up shop in June 2012, originally operating on the side of the road on Highway 620. About six months later, they were approached by the proprietors of Rio Rancho to join the then-brand new food court, which the trailer has anchored ever since. "We’ve gone through three rounds of trucks on this lot," says Timothy. "We’re the only original truck on this lot, because we’re consistent and we’re consistently good."

There’s a devoted fan base for the ice cream truck here in Austin, easily raising more than $13,000 in a 2014 Kickstarter geared toward upgrading equipment and expanding packaging options for their signature treats. 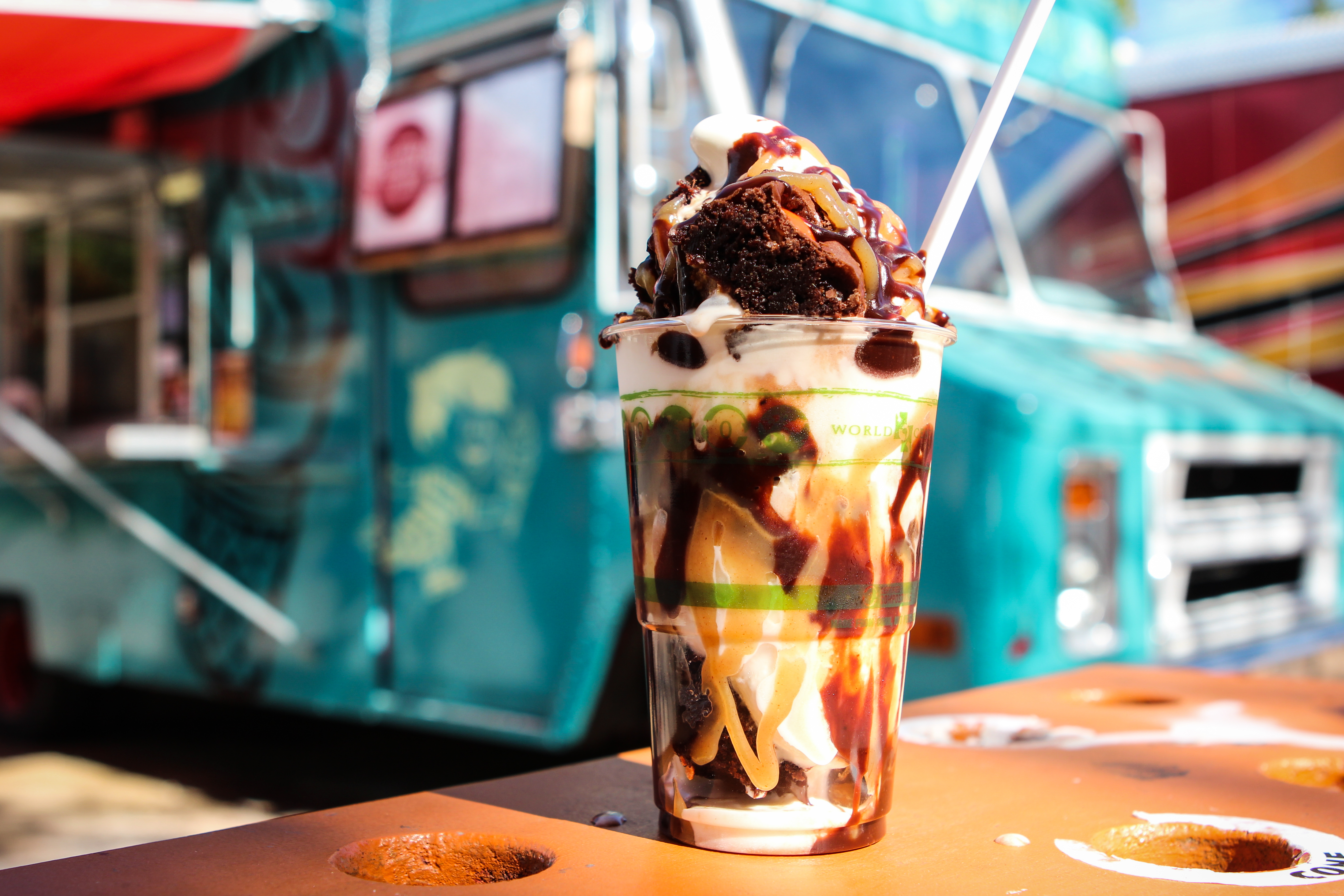 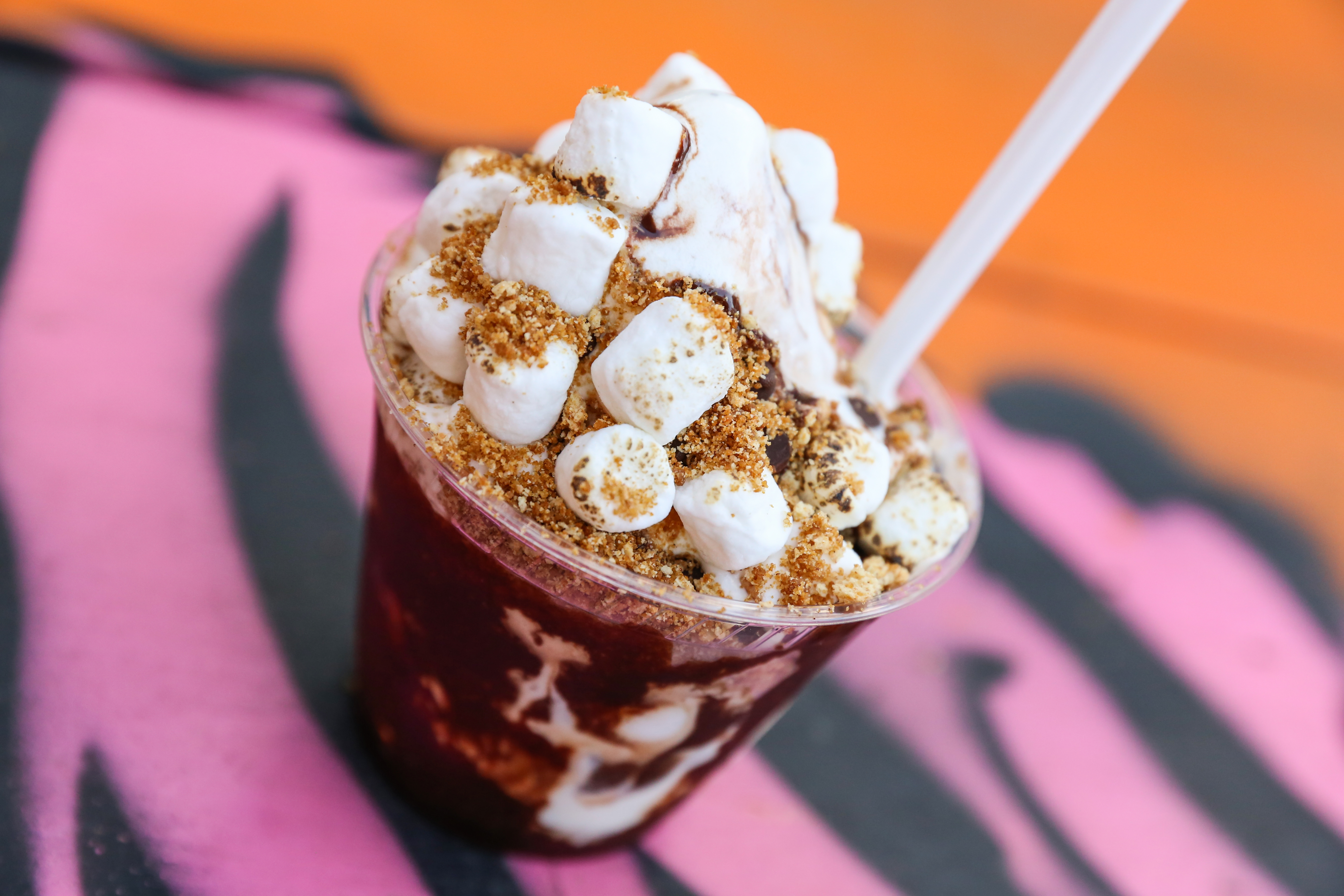 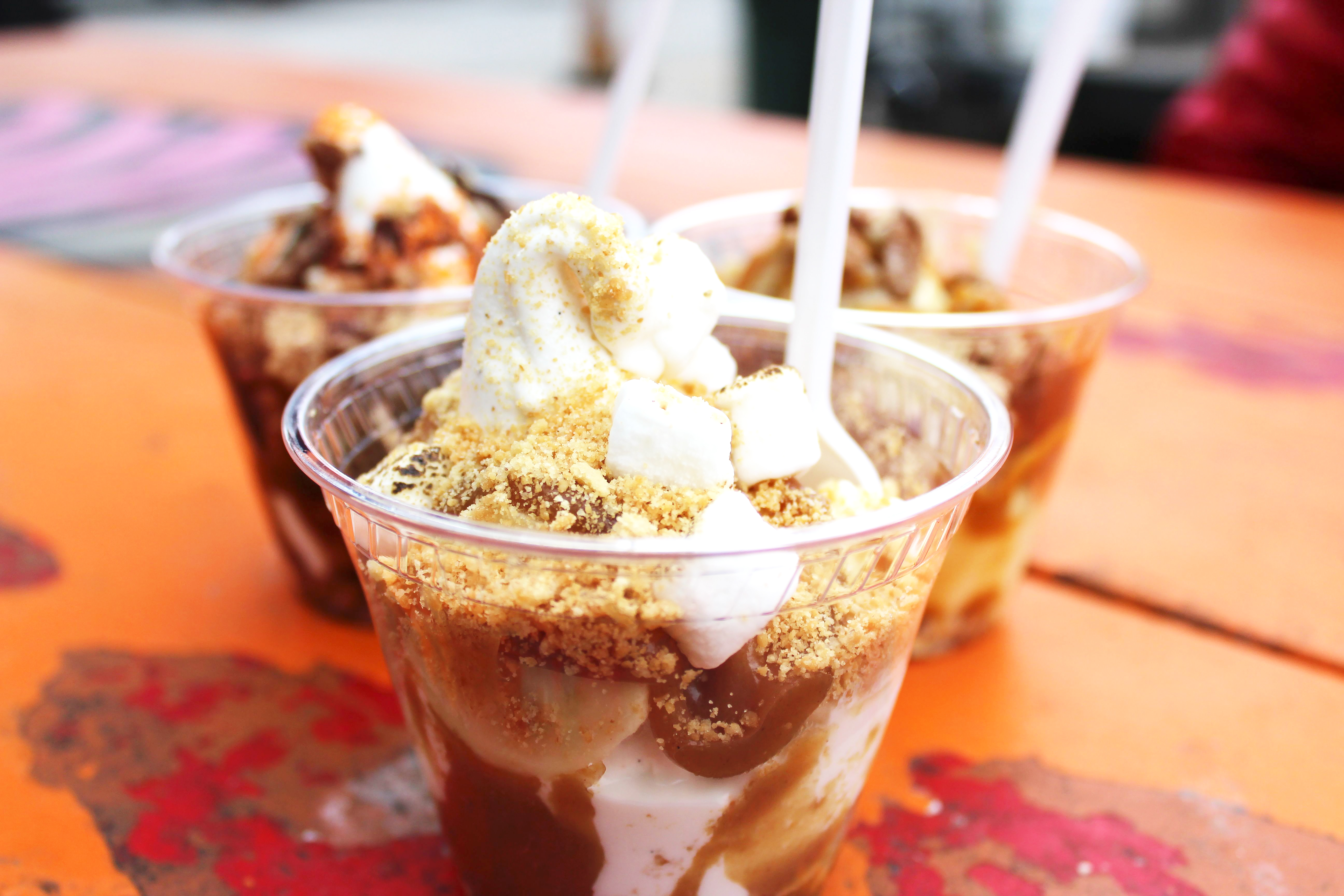 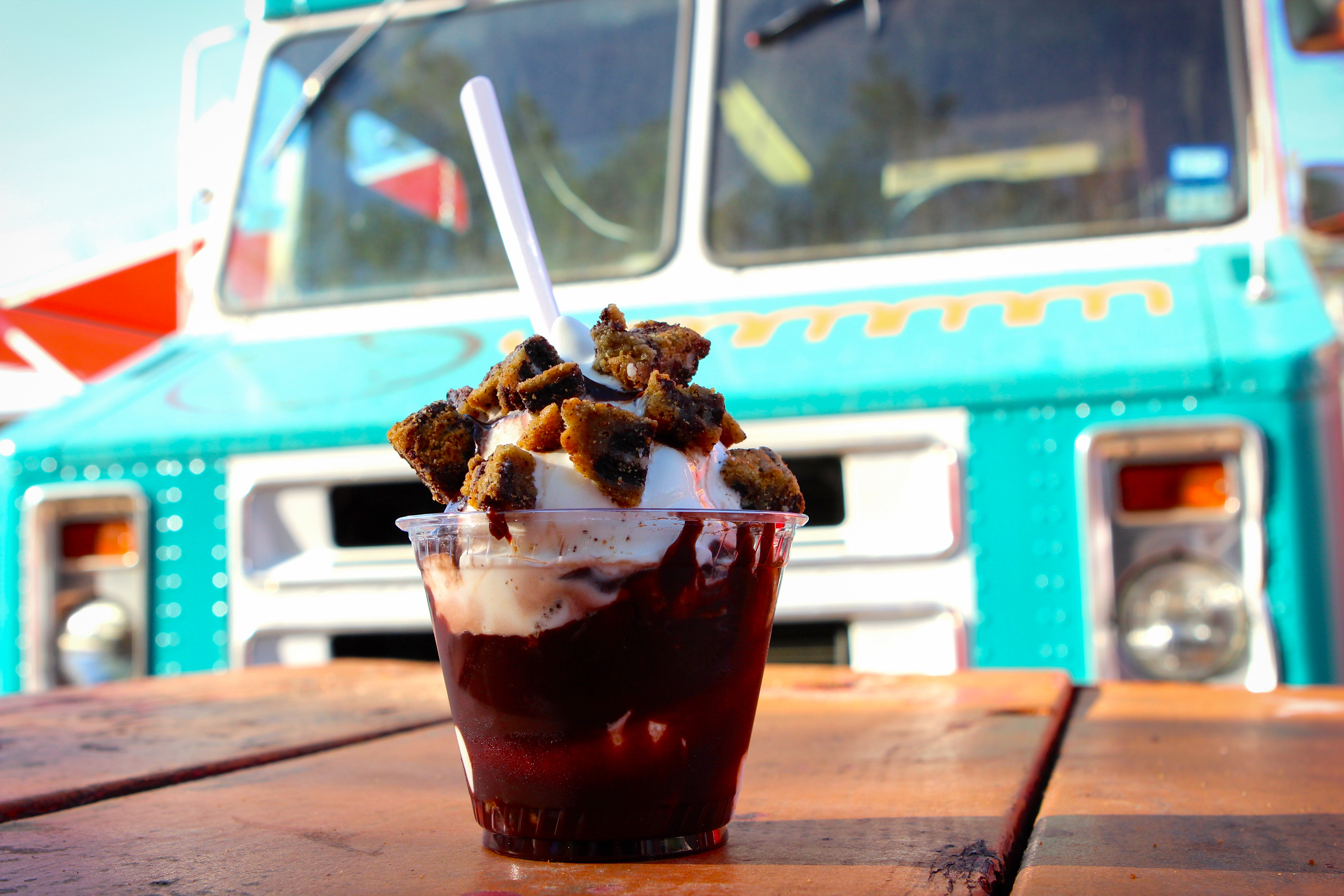 The specialty at CTC is soft-serve ice cream in rotating daily flavors like bananas foster, green tea, red velvet, peppermint cocoa—and that was just during the first week in January. The showcase menu items are the inventive "stackers," elaborate ice cream sundaes where soft serve acts as the basis of a studied composition of homemade sauces in flavors like brown sugar hot fudge and salted caramel, crumbs/soils made from Ritz crackers and Fritos, and toasted marshmallows or fresh fruit (or both). The signature component of most of the stackers, though, is the scratch-made baked goods that add heft and texture to each dish. For example, the NOLA stacker features banana bread pudding; other sundaes have featured chocolate cake ball chunks and hunks of red velvet cheesecake brownie. A lot of work goes into the handmade sweets that adorn the stackers, and Corey makes them all by hand every day. This may not seem like that big a deal until you realize that up until spring 2015, she was also working full-time as a dental assistant.

Last month, news broke that Cow Tipping Creamery would be partnering with Dallas-based pizza chain Cane Rosso to take over the space vacated by St. Philip in fall 2015. This new partnership affords the Sorensons the opportunity to expand its offerings into a brick and mortar, especially with baked goods. "That’s a big part of the ice cream business, is baked goods incorporated with the soft serve," says Corey. "It would be nice for people to be able to buy just the cookie or bread pudding that comes with the soft serve of the day."

Corey is also very excited about the ability to test new recipes in a bigger, well-appointed kitchen, which will allow her the opportunity to develop products for people with dietary restrictions, something she hasn’t been able to do from the truck. There is also talk of collaboration between the pizza and ice cream operations, from dessert pizzas to stackers plumped with Cane Rosso’s zeppolis. 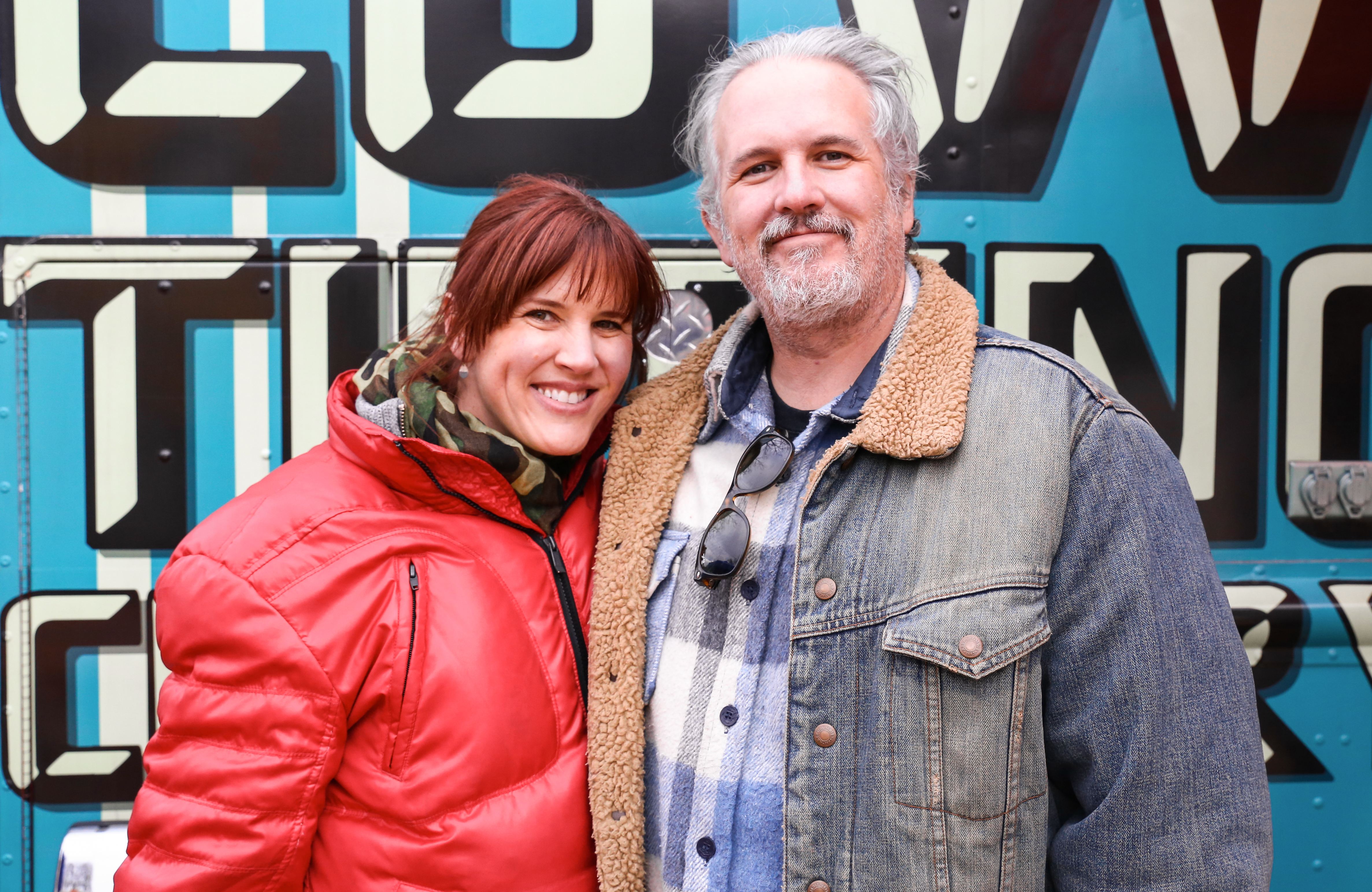 Jeff Amador, former Austin food blogger and previous contributing photographer for Eater Austin turned-marketing manager for Cane Rosso, brought the essential food truck to the attention of owner Jay Jerrier after he relocated to Dallas. "I was really missing Cow Tipping Creamery and told Jay he needed to get them up to Dallas." On a trip to Austin, Amador introduced Jerrier to CTC; he didn’t need more convincing beyond that first visit.

From there, the wheels were in motion for a partnership. "Cane Rosso started out as a mobile operation," says Amador. "Jay has a lot of empathy for people who start up food trucks." While expanding in Austin wasn’t part of the original plan—all parties had their eyes on bringing the ice cream operation to Dallas—when the St. Philip space became available in late 2015, Jerrier seized the opportunity.

The Sorensons, whose son Cole manages the daily operations of the truck, couldn’t be more thrilled with this new business arrangement. While there is talk of eventually expanding to Dallas and Houston along with Cane Rosso, the most immediate concern is gearing up for the imminent Sunset Valley spot, in addition to maintaining operations at Rio Rancho (the truck will stay open). "We’ve gotten this far because we’re great at what we do with ice cream, but when it comes to the next level, we needed someone with business expertise to help us get there," says Corey. "Jay knows what he’s doing and it’s the perfect partnership. All I have to do now is concentrate on making great ice cream and desserts."

Valentine's Day 2023: Eater Austin’s Guide to All Sorts of Celebrations