When Steven Dilley left the world of financial trading, he made a surprising pivot: pizza. With no previous industry experience, Dilley crafts perfect Neapolitan pies at his tiny restaurant Bufalina. The two-year-long construction process was lengthy even by Austin standards, but the restaurant was an instant hit out of the gate, garnering praise from critics and loyalty from diners. The 40-year-old Eater Young Gun talks navigating the crazy permitting process, the differences between working in financial trading and restaurants, and making pizza through the seasons.

Why the move from financial trading to pizza?
I moved back down here. I was ready for a change. A decade is a pretty long time to be in a specific business, especially if you're not necessarily into it. It was either try to finally do this project, or go back to school. It was, 'Okay let's do this. What makes the most sense?'

How was the transition from being a trader to being a cook?
There's something very human about this. It was something I was a little nervous about, because I'm not always up to being socially engaged, but it's been very enjoyable. There's something rewarding about having people come in and have a fun experience, and eat good food, have good wine. When you're looking at a screen that's just full of numbers, you don't get that.

Is there anything you would've done differently from the beginning?
Oh yeah, the entire process. I'm very happy with where we ended up. I would not have changed that. [But] you would typically bring in a commercial general contractor who's familiar with restaurants, code, and stuff like that and I didn't do that. It can take a long time in Austin. You see it all the time. There really is a lot of nonsense involved in it. One thing you can do is hire someone that's experienced. I would've been more comfortable than I was out there scrambling myself, going to city offices, learning about it, talking to people, getting different answers, really not knowing what the hell was going on.

What was the most surprising aspect?
How we were received from day one, which we certainly weren't expecting because we weren't staffed up. We weren't ready. It's probably a good thing, but I was not expecting that at all. We didn't mark a single dollar to marketing or anything like that. The fact that it took so long to build-out, word got out there. We had a lot of support from local media local bloggers as far as giving us some coverage and being excited about what we were doing.

How was that first day?
The first couple of months were very blurry to me. It's funny because the build-out process takes so long, and then you hit a point where everything just goes. You get your final electrical inspection, plumbing, and mechanical. Then, before you know it, your final inspection hits. That's after you've been on one pace for years, and then gears change immediately, and then there it is, 'Whoa, it's time to open.' I recall it being relatively busy. I recall it taking about upwards of an hour to get three four pies out of the oven, because we just didn't know what the hell we were doing. So that made me pretty nervous. Eventually, we settled into something a little more comfortable. 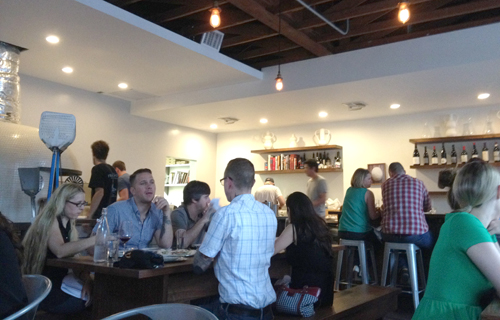 Where would you like to be a year from now?
I like where we're at now. We've run through four seasons, with respect to produce, to the weather and how the oven runs, to how the dough proofs, to our diners on vacation or are they in town, what seasons are busy. I'm hoping we get to the point where we play around a little more food-wise. We're constantly changing the menu, but at times, it feels like there's a lot of other stuff to manage on a day-to-day basis, so you don't have as much time to work on new things as you'd like. Maybe add weekend lunch hours at some point.

Where do you think the future of the Austin food scene is going?
We're getting to the point where Austin should be considered a serious national food destination. I love how certain things have been elevated, like what we're trying to do with pizza. But you see what's happening with barbecue over the past few years. When I was going to school here, it was nothing like that. Hopefully, we can keep the quality heading in that direction.

What's your next project?
I think the scars are still so fresh from the build-out process that I'm just going to enjoy this for a little while. Maybe at some point, we'll do something. But even if we don't, even if this is it, I'm happy with that. I think it's pretty special what we've created here. There's a lot of satisfaction that comes with that. For now, enjoy it, and see if anything happens.
— Nadia Chaudhury
· All Bufalina Coverage [EATX]
· All Steven Dilley Coverage [EATX]
[Photo: Nicolai McCary/EATX]