Share All sharing options for: How Four Austin Restaurants Manage Their Massive Lines

Welcome to Hot Topics, in which food industry people chime in on a major issue in food.

Customers start waiting in line for the chance to eat Franklin Barbecue's legendary brisket as early as 5 a.m. That's dedication. Others wait for New York-style pizza at Home Slice, or the authentic ramen at Ramen Tatsu-Ya, or for smokey meats at La Barbecue. How do these restaurants keep their customers happy in the face of hours-long waits for food traditionally considered fast and cheap?

For Franklin Barbecue, it's expanding slowly to make sure the quality of the food remains high. For Home Slice, it means adding several lines. For La Barbecue, it involves free beer and music. For Ramen Tatsu-Ya, it means hot tea in the winter. Read on for how these restaurants handle the welcome challenge of hyper-popularity. 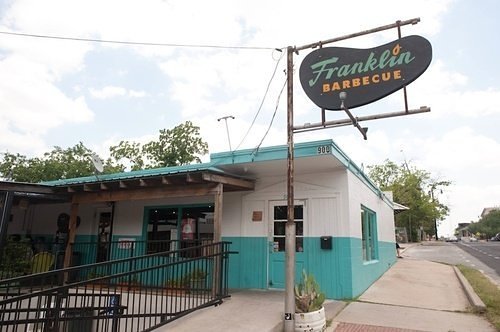 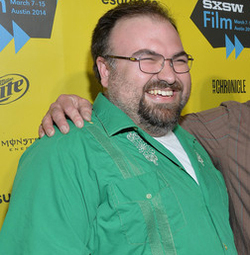 How were customers reacting to the long line?
At first, it was a very hard thing to sell to people. The idea of us selling out was a tough thing for people to understand. People understand it more, but there were definitely angry people. We'd be like, "Oh, you shouldn't get in line because we'll be out of food." They'd be like, "Why? What do you mean? Why would you be out of food?'' Two years ago, that was still a really big problem, but now it's more common and people understand it.

How do you manage the line?
It starts really early on a lot of days, especially on a weekend. We send somebody out right away. We check with the cooks and the manager to see how much food we have, and they go running out. They'll just ask every single person in line what they're going to order. They're out there early educating people, letting them know how long they're going to be there. We're telling people, 'It could be a four hour wait, you might not want to do this," which is still a crazy thing in itself, but we definitely try to be as honest and upfront with people. You don't people waiting two hours and not getting food which they thought they were. It's both a chance for us to talk to people and keep people energized and stuff, and then also to make sure that their expectations were managed. Then we have people out there selling drinks and talking to people.

How do you keep customers happy in line?
A big chunk of what I do during the day is out there making sure people are okay. We have restrooms. We have fans and more shade. We're also going to be putting bathrooms [in the new addition]. We're actively working on having a to-go window by the end of the year to try to make the line shorter. It's a slow process because we're small, and we want to keep it small. We like being a small local company in Austin, but we're working on it.

You just have to work out all the kinks first.
Yeah exactly. We definitely are amazed and grateful at everybody that comes by. We try to make the best possible food and try to make people as happy as they possible can. We're still shocked by it all, so it's very awesome. Meeting people from all over and we actually still have a lot of Austinites in the line.

Do you have any funny line stories?
It attracts a lot of different people. We've had a band play. Some guys came in donkey suits one day, they were a bachelor party from New York. People come with E-Z Up Tents and just keep on working with them down the line as they go up. That's actually pretty common during the summer. It's really chill. People are respectful. It's nice to see people become friends in the line when they may not have ever have interacted in normal life.

Has the line moved faster now with the expansion? Is it any different?
We're very wary of making too much food. We are actually not quite at our capacity yet, because we're working on some things, but we don't want the line to be too long. So this was actually part one of getting the to-go window and stuff ready next. We're not ramping up completely food-wise just because we need to learn how to smoke in that smokehouse and slowly make more food, because we want to keep the quality good. It's a slow process. We usually do about 60 to 70 briskets for a lunch for that line, and that's a five hour long line, so doing it any longer would be cruel and unusual. It's an eventuality that expansion will really pay off when we have our to-go window. It's a crazy thing. We're still not 100 percent sure how we got to where we're at but we are very grateful for everybody that comes. 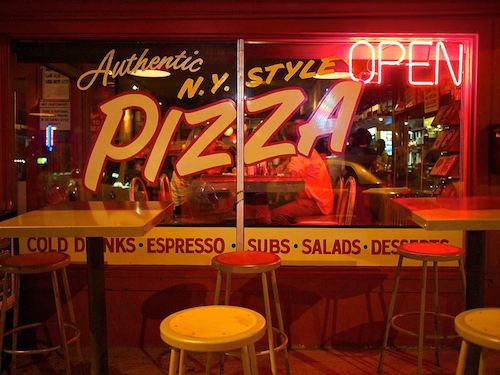 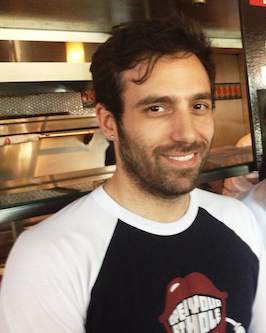 How do you manage the lines?
We have several different lines. If you call ahead, you can pick it up faster in a pick-up only line. The other thing we do is we staff very heavily behind the line, so that the person whom you're speaking to as a customer is taking your money and giving you a laugh, but multiple people are behind them getting your order ready quickly and correctly, so that your food appears as quickly as possible and the line moves quickly.

It's like multitasking with multiple people at the same time.
Yeah, you never want the person talking to the customer to have to break away and do extra things that are going to slow the line down. You want them to be focused on the customer having a good time while somebody else is doing the work to get the food out.

How do you keep customers happy in line?
We put in an outside bar. We have cocktail servers walking around. We added more hosts. We want to make sure that the time you spend waiting is fun and relaxing and that your experience begins when you decide to start coming to Home Slice. It doesn't start when you get your food.

Do you have any favorite line stories?
My favorite line experience has been on really hot days, where we just take our Italian chocolate or lemon ice and just give them out to the line, or we just cut up rice krispies. We just go out and have fun with the line and we like to give things away.

Is there anything else you'd like to add?
At the end of the line, or the front of the line, the essential thing for Home Slice is that when you get to talk to somebody, they really care about your order, they really care about your experience. We work really, really hard to make sure that food and drinks come out quickly, so that the line moves fast, but we do not want to skimp on the experience that you have with the person you're talking to at the window or the counter. It's so important that we honor the effort of the customer who's waited in the line and that we're not too cool for school and that we really appreciate the effort they put in. I went to Franklin and I was so ready for them to be totally over us as customers, and I was so blown away by how kind and how what great hospitality they gave in that line. All I could think was, "This is why this is working," because if you got to the counter and the people were just gruff with you or looking past you at the next hundred people waiting, then you wouldn't come back. And we try to do the same thing. 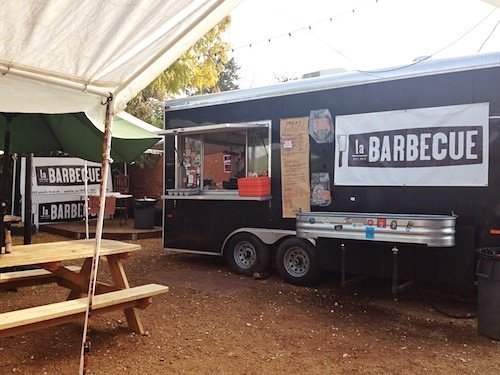 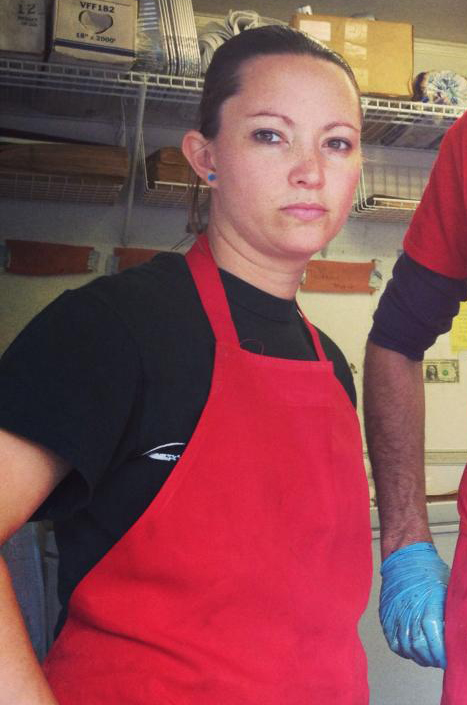 When did you realize that lines were going to be part of the La Barbecue experience?
We realized we that lines would be a part of our daily service the day the Texas Monthly 50 Best Barbecue Joints hit the stands. The list came out May of 2013. We not only had neighbors coming in to stand in line, but people traveling from all over the world. We have fantastic customers. Many of them look at standing in line as part of the experience at our place, making friends with the others in line, and talking about their other barbecue adventures. We still get smiling faces from each customer as they make it to the serving trailer for their burnt end sample.

How do you manage the lines?
We have tried a couple of different serving techniques to try to speed up the line as much as we can, and have finally found one that has seemed to work for us. We moved the trailer around a few times trying out different settings and placement for the cutters and to-go packers. We added a second cutting station for ribs, turkey, and sausage to get the meat on the tray faster and get the line moving along.

How do you keep customers happy in line?
We wanted to make the line experience as painless as possible, LeAnn [Mueller] introduced free beer and live music for all the customers to enjoy and to pass the time. We have been very fortunate to have Frank [Mancuso] from Saint Arnold [Brewing Company] come out several times to hand out beer and mingle with the people in line.

Are there any good line stories that you can think of?
It is funny, because people don't know, but we can hear everything from the line in the serving trailer. We love to hear people talk about barbecue and the history behind each barbecue family. We have heard many stories about the night before, relationship problems, and barbecue people hated. 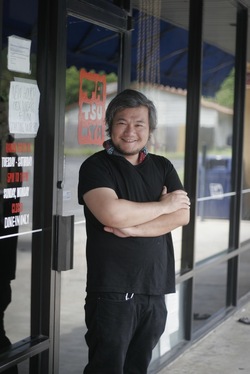 How do you manage the lines?
We started to have a person assigning seats after a couple weeks of opening. We found that assigning seats maximized our very small 38-seat dining room. Structuring the kitchen fit for service, emphasizing running food, and being quick to respond is part of our training.

How do you keep customers happy in line?
We are very limited to what we could do, but by researching other restaurants with lines, we decided to, on busy nights, add an extra person to educate people on our menu or any questions people have for the shop. I think the added touch of water service when it's hot, and hot teas in the winter, go a long way. The extra person (we named 'Ghost,' like Casper the friendly ghost) gave away to more face time to customers and efficiency in ordering with the cashier.

Are there any good line stories that you can think of?
There was a time when we successfully did the wave.
· All Franklin Barbecue Line Coverage [EATX]
· All Hot Topics [EATX]
— Nadia Chaudhury