The Austin Food & Wine Festival: Epic Reveals, Rocked Tacos, and Many, Many Chefs

Share All sharing options for: The Austin Food & Wine Festival: Epic Reveals, Rocked Tacos, and Many, Many Chefs

Editor markup for AFWF 2014 Highlights. This is only visible in the story editor.

The Austin Food & Wine Festival has come a long way from its first, dusty year. The festival has continued to deepen its commitment to the Austin dining scene, and to its attendees who drop a serious amount of money on passes. This year's festival featured a plethora of celebrity chefs, lots of great bites from the best of Austin and beyond, and fun pageantry like Jack Allen's fire truck rotisserie palace and a reveal of Contigo's new restaurant, Gardner.

Did you not have the bucks for a $250 or $850 pass, or just want to re-live your blurry, free-boozy weekend? Read on for Eater's huge recap, and please do share your thoughts below.

— The festival's Taste of Texas kick-off at Republic Square Park did a solid job of featuring chefs from all of Texas's major cities. Those who splurged for $850 Savor badges (or $150 "add-on" tickets with their $250 wristband) queued up early and eagerly roamed the park for bites from 16 high-end Texas restaurants. Yes, there were lines, but overall they moved quickly. Unsurprisingly, Uchi's was the longest. 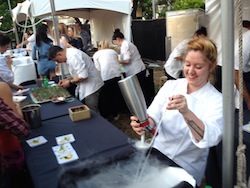 — The dishes served skewed toward the meaty, with highlights including a generous fried lamb rib from Pass & Provisions and beef short ribs from Louie Mueller Barbecue. There were also lighter counterpoints: Justin Yu's veggie fritter mixed kale and root vegetables into an unexpected treat, and Jason Dady's crab and crispy rice salad was a refreshing dish in the early evening heat.

— The Eater favorite was Ramen Tatsu-Ya's take on "bacon and eggs," which featured one of their soy-marinate eggs filled with house-made bacon. It was refreshing to see a restaurant take a signature menu item and re-invent it as a festival bite.

— While Texas chefs were everywhere, it was surprising to note that the Friday night event featured no Texas beers, wines, or bands this year. There was a single Texas spirit (Tito's Vodka) available as part of a Mule cocktail. Wine options were limited to those from the Coppola brand, while beers came from Stella Artois, Leffe, and Hoegaarden. Escort, the Brooklyn act featured at the party, were a pleasant mix of original (and heavily late '70s influenced) disco and dance music.

— A "Sips and Sweets" after-party followed at Mellow Johnny's, where the evening's chefs mixed with festival guests while pastry chefs like Erica Wasmunski (Congress) and Janina O'Leary (LaV) sampled a variety of their creations for the crowd. 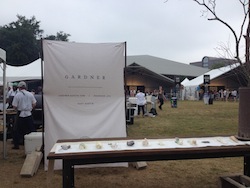 — Contigo's Andrew Wiseheart and Ben Edgerton generated serious buzz by unveiling their new restaurant at the festival, Gardner. Their beautiful waxed vegetables apparently drew many, many questions over the course of the day.

— Tim Love's grilling demo, now extended to both days, was as insanely popular as ever. One couple of Savor (read $$$) passes remarked that guaranteed access to the Tim Love demo was the only real reason to buy the passes. 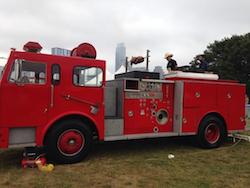 — Jack Gilmore debuted his fire truck rotisserie palace (its official name) at the festival. Apparently it arrived only the day before, and Gilmore had little time to test it out. The truck (appropriately) dispenses Fireman's #4 beer, and will soon also feature a frozen margarita machine.

— The Carillon's Josh Watkins served pork rib w/ black garlic sauce, which he said is a preview for an upscale barbecue restaurant he has in the works. 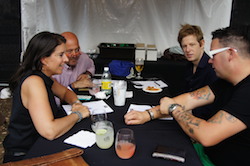 — The surprise judge at Saturday night's "Rock Your Taco" contest was Spoon frontman Britt Daniel, who is in town finishing up the band's next album. Daniel was spotted at the judge's table asking questions about the origins of Graham Elliot's many, many tattoos.

— While Taste of Texas was relatively orderly, line-wise, "Rock Your Taco" was much more defined by huge lines. Lines for Ming Tsai, Richard Blais, and the Uchi team converged in a terrifying snarl in the center of the park.

— If festival organizers made good money on the 2014 festival, they might consider investing in more mobile fryers for team Uchi. The restaurant's wildly popular puffy taco was served piping hot, but the "cooked to order" style led to 30 minute waits for the dish. Enterprising larger parties kept one friend in the Uchi line while running to other stations for additional tacos.

— Since apparently 14 taco samples in an evening isn't enough, Andrew Zimmern later posted photos from a late-evening feast at qui.

— Statesman food critic Matthew Odam and Fed Man Walking Mike Sutter both posted Twitter notes of dismay upon hearing that Richard Blais had won the taco competition - not because they disagreed, but because they'd not yet made it to the booth when Blais ran out of the dish.

— A longtime friend of Jack Allen's Kitchen chef Jack Gilmore was repeatedly mistaken for mustachioed actor Sam Elliott at the event. Gilmore's PR rep said that "he's such an [Sam Elliott] doppelgänger that door staff let him into the festival without checking for a wristband."

— The consensus Top 4 tacos among many in the audience: David Bull's "Black Heart" morcilla double decker, Bryce Gilmore's "Goat revolution," and a searing cochinita pibil from Rick Bayless, and the Uchi puffy taco. Long lines and an early close for winner Blais's station meant that many didn't get a taste of the eventual winner. 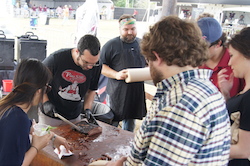 — On Sunday morning, instead of running his usual massive line, Aaron Franklin encouraged festival goers to crowd around a butcher block by his fire pit tent while he served up ribs, turkey, and of course, brisket. Franklin was affable and friendly, as always, and happily dispensed tips to home smoking enthusiasts. The crowding-around worked for awhile, but eventually there was a line to join the non-line.

— Sunday was hot. Like, really really hot, the kind of heat Austinites dread and yet know is coming. Ice cream, booze popsicles, and wine slushies were the rule of the day.

— A couple in line for Bryce Gilmore's goat taco, who'd also bought $850 Savor pass, echoed concerns about the lack of local Texas beer, wine, and spirits at the festival. Overall they called their experience "totally worth it," though they debated whether it might have made more sense to buy the cheaper "Taste" pass and then buy tickets to the nighttime events separately.

— Ray Isle's wine pairing seminar featured an unlikely food: multiple bags of Kettle chips. Isle mentioned that the idea was a late switch-up after festival organizers put the kibosh on many of his ideas (smoked salmon, soft cheese) due to the weather forecast. Isle's idea paid off: the regular, cheddar, vinegar, and BBQ chips placed at each table plainly showed the glories and pitfalls of good and bad flavor pairing.

— The Texas barbecue panel, which featured both Wayne Mueller and Aaron Franklin, as well Timothy Rattray of Granary 'Cue and Brew in San Antonio, was full of some real gems amidst the deep meat rub nerdery. Aaron Franklin decried the equipment advice that made barbecue "a rich man's game," and encouraged enthusiasts to weld their own cookers and generally go DIY. Wayne Mueller remarked that Central Texas barbecue seemed in danger of dying off in the 80's, and that today's revival was unthinkable.

— After all the protein, sometimes people just need veggies. Tapas Bravas was overwhelmed by festgoers in the tent for brussels spout samples. 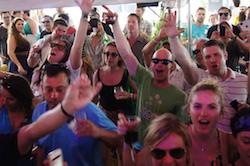 — As the last call loomed in the festival tent at 3 p.m., Tim Love jumped onto DJ Mel's raised DJ booth and joined the rather intoxicated crowd having a dance party. After packing up their samples, many vendors joined in on the waning moments of the partying. Jack Gilmore cut a rug (grass?) to "Shout."

— By the bike racks, a group of festival goers compared notes with friends who had also attended Aspen Food & Wine. Their verdict? Austin Food & Wine was "more fun," and Aspen definitely didn't have such a "rockin'" wrap-up.
· All Austin Food & Wine Festival Coverage [EATX]
-Reporting by Tom Thornton and Meghan McCarron