Today is April 1st, which means the internet is full of jokes, pranks and generally untrustworthy information. Local restaurants have hopped in on the game too with taco smoothies and soup-inspired therapy services. Eater has rounded up the best of the Austin-centric pranks so far, and will update this list throughout the day.

Catch a restaurant doing something silly, or what you at least hope is a prank? Drop it in the comments or down the tipline. 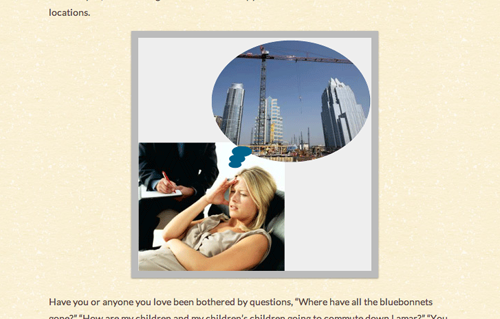 Longtime Austin restaurant/soup delivery service The Soup Peddler announces they're now offering "Civic Growth Therapy Services" in order to diversify their portfolio. From their blog: "Have you or anyone you love been bothered by questions, "Where have all the bluebonnets gone?" "How are my children and my children's children going to commute down Lamar?" "You want how much for a hamburger?" Have you ever woke up in a panic because you dreamt you were downtown and were so disoriented you couldn't remember where Liberty Lunch was?"

Black's Barbecue hits Facebook to post what is surely one of Austin's least elaborate April Fools jokes. They write: "Due to an unfortunate accident, we have lost the recipe to our Homemade Sausage and will be taking it off our menu ...April Fools!"

Texas Monthly retweeted a post from 2012 about Franklin Barbecue introducing a "meatless Monday" that will focus on "vegan brisket." On the brisket: "Made out of stacked kelp stems and seitan, the vegan brisket is then wrapped with a tofacon weave to give it more integrity."

The magazine's prank this year is a story about Matthew McConaughey for Agricultural Commissioner. "'When I saw that Kinky, who's basically in the same world that I am, wants to legalize pot farming, that's when I told my amigo Woody, 'I could do this job,' McConaughey said."

More updates will be added as they come in.

Kevin Williamson, Founder and Chef of Ranch 616, Has Died