Welcome to The Gatekeepers, in which Eater Austin roams the city meeting the fine ladies and gentlemen who stand between you and some of your favorite hard-to-get tables. Next up: Bill Mann of Qui. 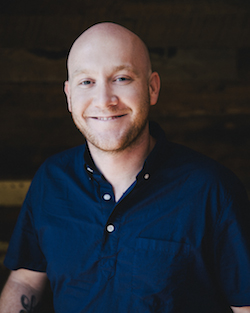 Eight months after its initial opening, Qui remains Austin's most buzzed-about new restaurant. Paul Qui's East 6th flagship quickly shot to the ranks as one of Austin's toughest tables, even after rolling out a system of limited reservations. The restaurant's constantly evolving menu has drawn praise from local and national press alike, and the staff all recently went and got matching tattoos.

Eater spoke with Qui's General Manager Bill Mann about running Qui's front of house. The restaurant notably trained their entire staff together, a move that Mann says was a valuable part of creating the restaurant's culture. A native of southeastern Pennsylvania, Mann's diverse resume includes managing everything from Goldman Sachs' corporate dining to Brooklyn's beloved Prime Meats. Read on for tales of pleasing Paul Qui superfans, orienting walk-ins who wander into the unmarked building, and getting more diners trying blood stew.

You moved here from New York to help open Qui. What brought you to the restaurant originally?

I was the GM at Prime Meats in Brooklyn before I moved here. I knew I wanted to move away from New York, and I knew I wanted to open a new restaurant. I'd been in New York for close to eight years, and my time I was up. I'm not a native New Yorker. I loved it, I wouldn't trade my time there for anything, but it was time to move on.

Opening a stand-alone restaurant was not something I'd done before. I pulled all the lists of all the most anticipated restaurant openings of the year and started sending in my resume cold. June and Paul got back to me in short order and we had a series of Skype interviews and said, let's do it.

Why did you think Qui would be a good fit?

I connected with Paul and June right of the bat. Both had such great reputations, too. It seemed like if I was going to take a big gamble, this was a good one.

How did you get your start in the industry?

I've been working in restaurants since I was fourteen. I didn't go to school for hospitality management or a culinary degree. But I did work in restaurants full time all through college, and once I graduated I just went to work in the field I already knew. I started at the Crown Plaza Hotel in Allentown, PA as the food and beverage manager. After the hotel I took over a restaurant manger for a small restaurant in Allentown. God help us, the name was Fusion Grill. Let's just say there was a lot of coulis on the plates. After that I went work in private clubs in Philadelphia, and then when I moved to New York, I did private dining for J.P. Morgan and Goldman Sachs. I was at Goldman for the financial crisis.

Those were wild times. Not long after that we opened their world headquarters. I am glad I went the corporate dining route. I don't have a formal educaiion in the business, so I looked at it like I was getting paid to be educated. When I opened the Goldman building, it was a fifteen million dollar piece of business. Who else is going to give you at fifteen million dollar business and say, Here, kid.

After Goldman, I took the very opposite job you could find in New York, and that was going to work for the Franks. I was hired as a GM of Prime Meats, and I did that for two years.

What do you think of Austin so far?

Everybody has been so genuinely nice. One of the biggest differences I'd say between Austin and New York, besides all the obvious ones of scale and size is that here, you make friends with people. If you say, Hey, let's get a drink sometime, you actually get a drink.

Before Qui opened, there was a lot of talk about how you guys were training the whole staff together. How has that played out over the past few months?

That process was a really good for a variety of reasons. It set the tone for our culture as a restaurant, that we are one team. We really seek blur the lines between back of house and front of the house here.

There's a real value to everyone who works in the restaurant having the same information. If the guest has question about anything, whether it bet a drink or a dish or about Paul, we all can answer it intelligently and are comfortable doing so.

How is it different working in a restaurant where the chef has a high profile due to TV appearances? Are there more questions about Paul?

You definitely get Top Chef fans coming here to meet top chef Paul Qui. We're very happy that they want to come here to see him, and Paul is so amazing in how he handles his celebrity. The concept of celebrity was not something I was totally used to before coming down here to work with him, and he handles it certainly way better than I ever could, and better than most do when put in that kind of spotlight.

Is there an aspect of service you especially value, or that you look for when hiring?

What I value most in service is taking ownership of our guests' experience. When I'm hiring people, I'm looking for a level of care, that they're going to take ownership. As long as you use that as that's your compass when making a choice over the course of service, and caring for our guest, you're usually going to have the right instincts make the right decisions.

What do you mean by 'ownership'?

From the moment a guest calls to when they walk through the door, all the way through their meal until they leave, you're providing experience to guest you would want to have on your own, and the clear vision Paul wants them to have. Let's face it it's not the most approachable restaurant in town. We don't have a sign on the front door, and there are ingredients and dishes that a lot of folks aren't familiar with.

So we make sure that those who are more adventurous have the option to geek out as much as they possibly want. If they want the story of the chicken like from Portlandia, we're here to offer that to them. If they're just here enduring a dinner because their partner is Paul Qui megafan, and they'd rather be at steakhouse, we are doing absolutely everything we can to make sure they're comfortable and enjoying themselves.

As the menu has incorporated more Filipino influences, are you translating more?

Those are the items that our guests are least familiar with. That's going to change over time. There's definitely a rise in Filipino influence in modern American cuisine. But for now, dinuguan is not a menu item that many people are familiar with or are comfortable ordering. Yes please, I will have the blood stew. It's not something that everyone is comfortable saying. We know it's an amazing dish and if we can get you to try it you're going to love it. That ties back into taking ownership of their experience. Making sure we're giving people opportunity to try things, and also recognizing how far out on the edge they want to go.

It changes night to night, but you're looking at over two hours. There won't be a wait for our pulutan menu on our patio. Our overall capacity is 24 seats at tables, so there' s not going to be a wait for a four top. This spring and summer we'll try to give this patio its own identity, rather than just as a holding area.

There's not any one particular Qui crowd. Our guests fall into three large categories. We've got Paul Qui superfans, folks who either are big fans of his time at Uchi and Uchiko, or East Side King, or from Top Chef. You get people who are coming in out of sheer curiosity. It is a buzzed-about restaurant, and they want to come and see what we're all about. They look at a menu online see some weird things, that draws a certain type of diner.

And we get plenty of walk-ins of the street who have no idea what we are. We're the unmarked white building on the corner. Every night people walk in saying, What is this place? Not only is there no sign, there's two possible entrances. We make sure that whoever spots them, whether it's a cook or cocktail server, comes out and says, hey, come on in, and shows them a menu.

Do you have regulars?

Lot of regular industry people. A few carryovers from the Uchi restaurants, though I assume they're maintaining their regular status at the other restaurants as well. Discerning diners.

What's your favorite time to be here?

Eight o'clock on a Saturday night. That's when we're making our greatest impact as a restaurant. It's really an opportunity for us to practice what we preach. Paul embodies humbleness and lack of pretention, and I think pretention can be perceived when somebody's flustered. Making sure none of us are ever look flustered so as not to give a false impression is very important.

We're all in it for the rush. There's definitely a buzz that you feel when we're almost going off the rails. Keeping it on the tracks is a really good feeling.

Say the restaurant is slammed and a VIP comes in? What do you do?

We are very democratic here. We do take reservations and we honor our reservations, but outside of that we're first come first serve. If a VIP comes in, we're going to take great care of them on the patio, but they're going to be waiting for the same amount of time as anyone else.
· All Qui Coverage [EATX]
· All Gatekeepers Interviews [EATX]
[Photo: Qui Restaurant/Official]