The Uchi group's forthcoming Sunset Valley bakery and restaurant St. Philip will have a serious pizza component. Uchi director of culinary operations and Beard-nominated pastry chef Philip Speer shared some details with Eater, and discussed why pizza will be such an important part of the restaurant. He also shares his favorite places to eat pizza in Austin, including Via 313 and Pieous. Read on for more.

Pizza is definitely a predominant part, as much as the scratch bread sandwiches and adjacent pastry shop. We want to be considered a pizza place.

We're spending all our time developing pizza right now. We've been in the kitchen for weeks and weeks, and will be for weeks more. We'll be serving hand-stretched 12 inch pizzas, so you can get a couple and share, or eat one pizza and share some other treats.

One thing we want to stay away from is being pigeonholed as this or that style of pizza. We're not trying to duplicate a style, we just want to do something really delicious using pizza dough as a canvas. We're using a deck oven. Some will be very classic, and some will be adventurous. 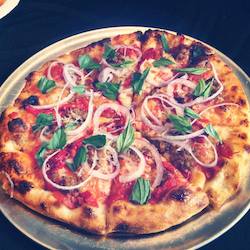 Where do you like to eat pizza in Austin?

I like Homeslice. Their style is sort of a hybrid of New York and Connecticut. During Southby, I took some of the members of The Gorillas and Mars Volta to Via 313. We went and had eight of their pizzas, and I really enjoyed it. Salvation is great, too. For Neapolitan, I like Backspace. I like what Pieous is doing too.

Why did you want pizza to be an important part of the restaurant?

Pizza is a literal breaking of the bread. It comes back to the St. Philip reference. It's something that you share with your friends and family. Pizza can be so neighborhood-y, and so many different groups of people can share it. A group of teenagers share pizza, adults grab a pizza and beer, and a family with kids can share it too. That's why it's such a classic food in our culture.
· All St. Philip Coverage [EATX]
[Photo: St. Philip/Facebook]

St. Philip: A Timeline of Uchi's Just-Opened Pizzeria and Bakery