One Weekend In with Daniel Brooks of Licha's Cantina

Share All sharing options for: One Weekend In with Daniel Brooks of Licha's Cantina

Welcome to One Weekend In, an occasional series when Eater checks in with restaurants after their first few days of service. First up: Daniel Brooks of Licha's Cantina. 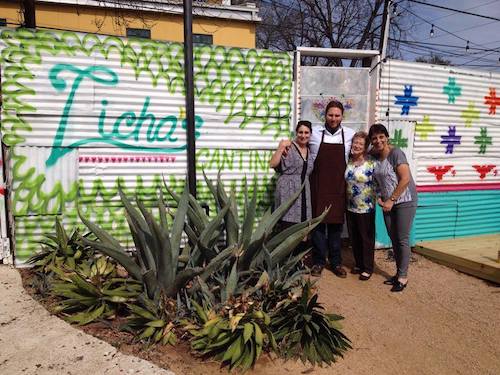 Daniel Brooks cut his teeth in the restaurant industry as the GM of South Congress's Vespaio, and helped open Bridget Dunlap's Mettle. The Mexico City native is striking out on his own with Licha's Cantina, a casual restaurant inspired by the cantinas of his hometown. Brooks spoke with Eater about weathering Austin's server shortage, pleasing his fellow "Chilangos," and the coming hoards of SXSW.

What were some of this weekend's good and bad moments?

Definitely the good moment was how we did some business without a big opening announcement. That's due to the great location we're at. What that creates is knowing that we better get ready very soon, and that we're going to get super busy during the next couple weeks. It's not bad but it's a lot of pressure to have everything down.

I'm doing front and back of the house. I'm gonna finish training back of the house so I can be out in front and great my guests and organize my team out in front. The food is coming with good flavors, now it's just presentation and creating a system of what's going to be selling. There's some items I thought people would for sure order, some of my favorites, that not one person ordered. It's about making a menu for the general public and not for yourself.

One thing I did notice is we did get a lot of Hispanics coming in. I'm from Mexico City and I can spot a Chilango from a mile way, it's classic. I love that there were a couple Chilangos at the restaurant. They ordered tacos al pastor, which is a staple in in Mexico City. I went up to them and said, "Are you enjoying everything? " in Spanish. They're high maintenance, and they will tell you if they don't like it. I could tell it was hurting them to say, "It's really good." You don't expect good tacos al pastor here in the US. Mexicans from Mexico City saying, "Yeah it's pretty good" is a big deal. They didn't want to be boisterous about it but I got the nod.

The menu has a lot of items you don't usually see in many Mexican restaurants in Austin. Are you getting a lot of questions, or are diners familiar?

I went back and forth on how I should write the menu. Just like at Vespaio, the name of the dish is in Italian and description is in English, and that's the format I took over here. But some friends from Mexico didn't know that tuetano is bone marrow. Saying 'exotic' sounds silly to me because its' everyday food. It's about making sure staff has product knowledge.

I don't' want it to be a formal dining experience but I do want a professional, knowledgeable, urgent service experience. When you first open up a restaurant, a cantina, you don't get many experienced server applicants. Why would an experienced server leave a high end place to work at a cantina on East 6th? I'd much rather hire people with good manners and good character. I'll take the time to train them about food and spirits.

South by Southwest is right around the corner, and you're on East 6th. What are you doing to prepare?

I know that what ever happens in month of March is not what we can count on for the rest of the year. The March menu will be different and streamlined for good fast and furious food. In Mexico City subway stations, there's ladies that go around selling basket tacos. I was thinking that would kind of be really cool to do here. Set up some baskets on front lawn with different flavored tacos and different salsas. The other thing I need to take into consideration is that I don't have a walk-in, so I don't have a place to keep back up beer cold. I have to come up with a storage solution for that.

It's gonna be crazy, we're right in the heart of it. We will let you know you know if it was the worst nightmare or a success. It's the prefect set up for one of those worst nightmares. When you can't catch up, you're not in the weeds, you're in the woods. But that's a good problem to have - too much business.

Any other highlights from the weekend?

My mom, my grandmother and my dad from Mexico City visited, blessed the place and brought in good vibes. My mom and grandmother are both Lichas, so that was a great moment. Just having my sister help me out on the door. You always dream of having a family business.

I kept telling my staff, this past weekend is the worst we're ever going to be. From now on, we're going to keep improving and polishing a very efficient system. I know people are coming to check us out and especially with reputation we have to live up to, no pressure.
· All Licha's Cantina Coverage [EATX]