One Year In with Brandy and JT Egli of Craft Pride

Share All sharing options for: One Year In with Brandy and JT Egli of Craft Pride

In February of 2013, JT and Brandy Egli opened Craft Pride at the corner of Rainey and River Streets. With the 100-tap Banger's just a block away, a second craft beer bar could have been overkill. Thankfully, Craft Pride's hyper-local focus set them apart: every tap on their wall is dedicated to beers brewed in Texas. Such a large Texas-only offering had never been attempted, and beer nerds quickly flocked to partake in the frequent rarities and one-offs on the Craft Pride list. Later in 2013, the bar added food service through a partnership with the well-regarded Via 313 Pizza. Eater spoke to the Eglis last week to learn more about their first year, the bar's spring event plans, and the word "nitrogenate".

The idea of going all Texas with your tap wall was considered by some to be risky. What was the origin of that idea, and what prompted you to go forward with it?

Brandy Egli: We moved down here in August of 2010 and attended the very first Austin Beer Week that October. We actually started with a different plan, but when we went to ABW, we were totally blown away. By December we had changed our business plan because of that experience. Tasting the beer and the creativity, we just got wrapped up in it. We wanted to be part of that community and we knew the beer was really good and it was going to take off. There was no doubt in our minds that Austin was going to be a big beer town.

JT Egli: We'd been into craft beer for quite a few years, and I'm definitely not knocking any of the other states. Fantastic beers are coming out of Colorado, Washington, and obviously California. But we felt that some of it was getting a little stale and stagnant. People weren't really pushing it. That first Austin Beer Week was just crazy beers we'd never thought of and it really excited us. We instantly became focused on just Texas craft beer.

Brandy: Throughout that day, we made notes, then looked at each other and said, "This is going to be big. We need to talk."

Since you first opened, what sort of changes have happened at Craft Pride? What lessons did you learn along the way?

JT: When we first started, we had good response from the breweries but we had five taps from this brewery, and six from that brewery. So it wasn't difficult to fill the wall, but we didn't have a lot of producers. I think we started with 17 breweries. I think we've now gotten as high as 24 on the wall. The big change has been speed. "We've got to push this beer so we can blow that line so we can put this one on!" We always have new beers waiting to go on. "We've never had this before. Quick, get it on the wall!"

Brandy: Yeah, it's really exciting. And beer seems to move more quickly off the wall all the time. We're always excited, because we know what's on the other side of the wall waiting. We're making plans for what's going to come in. Our nitro program was also a big change - we nitrogenate in-house.

JT: We designed our tap system - it's completely state of the art and completely hand built. All our manifolds are custom for our application. We started with two nitro taps, but we actually installed a nitrogen generator in our back office, and pull nitrogen out of the atmosphere. Then we added a nitro fill station in our walk-in with the intention of persuading breweries to give us still, completely flat kegs, and we'd nitrogenate them. You get a bunch of beers that you've never had before served on beer gas instead of CO2. It took us about four months to persuade the first brewery to do it.

Brandy: There's a lot of trust involved, and we're very respectful of that.

JT: We would have the brewery come out and taste it before we would sell it. And make sure they approved. Circle was the first one. They came, and ran a $150 tab on their own beer! They loved it so much that they added a nitro station at their brewery. Once the first or second brewery got on it, we've just been bombarded. We have beers coming from Twisted X, and right now we have the Valkyrie Double IPA from Southern Star which is absolutely amazing. So brewers are letting us experiment, and saying, "Here, see what this one will do." 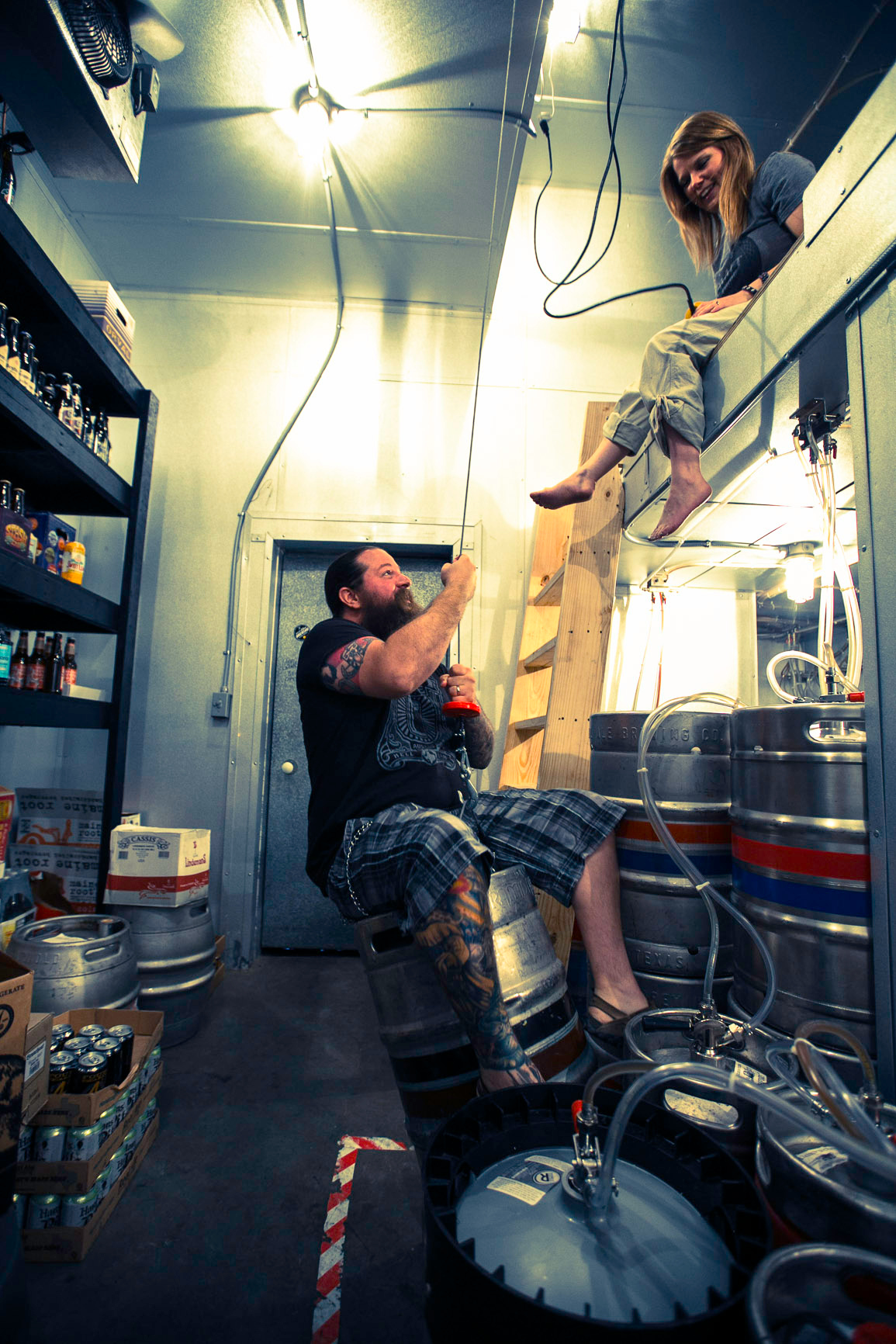 How was the bar's initial traffic flow? Was the demand level what you expected? Was there a big demand for food?

Brandy: When we opened we expected the foot traffic to take a little time to find us. The street felt like it stopped before it got to us. Not so much now, but six months ago you'd walk down the street and it still felt like it came to a stop at a certain place. But the world got out, and more people are venturing down. It's grown and picked up and there is more foot traffic down this way now. The restructured parking situation has also increased traffic. So, I think guests are finding us. There is also good media coverage about us. That certainly increased business as well.

What are the pros and cons of Rainey Street in your opinion, having now been here for a while?

JT: We had a very specific concept in mind. It was black and white to us. We knew the music we wanted. And for the most part, our target patron is what we get Monday through Thursday, and even Friday and Saturday up until a certain hour…but then, unfortunately, it just becomes a bar. Not that it's a bad thing.

But the mid-to-late evening weekend crowds are different.

JT: Exactly. People come in and say: "What's the highest ABV up there?" They don't give a shit what they are drinking - they just want to get fucked up. That was not our target audience. If it were, we could have build a shot bar on 6th Street.

It sounds like it only happens a couple of times a week.

JT: Correct. For the most part, even when you come in on Saturday and Sunday you will still find tables with people swirling their beers and really appreciating them. Everything that we built here was based on the mission statement that it's all about the beer. Every decision! If it was a little more expensive, but made the beer better, that was what we were going to do.

You are working with a number of new brewers. Going into 2014, who are a couple that you think are going to make an impact on Texas this year?

JT: Unfortunately, we're not getting much of it, but Lone Pint from Magnolia is phenomenal. They had some consistency issues at first, but their beer is so good, when we have it on, it sells three to four times our average. It's a top seller. Everything they put out is just fantastic. Buffalo Bayou is doing some really tasty stuff. I think No Label is going be huge. We've spent time with their head brewer, and we're really excited about some of the beers they are doing. And locally, I have to mention Austin Beerworks and Hops & Grain.

You are also doing beer education and classes each month. Can you explain the premise and format?

JT: Tre Miner is our Assistant GM. He is a second level certified cicerone, which is much like a sommelier's job with wine. So the second Tuesday of every month, he does a custom flight and Via 313 provides the pizza. They go through five different beers with a theme. Occasionally, we'll have actual brewers come in and go through the flights with him as well. And he goes through everything: the aroma, what it looks like, what it tastes like, what it smells like, the subtle things you're looking for in a beer, and what makes it special. He's not trying to make people cicerones, he's trying to give a general appreciation for different styles and ingredients of craft beer.

Brandy: It brings more recognition to their palate: what they're smelling and tasting, how the beer changes with each sip, and why the progression goes in a certain order for your palate. So he tries to change the angle each time. He's having a lot of fun with it.

JT: That man has forgotten more about beer than I'll ever know about beer. And I know a lot! 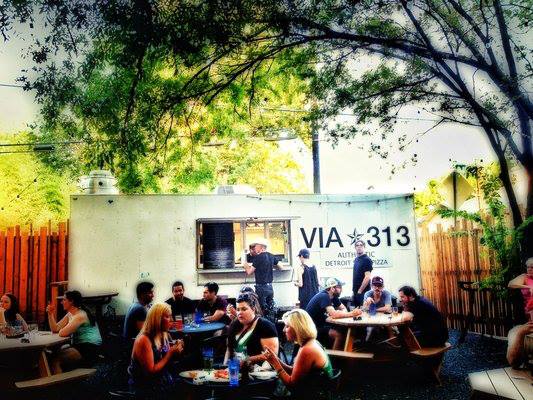 You mentioned Via 313 pizza. How did the decision to partner with them for the food service come about?

Brandy: We had a lot of food trucks courting us. Before I realized what they were doing, I just thought they had extra food and were just dropping it off to be nice to our staff! They were all trying to get in the back yard. We decided on Via 313 because they care very much about the quality and the craftsmanship of their pizza. Our mission statement is "it's all about the beer". It makes decision making very easy. So to hear them talk about their product, versus some other conversations, they seemed different. If we were in the pizza business, that's what we'd be saying. It was a good fit for quality and craftsmanship.

JT: Plus they brought us a shit ton of free pizza over and over again!

What's coming up for Craft Pride? What are your current plans for year two?

Brandy: We're not able to talk about much of it, but when we can, we'll be excited to share it. Come hell or high water, there are definitely some things we want to pursue soon. One big thing we can talk about is our anniversary party on February 28th. There are many beers that we're just so excited about.

JT: We're raiding our two-story walk-in cooler. We actually have a cellar here. Half of our second story walk-in a cellar. We were fortunate enough to get our hands on some oddities and rarities for that event. There a keg of Real Ale's Empire that was kegged February 28th, 2011. So it'll be three years old the day of our anniversary party. So we'll be doing that, along with 25 other super rare beers. We'll also have a year-old Deep Ellum Numb Comfort and Jester King's La Vie en Rose. It's going to be big.

Brandy: And in March, after South By, to bring out the good stuff for locals, we're going to have a pepper beer party. It may be called "Capsaicin and Cask." We're playing around with the name, but we're excited. Breweries are experimenting more with pepper flavors and heat. Sometimes you get a good blend of both. Sometimes it has a little more heat.

JT: There's a couple of beers that have been infused with ghost pepper. And a couple with habaneros.

Brandy: What led to this was No Label's Don Jalapeño. Whenever we had it on tap, the keg blows so fast. Sometimes we don't even get a pint for ourselves! And then we pout. But these beers are growing in popularity, and we're excited to showcases several at once.

JT: We'll have a cask on Don Jalapeño with mango and habanero for that event. They're calling it Don Habanero. Anything stupid, stupid hot I'm excited about. I'm a hop-head, but I'm also a pepper-head.