Porter Ale House aims to become the new neighborhood hot spot for the burgeoning section of South First below Oltorf. Owners Trevor Lane, Joe Bixel, and Neil Joiner bring a wide range of front and back of the house experience to the project. Porter will focus on pub food elevated by local ingredients and a wide selection of top-notch beers. Eater spoke with the team about serving a neighborhood, striking out on their own, and "badass brunch." 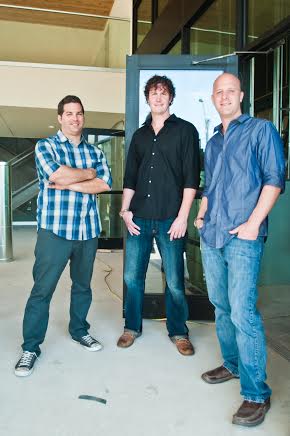 Bixel and Joiner have a long history of working in kitchens together, and they met Lane while all three worked at Hyatt Lost Pines. Bixel and Joiner were chefs at the resort, and Lane managed the hotel's numerous dining outlets, which included three main restaurants and a coffee shop. All three share a passion for beer and food, and they were impressed by Austin's restaurant scene. "Austin is a hot spot," Bixel says, "We didn't come here intending to open a place, but we had to make something happen."

Porter will feature thirty taps, and while local options will be featured, they're also going to bring in beers from around the world. The cocktail list will be what Joiner calls "approachable," and will feature house-made syrups and other ingredients. They will also make their own condiments and pasta. Bixel is especially enthusiastic about dishes like pierogies and spaghetti and meatballs since those are "rarely on menus in Austin."

Porter will serve dinner and lunch to start, and they hope to quickly expand to what they're calling a "badass brunch." Lane says his favorite brunch in Austin is at Maria's Taco Xpress, where "your girlfriend could have just broken up with you and you'd still have a blast." They hope to create a similar atmosphere, with lots of "death metal and gangsta rap" and playful cocktails.