Last weekend, the 3rd edition of the San Antonio Cocktail Conference brought a eager pack of bartenders, restaurant owners, and cocktail fans to the Sheraton Gunter Hotel and a variety of downtown-area venues including Hotel Havana and the Majestic Theatre. Eater takes you inside three fabulous, boozy days dedicated to all things cocktail. 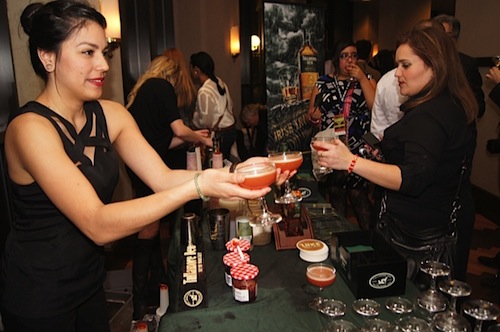 Friday's Texas spirits showcase was held at the Pearl complex, which also played host to Josh Ozersky's Meatopia back in November. The complex's "Pearl Stables" event space was crowded and bustling, as festgoers downed comfort foods like Boiler Room's grilled cheese with cauliflower soup and Jeff Balfour's pretzel tree with a dipping sauce cup. Balfour plans to open an as-yet-untitled brewery and restaurant in the Pearl brewhouse later this year. A massive afterparty featuring local spirits from distillery Ranger Creek was also held just steps away at Steve McHugh's Cured, which opened just under a month ago. The restaurant jettisoned their tables to accommodate the large crowds, but the space's clean lines, massive glass charcuterie locker, and oversized bar area drew praise from the guests.

On Saturday afternoon, SACC went into education mode: the conference held 16 individually ticketed seminars and classes covering everything from standards of bar service to a historic look at Cognac. Ed Hamilton of rum reference website Ministry Of Rum deconstructed the spirit in his session, showing the audience how water, caramel color, and viscosity change raw overproof spirits into the rum flavors and strengths employed in the home bar. In another afternoon workshop, Tad Carducci of Tippling Bros. led a blind tasting of six amari that ranged from bitter to sweet. Carducci consults for Averna, but wisely kept the shilling to a minimum and trusted his audience to follow his pithy and insightful facts and figures. At the event's afternoon trade show, spirit vendors handed out a copious quantity of neat spirits, cocktails, mixers, and business cards to the trade-heavy audience roaming the floor. 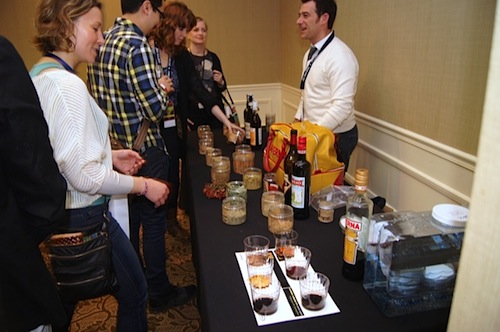 Saturday evening's main event was the "Stroll On Houston Street," a double party thrown at John Besh's Lüke and host restaurant Bohanan's, with extra libation and food stops between the two for good measure. Bohanan's event had a relaxed atmosphere, with guests socializing at moderate volume over drink highlights like the "Blood and Sand" (Glenfiddich 15, cherry brandy, sweet vermouth, and OJ), "Sands" (Bombay East, lemon, grapefruit juice, and maraschino), and "Rhum Clement King Agricol" (a rum punch w/ creole shrub, ginger beer, cherry heering, and lime juice.) While fest co-founder pressed the flesh and served shrimp cocktail and rare beef, the longest line of the evening was at Doug Horn's Dough calzone station. from The second party at Lüke was a more boisterous affair: a shucking duo handed out oysters as fast as they could work while a jazz band played at top volume. Whiskies from Templeton, High West, and Old Forester were the primary pours at the party, though those who searched found two bartenders making excellent classic daiquiris on the restaurant's back terrace.

Saturday's official afterparty was held at the historic Empire Theatre, and consisted mostly of '80s dress up, copious drinking, and first-rate covers from the popular Austin band The Spazmatics. There were over 15 cocktails available at the nightcap event alone, including several from Austin's Midnight Cowboy. This meant that surviving the evening required choosing cocktails wisely, setting aside half-full beverages, and regular hydration. The festival parked a complimentary cupcake truck just outside the theatre to help line the bellies of those staying through the late hours. 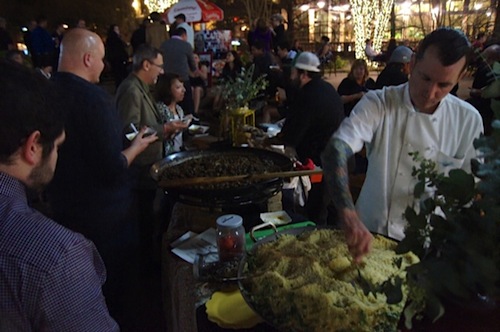 While final numbers have not been released, the festival gave every impression of being a repeat success - venues were full, miscues were rare, and the volunteer and bar staffs were unfailingly friendly. Conference organizers have announced via Twitter that the event intends to return to San Antonio in 2015.
· All Hangover Observations [EATX]