For the first time, the restaurant will now have its own identity within the hotel. The previously reported opening date is, not surprisingly, now tentative. According to Mechura, he expects the third week in September, dependent on construction and the city.

According to a press release sent over the weekend, the menu includes "familiar, timeless dishes with an updated twist," such as Cinnamon Smoked Duck, Pan Seared Gulf Grouper with Crispy Prosciutto and Thai Chicken Pasta.

Chatting on the phone from a parking garage near the restaurant, Mechura shared the inspiration for the new concept along with his hopes to create excellent combinations of flavors and an unpretentious atmosphere (oh, and "wonderful body heat").

What was the impetus for the rebranding and this new concept?
Well, I think it didn't have its own identity before as just the Mansion at Judge's Hill. All we had was a restaurant in the Mansion at Judge's Hill. One thing that the partners are very specific on as well as Steve Schotberger (General Manager) is that yes, it's a restaurant in a hotel, but we want it to be its own identity. Not only that, but we really want to draw in patrons outside of the hotel, guests independent of the hotel.

There's a wide range of cuisines and ethnic influences on the menu. What are some of your main inspirations as a chef?
My biggest influence as a chef comes from flavors. I just like flavors. I know that sounds sort of ambiguous. It's like?what? Of course. You cook.

At the same time, if I can get a better product that's not in Texas, I'll get it. It's about the best flavors and textures. From there, I really like Southeast Asia, the Mediterranean and France. Obviously I like the bounty that is the United States. Where ever that flavor comes from is wherever I will seek it.

I can't tell you how many times in my career I've had somebody put up one eyebrow or be like, "huh?" when they see a menu item or I describe it to them. I have to tell them just to taste it?just try it.

My "just try this dish" on the menu is the small plates' seared scallop with the little potato cake and char-grilled eggplant with caramelized onion honey. It's just a bunch of things together on the surface, but when you put all those flavors together it really works.

Really, it's just about flavors coming together. I like to combine salty and sweet, smoky and roasted, spicy and caramel-y. When I can put two or three together in one dish, then I'm happy.

What is your favorite dish on the menu?
Other than the small plates one I mentioned? Oddly enough, as simple as it is, the Pasta Amatriciana is another one I really like. It's a very rustic, crushed tomato sauce with olive oil, bacon, roasted garlic, caramelized onion and a little bit of chili flakes just to give it a little bit of heat.

You've been with the hotel officially since March, but what originally brought you to Austin?
I've been here a little over two years. I moved here for the position as the executive chef of Escondido Golf and Lake Club out in Horseshoe Bay. That was fantastic?as long as they were selling dirt and selling real estate. And when they stopped selling real estate and dirt, they could no longer pay a handful of us managers and directors, so out we all went.

Then the CEO of Texas Star Brands was buying a franchise of Bob's Steak & Chop House. I was originally thinking of going in a different direction, but he was thinking of bringing me on as a chef short term and then moving me on to the front of the house as a general manager at some point. So that's the direction I went last year, but ultimately the more I thought about it, the more I realized it was not a direction I wanted to go. When Steve reached out to me in January, it sounded very intriguing to me. It was more in my wheelhouse.

Have you learned anything about Austin in that time that has shaped or changed how the concept has evolved? When you were putting it together, how much is it what you see will be marketable to Austin and how much what you're just passionate about creating?
It's a split between the two, and I would even say it's probably 60/40. Sixty percent what I think the market will support because ultimately we're in business to stay in business. We have to put together a product that the partners and I feel comfortable about. We have to like to do it every day, but it has to be supported by the community and the hotel.

I believe that during my time here and seeing what's opening, what chefs are doing, what restaurants are busy, seeing what I like in 2013, I think we've put together a concept, restaurant, menu and atmosphere that really embodies Austin and really puts what Hotel Ella, the Hill Country and what Austin are all into perspective. From a business standpoint, still balancing with what our culinary interest are.

In a city like Austin, where we do see so many restaurants open and close in a year, what do you think stands out about Goodall's?
What do we believe will have us hold the test of time? We're going to evolve. I think we're going to build a wonderful neighborhood atmosphere that I'm confident will perfectly jive with hotel guests – make them feel like they're being taken care of in a four diamond hotel – and allow our neighbors and community to be able to come in and know that it's not a special occasion, once-a-year restaurant. But it's fun. You don't have to whisper or lower your voice when you walk in the door. There's a bar lounge to the right, a dining room to the left that's thought out – just like our food. It's thought out but not contrived or pretentious.

I really think that between the two rooms and the main level of the mansion, from a Goodall's standpoint, that we're going to create some wonderful body heat that will just become a warm place that will evolve with the city and with the direction that people want to eat in this town. And it will simultaneously become a mainstay, a comfortable place that will change enough to keep you interested but doesn't change who they are and their identity month to month and year to year.

Check out the latest progress on the restaurant and the new dinner menu: 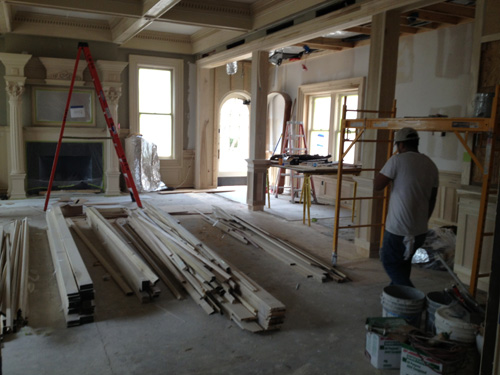