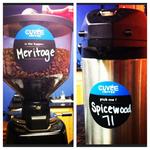 Austin-based Cuvee Coffee's Mike McKim has taken to the internet to tell indie baristas to be more like their Starbucks counterparts and, like, smile. A recent study found Starbucks baristas were more friendly than those at independent coffee houses, and McKim recounts his own negative experience at an unnamed Dallas coffee shop. Cuvee is working on their own brick and mortar store, and McKim vows the baristas will not be dicks. Let's hope Cuvee takes a cue from Starbucks and gives those baristas benefits, too. [Eaterwire]