For greasy spoons week, Eater Austin paid a visit to La Mexicana Bakery, the 24-hour panadería/taquería hybrid located in the heart of South Austin. Most nights, the restaurant is packed with hungry Austinites who have stumbled toward the building's red, green and white neon lights for greasy tacos and a sugary pastry to jolt their booze-soaked brains back to reality.

In the light of day, however, the restaurant transforms into a family-friendly place to have lunch or a midday snack on the cheap. These scenes, captured at noon and midnight, show both sides of the long-standing South Austin institution.

The ability to serve such a diverse clientele of families, hipsters, and Mexican-Americans alike has likely played a large factor in why La Mexicana has flourished in its 24 years. The bakery began as half of the once-successful Tex-Mex restaurant La Reyna, which closed last year after a steady decline and is now home to El Chile. Owner Jesus Becerra, who worked in the bakery department at HEB and then at La Reyna for years, bought the bakery part of the restaurant in 1989 and re-named it La Mexicana. Becerra's daughter, 22-year old Bianca, walks around the kitchen on this busy Thursday afternoon like it's her own.

"This place is like my second home," she remarks.

The smell of sugar wafts up from the bakery cases, which hold an absolutely dizzying array of authentic Mexican pastries (pan dulces) to choose from. There are no price tags displayed next to the trays, probably because they simply aren't necessary. You can stuff one of the white paper bags until it's about to burst for around five dollars, as the cost of the pastries range from 50 cents up to two dollars, with some offered for little as just 25 cents. 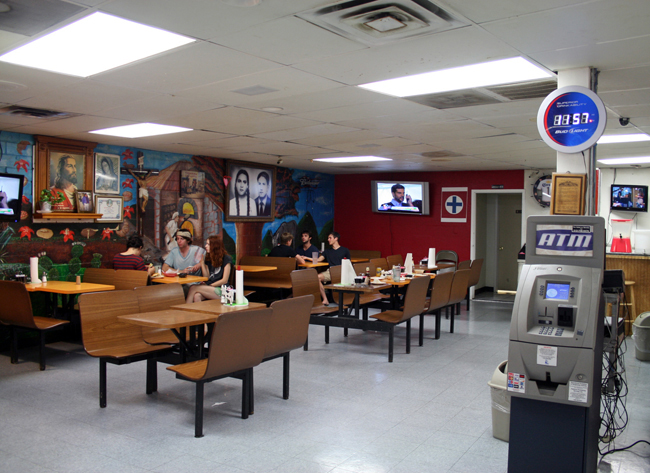 Becerra says the most popular selections are the conchas (sweet bread rounds topped with sugary pastel shell designs), empanadas (triangular pastries with sweet and savory fillings folded inside), and La Mexicana's famous tres leches cake slices. Whatever you do, be sure to grab one of the piña novias, a buttery pineapple-filled puff pastry with a crunchy drizzle of sugar on top, and don't shy away from the surprisingly delicious pumpkin empanadas (empanadas de calabaza.)

The kitchen serves breakfast and lunch menu items 24 hours a day, and according to Becerra, breakfast tacos are equally popular with the late night and early morning crowds. For lunch, patrons typically go for traditional plates (platillos Mexicanos), tacos, and tortas. Utopia, Texas residents Tim and Gerry Gebhard come to La Mexicana for the steak (bistec) and chicken (pollo) tacos with queso fresco and avocado every time they visit Austin. Like most of the people who love to eat here, they don't remember exactly when they first started coming, only that it has been several years since they first discovered this place.

"This is our secret place," Gerry says. "We don't want anyone to know about it!"

Unfortunately, it might be a bit too late for that. On the last season of No Reservations, Anthony Bourdain visited La Mexicana with Neon Indian frontman Alan Palomo after waxing poetic about Franklin Barbecue and shotgunning beers with Sleigh Bells. Yet despite receiving national exposure, the divey ambiance of the local favorite remains unchanged, especially during the wee hours of the night. The fluorescent lighting casts an almost eerie glow on the colorful murals and crucifixes that adorn the wall; from a black-and-white portrait, Becerra's grandfather and grandmother watch over the dining room.

In the back of the expansive kitchen, Tejano music blares from a stereo as two bakers feverishly mix, knead, and portion out dough. They'll work hard all through the night to prepare large orders of bollio and telera breads for area hotels, soft home-style tortillas, and hundreds of pastries to fill the cases up front. Every 24 hours, the cycle will repeat. As our city continues to expand and develop, let's hope that La Mexicana, full of rich history, tradition, and damn fine tacos, never sleeps.