Brent Broyles and Steve Ettle On A Year At The Workhorse

Share All sharing options for: Brent Broyles and Steve Ettle On A Year At The Workhorse

This is One Year In, in which Eater Austin interviews chefs and owners on the occasion of their restaurant's first anniversary. Today, we speak with Brent Broyles and Steve Ettle, the owners at Workhorse Bar. 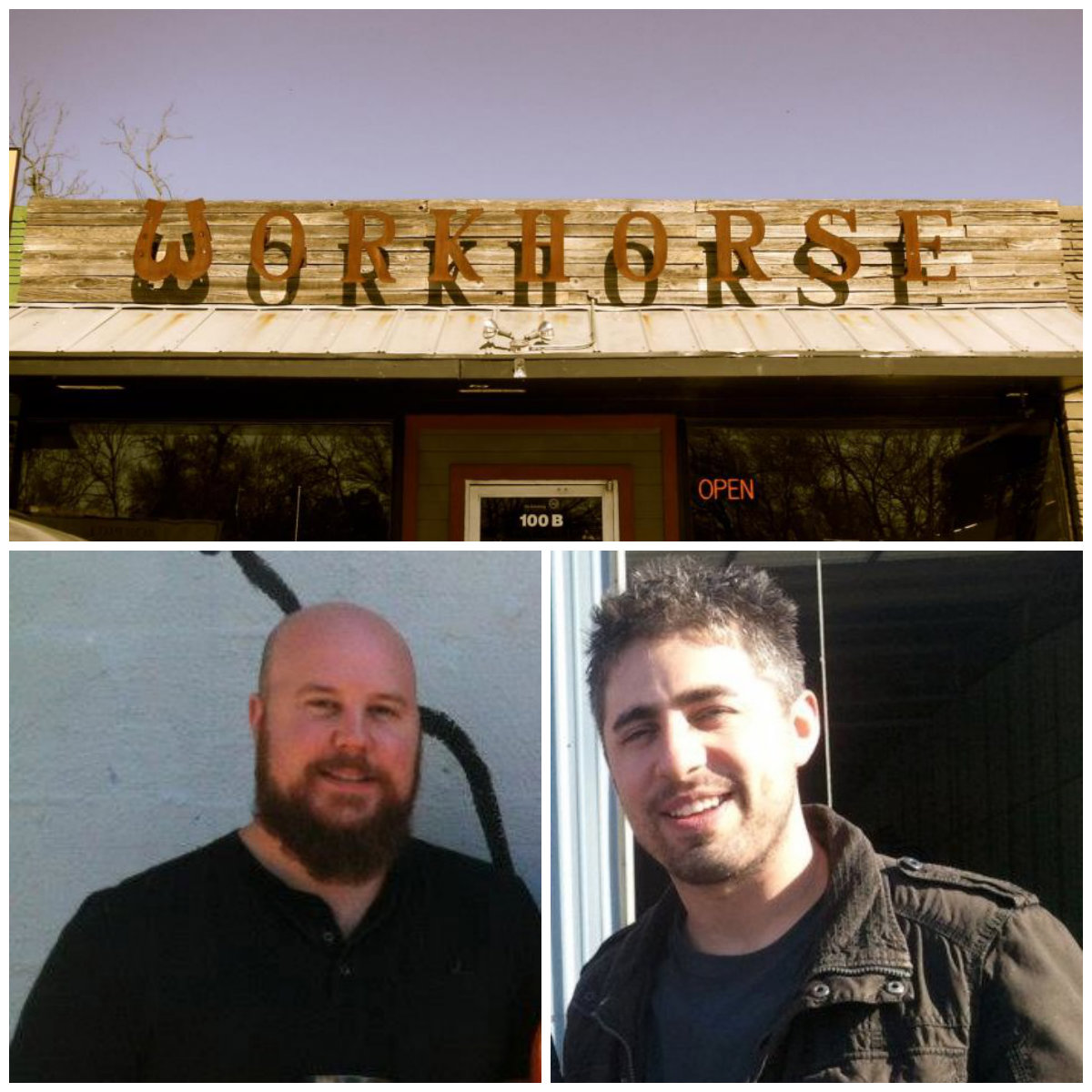 When beer-obsessed buddies Brent Broyles and Steve Ettle opened Workhorse Bar, they had no idea it would become the North Loop neighborhood staple it's evolved into over the last year. But locals have flocked to the Workhorse for the affordable craft beers (Live Oak's always $3), better-than-it-needs-to-be bar food (go for a burger), cozy outdoor patio and solid jukebox lineup.

For this edition of One Year In, Eater Austin sat down separately with Broyles and Ettle to talk about their first year in bar ownership. Read on to find out whether their answers matched up.

How would you describe your first year in bar ownership?

Brent Broyles: It's been fantastic. It's fun. Worth it, very much so. A lot of hard work, but I wouldn't change it for the world. I like the interactions, the people, the working toward something I believe in.

Steve Ettle: It's been great. Better than we thought it was going to be. What we had hoped was going to happen, which was the neighborhood supporting us and getting regulars, that exceeded our expectations. The only problems we experienced was the equipment not working, extreme heat, extreme cold, exposing what the building's limits are. But we've adjusted to that pretty well. Actually getting to take days off, which didn't think we were going to have. But it's been above and beyond what we thought it was going to be.

Broyles: No, no. Apprehensive? Only a little because of [Steve's] inexperience in the industry. But not really because I've seen him work two jobs, get little to no sleep, wake up and work just as hard. Just excelling and advancing in both of those jobs, so obviously not slacking in either one. I knew if he was able to do that, then he could work just fine in this industry.

Ettle: It's been good, great. I think during the challenging times, when the equipment was having problems or we didn't know what the hell we were doing on computer systems or dealing with an angry customer or whatever, but especially during repairs, it's nice to have someone to bounce ideas off of, to know someone's in the same boat with you. I couldn't have done it without him. I think we work better now than when we started.

Has anything particularly surprised you, or been unexpected?

Broyles: Not very much. I have quite a bit of experience in the industry. I expected to work hard, and I expected it to be a lot of hours.

Ettle: The initial interest in the business. People finding out about us before we even put a dime into advertising. Getting a write-up in Austin Monthly, you guys writing us up. Brent and I used to quiz ourselves during the first couple of months, like "Who's that regular? Name them!" We try to remember as many faces as we could. We try to figure out how many we know by name, a year in, and rattling off those people. That surprised me. Because you don't think about it when you're in the day-to-day operation. But you start naming them all off and it's been a really pleasant surprise.

How do you think the bar's been received?

Broyles: I think we're a great fit for the neighborhood. I think it's funny that people find more of what they want out of this bar than I ever expected them to. Like, we're called the Workhorse and we wanted to work hard and be blue collar, but we didn't intend for our chairs to look like sawhorses, or our bathroom stalls to look like horse stables. But those are things that people tell me, how awesome we did with making them look like horse stables and sawhorses. But they find more meaning in everything, and they find meaning where they want to find it. Which is perfect. It's simple enough that you can make what you want of it.

Menu-wise, how are your offerings different now than they were a year ago?

Broyles: There were quite a few beers that we thought were kind of staples in the craft market and we realized that seasonals are a little more popular. Even staples like Sierra Nevada Pale Ale is no longer on our wall, because we do the Sierra Nevada seasonal. That's happened with probably five beers across the board. Our food pretty much hasn't changed. We considered maybe bringing chili on the menu when it got cold, but there hasn't been too many requests for it. The salad's the only thing we added since we opened, and the salad's good.

What are you most popular items, and the best-received items?

Broyles: The Deep Ellum IPA, it's been around for two months and it hasn't slowed down. The burger's pretty much the most popular, mac 'n cheese and fries are also the most popular. White wings are a close second to the burger.

Ettle: We have really good prices on the Live Oak beers, so that's been the best seller, probably the best price in town. And the Lone Star, we have a good price on that. Food-wise? The burger, even though it's a little pricier than what a neighborhood bar is, it's really high quality meat, so it's been flying off the shelf.

Will anything change at Workhorse over the next year?

Broyles: I'd like to think that our beer will continue changing and evolving. I don't expect the menu to change much. I just hope that we are able to keep our respectable, knowledgeable staff. I think there will be some changes in the staff because all of our staff are motivated, smart people, probably we'll get some more motivated and smart people in here. I don't expect too many changes. Maybe just some improvements for the patio, to hopefully make it more year-round enjoyable. That's about the main foreseeable cost in our future. We don't want to install it until we have the funds to do it.

Ettle: Maybe. We could do some things to make our jobs easier. Brent and I are putting in a lot of hours right now, as we expected to. But we could make that easier in terms of staff shuffling. Small tweaks on the profit margin. We've toyed with the idea of a seasonal menu but I don't know if our place lends itself to that. It's almost a mindset of, "If it's not broken, why try to fix it?" If we see a request for one thing, we'll look at it.

We've thought about if we could expand or put feelers out there for a second location, that'd be exciting. But we've still got loans to pay off so that's probably not on the horizon for the next year. But I don't know what else we'd change, honestly. Our daytime business is the only thing we could improve on significantly, maybe running a burger and beer special. Change our signage up, because it's hard to see our sign in the daytime. Improving our daytime business is the only thing that I would change immediately.

If you had the bar to open again, would you change anything or address challenges differently?

Broyles: We had a couple staff members that were on the fence about joining us, and if we'd seen our future of having a better handle on things, we might have forgone having one extra staff member and trained our current staff with more responsibilities, and allowed Steve and I to step in as the role of bartender as well as manager, so we could share in the bartending role. But I can't think of too much else.

Ettle: There were things on the business plan that we didn't really account for, so all the taxes that hit you every which way were unpredictable. Some gambles we took on used equipment didn't pan out. Other than that, the staff's been above and beyond what we expected. And I know the customer base has been. I would just say some of the tax things we'd never dealt with before, I didn't realize how much of a chunk that takes out of your bottom line. Not that we can do anything different on that. [laughs] But the fact that we've been able to reel in such a loyal customer base right off the bat has helped to ease that burden.