Michael Sanders On A Crafty Year In North Loop

Share All sharing options for: Michael Sanders On A Crafty Year In North Loop

This is One Year In, in which Eater Austin interviews chefs and owners on the occasion of their restaurant's first anniversary. This week, we speak with Michael Sanders, owner of Drink.Well. 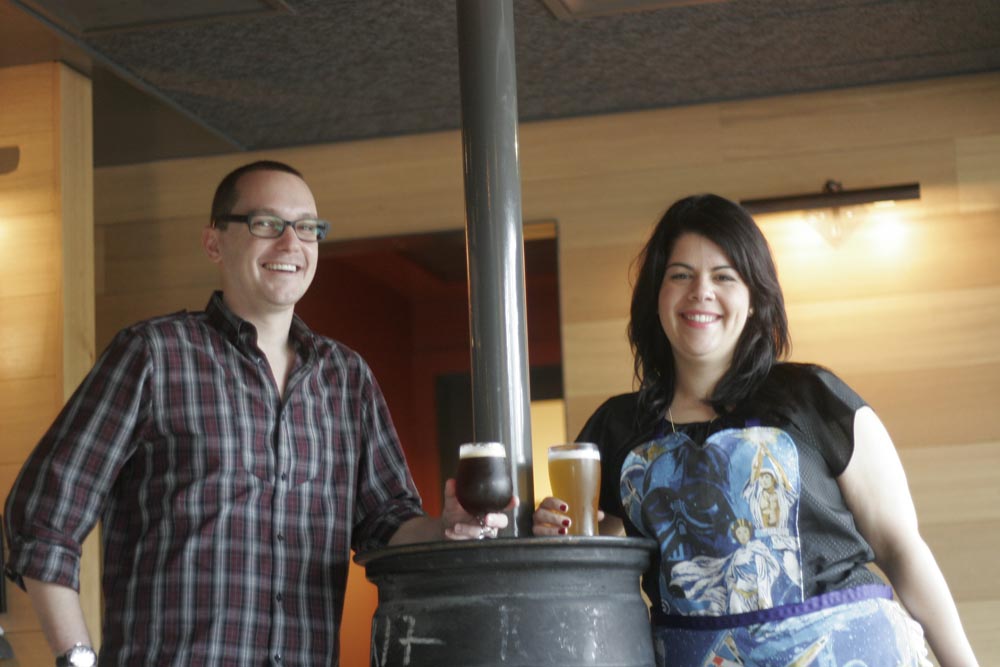 For Mike and Jessica Sanders, husband and wife team behind North Loop's small but mighty watering hole, Drink.Well, inspiration for original craft cocktails often comes not from the contents, but rather the moniker. Both Mike and Jessica come from the world of advertising, and thus have a knack for conjuring up fiendishly creative drink titles: examples include "Royale With Ease" and "Pisco Inferno."

"One of the things we're very proud of is that we feel like we have very interesting names for everything," says Mike Sanders. "Because we have a marketing background, Jessica and I usually end up coming up with our names first. We come up with names, we come up with concepts, we come up with ideas, and then we end up working back from that."

After relocating to Austin from NYC, the Sanders' opened Drink.Well in February 2012, and have made it a personal mission to bring the best of American booze and delicious teaser snacks to the ATX masses. Taking a break from concocting cocktails, Mike Sanders caught up with Eater to discuss the aggressiveness of absinthe, the brand new menu, and why he doesn't mind being called a hipster.

Why did you and Jessica decide to open a pub?

After I graduated school, I moved to New York. I was working up there in marketing and advertising, and I met Jessica there. Part of our business included entertaining people, so we would go out and explore interesting places. I was in sales, and one of the things that was really cool was that I had an expense account, so I could get in to places that I probably wouldn't be able to afford on my own. We just really, both of us, fell in love with the movement that was going on with craft cocktails. There was a lot of beer, a lot of American products that were coming out that were really interesting.

We had come down [to Austin] every year for ACL and South By, and had stayed with friends who live real close by to where the bar is now. We were exposed to the process that was happening in Austin, with cocktail restaurants that were opening and restaurants that were opening, and we knew we wanted to get in-volved in it. I had always loved Austin; I couldn't wait to come back, and I really wanted to bring Jessica here. It just ended up working out really well that we found a great spot and were able to live that dream.

What differentiates Drink.Well from the dozens of other pubs and bars that populate the cityscape?

One of the things we try to do as much as possible is to bring culture with beers and cocktails and food, and make these things a little more accessible to a wide range of people. We're in a neighborhood where we get a lot of regulars: people are bike riders and walkers, and they'll stop in for a drink. We do cocktails on a level, in my opinion, with the highest-end talent in the country, but we do it in a fun, laid-back atmosphere – in a neighborhood where a lot of people can drink, and it's a little more accessible than a lot of other places. We fit into the Austin landscape pretty well, but we're different in that we're able to provide service and products that are at a high level, but are also accessible to people.

You don't serve beverages from outside the U.S. Why did you want to keep the focus on domestic drinks?

We used to go to a place in New York that was a craft beer bar, and only served domestic beers. Obviously, there are a lot of great beers from Germany and Belgium, and the overseas market was really dominating for a while, but we're seeing a lot more smaller, craft beer breweries opening up across the country, so that's what sort of started the ball rolling. With that, we started looking at bourbon, and a lot of other liquors that are made within the U.S. We really saw a lot of American pride in making these products, so we wanted to tap into that as much as we could.

How do you feel that Drink.Well. uses absinthe in a unique way?

One of our bestselling cocktails – and, in my opinion, was a real game changer – is "Royale With Ease." We have an ounce and a half of absinthe in this cocktail, which a lot of people would probably think is pretty aggressive, but mixing that with other things creates for a really bold flavor. It really rounds out the flavors, and allows you to savor that cocktail, rather than having the sense that you're swallowing a licorice bomb.

Do you aim to attract a more sophisticated set of alcohol connoisseurs, or is Drink.Well the kind of place college kids could come to have a rowdy good time as well?

Well, hopefully no one would come in and have too rowdy of a good time, but we want everybody. We will never judge you for what you order: we will serve you vodka-soda without any problem. We have Bud Light on the menu. We have absolutely no problem with that. What we just want to be able to do is give people options for a wider array of beers, wines, and cocktails, that customers might not otherwise seek out on their own. We want to end up giving someone their new favorite drink. We've had people say that their favorite drink before was a gin and tonic, and then they've tried the "Royale With Ease," and they drink it every time they come in. So we're definitely for everyone. We hope that we attract sophisti-cated drinkers, but we don't just cater to them alone.

How did you go about selecting your team to help create the cocktails? Did you outline any "must-have" qualities?

One of the things we definitely wanted to do was make sure that we staffed the front of the house and the back of the house with people that had an emphasis on making [customers] happy. We wanted people that were making good prod-ucts and putting everything they had into making the drinks. When we ended up doing the new menu, we tried to make it as elaborate as possible. Jessica and I are heavily involved in creating the cocktails and naming the cocktails, but every-one in the staff, from the bar on back, has the opportunity to submit something for the menu that we would consider. Nobody necessarily has seniority over another in creating drinks. That way we can ensure that on the menu we only serve qual-ity stuff.

Can you describe your cocktail creation process? How do you decide what jibes with the current menu and what doesn't?

One of the things we're very proud of is that we feel like we have very interesting names for everything. I don't know if you had an opportunity to see the new menu, but we've incorporated a lot of different herbs and spices into a category we call "Pant(r)y Droppers." Because we have a marketing background, Jessica and I usually end up coming up with our names first. We come up with names, we come up with concepts, we come up with ideas, and then we end up working back from that. But then we also have always designed the menu in terms of overall flavor profile. We like flavors more so than ingredients. We come up with overall categories, find a funny way to name them, and then the process takes off from there.

Have you come up with any names recently that haven't made it to the menu yet? Anything clever?

Yeah, actually. One of the ones I wanted to put on but didn't make it to the new menu is a cocktail called the Presidente cocktail, that's made with white rum, dry vermouth, and grenadine. What I wanted to do was splash some black rum in there, and call it the "My Presidente is Black."

The ambiance at Drink.Well. is described on Yelp as being "trendy, hipster, and intimate." Do you agree with this assessment, and did you work to actively cultivate this type of atmosphere?

Here's the thing about the word "hipster": it's such a watered down word. I mean, you're writing for Eater; there's a lot of mentioning in there about "hipster this," and "hipster that." We want to make something that was visually interesting. We do a lot of fun cocktails and food; our atmosphere isn't stuffy. We're young, 30-something people, and we feel like we have a certain element of style, so if that ends up being called "hipster" by certain people, we'll go with it. We feel like Drink.Well. reflects our personality, and the personality of the people that hang out with us.

How do you see the menu continuing to evolve? What direction do you think you might take it in?

We just debuted the new menu yesterday, so asking me how the menu will continue to evolve from now is a pretty adventurous question. [Laughs]. This new menu, from my perspective, I think is the most adventurous and interesting thing we've done yet. The cocktails are obviously great, but we're also making a conscious effort to experiment more with food; to create more interesting options in that category.

In terms of the cocktails and everything, we try to keep it fun and interesting, but we don't have plans right now to do some drastic change to the bar. We're not going to turn it into a tapas place. We feel like we're on a nice little roll right now; on the first night of debuting our new menu, we got a lot of positive feedback, so it's been really great, and is probably enough change for now.

Where do you hope to be with Drink.Well. one year from now, after two years in business?

Well, hopefully by the end of next year Jessica and I can have a day off. One of the things that's been a bit unfortunate with the bar is that the space is so small. We don't really have the option to expand currently, but what we're hoping to do in the next year is that we can be a little more creative in moving around the seating, so that we can ac-commodate more people. Also, I think along with some of the other bars that share the neighborhood with us, like Workhorse, we're making that area a destination to be. Peo-ple have started thinking about it the same way they think about, say, Rainey Street, or West Sixth. North Loop is now the place to go to, and we're hoping, with all of us, that we can help develop that as much as possible.

The only thing I would add is that Jessica and I started this thing a year ago; we had no idea what it was going to be, that it would be this successful, and we're completely humbled. We're so happy that people like what we're doing. We appreciate all of our customers, our staff, our families, for all their support. We just want to drink well and have a great time.