Share All sharing options for: Meatopia TX in San Antonio Was Meaty, Meatastic

Editor markup for Meatopia Texas. This is only visible in the story editor.

Ever since James-Beard-Award winning food writer Josh Ozersky announced he was bringing his Meatopia festival to San Antonio the same weekend as the Texas Monthly BBQ Fest in Austin, there's been doubts about how many meat events central Texas can take. The answer? All the meat events. Texas Monthly's festival sold out within hours, and Ozersky's Meatopia was well-attended, well-organized, and delicious. As Ozersky told Eater a few weeks ago, "Meatopia is the ultimate meat festival and Texas is the ultimate meat state."

Meatopia featured chefs from all over the country, but Texas was by far the best represented, and seven Austin chefs brought serious meat. Couldn't make it down to San Antonio, or too busy eating your face off at the Texas Monthly BBQ Fest? Check out all the meaty goodness below. Culture Map Houston and Serious Eats have posted round-ups, too. 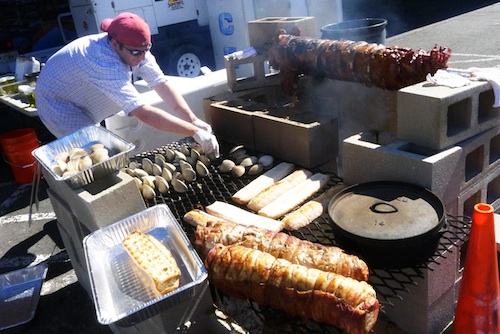 — The Pearl Brewery complex was a near-perfect host for the festival. The remodeled former brewery is home to some of San Antonio's hottest restaurants, but it also features ample plazas and outdoor space. In other words, there's all the pleasures of an outdoor festival without the dust and porta potties that can mar Austin events. Though the lines for the bathroom did appear fairly hefty.

— The festival had its shit together. Only a few chefs garnered lines of any significance, and the lines that did form moved fast. The Qui team was predictably one of those line generators, but they kept things moving at a swift clip. The biggest line appeared to be for LA-based Adam Perry Lang's monstrous smoker set-up, where he was serving up barbecue sandwiches. 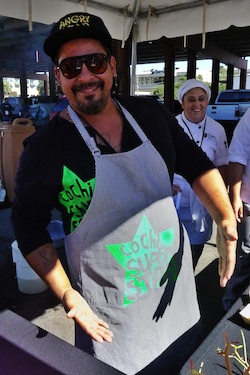 — Rene Ortiz was sporting a snazzy Cochi Superstar apron. When asked for more details about Cochi Superstar, he said it's a "puzzle" that will be "put together" over the coming year. Perhaps the unicorn and roller skate are clues. His grilled chicken with chili paste was one of the biggest hits of the festival.

— Josh Watkins of the Carillon went a different route than the grill-centric festival and served up olive-oil poached tenderloin.

— Foreign & Domestic's Ned Elliott served up lamb ribs, and was proudly presiding over his table. He called Meatopia "awesome" and did rounds at the end of the festival, handing out lamb ribs to other chefs.

— Laura Sawicki, also of mysterious puzzle Cochi Superstar, served up bacon fat brownies and bacon cookies in the V.I.P. area, as well as some delicious horchata. Her desserts went so fast that she spent the second half of the festival sampling the savory meaty goodness with her boyfriend, Elizabeth Street Cafe chef Mike Diaz.

— Paul Qui served up sizzling sisig, a Filipino speciality made from pork face. Early on in the festival, Deana Saukam, Qui's PR maven, offered the delicious smoky pork to the staff of One Lucky Duck, a New-York-based haute juice shop whose Pearl location was open during the festival. They turned her down at first, only to relent. But when Saukam offered to bring some inside, the employees insisted she leave the sisig outside on a table. "It's vegan in here." Saukam later received a juice featuring algae in exchange/as punishment. 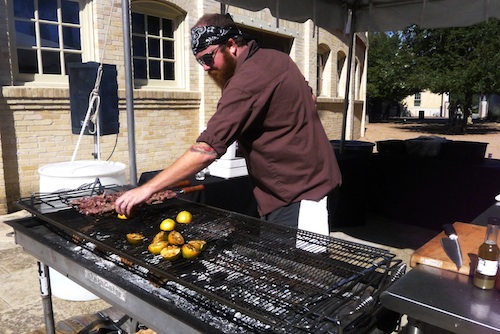 — Dai Due's Jesse Griffiths performed a cooking demonstration using dove he'd shot himself. Josh Ozersky originally wanted him to be out cooking in the regular area, but Griffiths would have had to source 500 doves to do so. He bagged 50 over "6-7" trips out to the field.

— In general, Austin chefs were a friendly bunch. Ben Runkle of Salt & Time, who was also serving in the VIP tent, visited every booth to offer samples of their charcuterie.

— Houston's Underbelly had a fairly epic grill setup made of stacked metal barrels. They were using it to cook up wild boar for Meatopia, but chef Chris Shephard said it is destined to become a "duck rocket" for making "the best Peking Duck ever."

— Another huge hit at the festival were chef Johnny Hernadez's cabrito tacos. Hernandez runs lauded SA restaurants La Gloria and The Fruteria, and the tacos were paired with an epic spread of salsas. 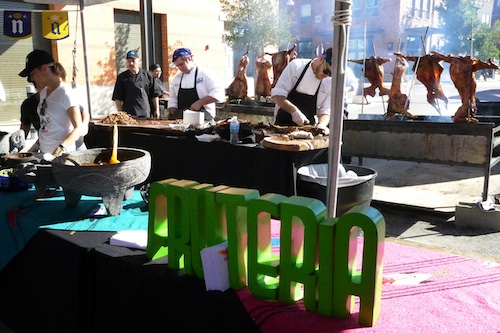 — Josh Ozersky, when asked what his final verdict on the festival is, said, "It was an unalloyed triumph, the best first year event I've ever done or attended. SA, Pearl, and Meatopia formed a special bond this weekend that I hope will last for many years to come."

Eater readers, did you go down to experience the meaty madness? What did you think?
· Scenes from Meatopia, Texas [Serious Eats]
· All-Star Chefs Give Meat Eaters A Lot to Gnaw On [CM Houston]
· All Meatopia Coverage [EATX]
· All Hangover Observations [EATX]