La Barbecue on the Move

Share All sharing options for: La Barbecue on the Move 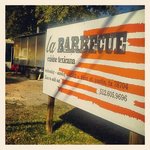 Blogger Full and Content spends a day with John Lewis, pitmaster of La Barbecue. She calls him "the MacGyver of Austin barbecue" and traces his evolution from one of Aaron Franklin's first employees to a pitmaster in his own right. The story also mentions that La Barbecue's lot has been sold, and they're potentially on the move to East 6th and Waller. Also on East 6th? John Mueller Meat Co., owned by La Barbecue's former pitmaster, John Mueller. [Full and Content]