One Year In with Ramen Tatsu-Ya

Share All sharing options for: One Year In with Ramen Tatsu-Ya

Austin is having a ramen moment, and North Austin's Ramen Tatsu-Ya is in no small part responsible. They've been named one of Bon Appetit's 50 Best New Restaurants and have won the hearts of minds of critics and civilians alike. Not just in Austin, either. Tatsu-Ya has regulars from Houston, Dallas, San Antonio, and Corpus Christi.

Eater spoke with the two pairs of siblings who are the brains, sweat, and brawn behind Austin's first brick and mortar ramen shop: Tatsu Aikawa, the chef/co-owner, Shion Aikawa, Director of Operations, Takuya "Tako" Matsumoto, the chef/co-owner, and Chiai Matsumoto, the digital media director and cashier. Like all successful teams, they have a habit of finishing each others' sentences as they compare ramen to alchemy, discuss starting from "fucking DIY" roots, and talk expansion to two, three, or even four locations. 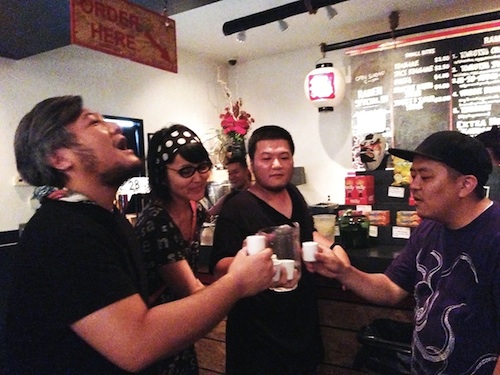 How did you all team up to start Tatsu-Ya?

So I wanted to open a ramen shop. I knew it was going to be a bitch, so I called Tako to see if he wanted to help. My brother got – you didn't get fired, you got laid off?

Tatsu: He quit, and then we're like okay, we need media help, so let's call Chiai.

Chiai: We're two families. I specifically wanted to do the social media stuff, and then it evolved into a bigger role.

Tako: I don't work with my sister much, which is probably better [laughter]

Shion: We have a mutual respect for each other, and we all have different specialties

Tako: We use each others' strengths. I like to compare it to great sports teams. Everyone knows their role and plays it well.

A year ago when you guys spoke with Eater, you described the state of the restaurant when you inherited it as like an episode of Kitchen Nightmares. How has the space progressed?

Tatsu: We were scrubbing pots in the kitchen for the first two weeks we were here.

Tatsu: But we literally scrubbed for two weeks.

So you inherited all the equipment?

Tatsu: Yeah, we bought everything. It was a crawfish-themed Vietnamese restaurant before this.

Chiai: They fixed iPhones too. We still get people coming in saying--

Tako: "Do you fix iPhones?"

Tako: We've made this place look very very good, but within a year, half the floor is gone already. We get a lot of traffic.

Most new restaurants are excited to make it a year. You guys have had an incredible year in terms of the enthusiasm.

Tatsu: I can't believe this has been a year. It feels like two weeks.

Tako: We do so many things ourselves, there's no time to remember or look back. If you're a cook, you just have to do your job. We all have to wear so many different hats.

What was your reaction to being named one of Bon Appetit's Top 50 New Restaurants?

Tatsu: In a fucking strip mall.

Tako: It's super honorable. I still can't believe it. I think it shows all the hard work that we put into it paid off.

You guys have talked in the past about ramen being an equation. How have you been tweaking that equation over the past year?

Tatsu: We taste everything every day. We're really particular on certain flavors. We talk about how the soup tasted today, we adjust if something's off. I think right now we're getting to the point where it's almost as close to what we'd like to get all the time. It's taken us a whole year to get it down.

Tako: We strive for quality. That's our number one thing. Even though our food is very affordable, we want that to be the highest quality possible. It's pretty hard to obtain that consistency.

Tatsu: Lots of restaurants strive to get good quality and consistency. But it's especially hard with ramen because it's so simple. It's so simple as a presentation, but the reality is backwards. The simple thing is hard to do.

Tako: It's an exact science.

Tatsu: It's more like being a brewmaster. Or alchemy.

You guys started out with a very limited menu, and you're slow expanding. What's the strategy behind the expansion?

Tatsu: It takes a long time to come up with a ramen dish because it has to be perfect. The original, the tonkatsu, it took awhile to come up with that recipe. We want to share the culture behind the whole ramen thing. Dinner is more southern style, and for lunch we wanted to offer the lighter Tokyo style.

Tatsu: We still need to add vegan for lunch. We want to get to a certain comfort zone where we can have fun ramen. Like a chili cheese dipping ramen. We're saving Monday for that.

Tako: We're trying to do a pop-up within our own restaurant. That's way down the line but it should be fun.

What do you make of the Austin ramen craze?

Tako: It's kind of a no-brainer, because it' s huge on the west coast, huge in Japan, it's huge on the east coast. But the big question was would it be too hot in Texas for people to enjoy ramen?

Shion: That was our worry: when summer hit, would our sales stagnate? But we're still hitting record amounts of bowls and record sales, too. I'm really happy that Austinites are so dedicated.

You guys have also mentioned in interviews that having a line feels authentic to the ramen experience. Do you always want to have a line?

Shion: We don't want people to wait, of course. But our space doesn't get any bigger.

Chiai: The turns are really fast.

Tako: You go to restaurant, you're going to wait for your server, then you're gonna get your drink, and get your food. At a regular restaurant you're still waiting. Here, the food comes out super fast.

Shion: I think the line made us a lot better in terms of operations. In the back of the house we looked at every second and tried to shave it off so we could get that turn for the people waiting in line.

Tako: A lot of it is just muscle memory. On the ramen line, each guy is responsible for certain toppings. So instead of everyone going crazy, we train chefs to do specific things. There's a lot of communication going on back in that kitchen. When someone is really timid, I'm like, "Hey speak up, it's crunch time, it's game time, let's go let's go."

What's been the biggest surprise of the past year?

Tako: To me, what's surprising is that we have regulars from San Antonio and Houston.

Tako: You work 60 hour weeks, more, I can't even count the hours. I'm like, oh man, why am I doing this to myself. And then I talk to someone from Houston who's really excited to drive here once or twice a week, and I'm like, "Thank you so much, I'll keep working hard."

Shion, you were named an Eater Young Gun earlier this year.

Tako: His head's gotten really big. He orders me around all the time. He's like, "Hey, you're talking to a Young Gun." Sometimes he pushes me – no, I'm just kidding.

Shion: I go out to bars, demand all the drinks.

Tatsu: "Hey, I'm the Young Gun, give me a fucking drink over here!"

You can go mad with power being a Young Gun.

Shion: It's kind of like a Spiderman thing. Something about talent and great responsibility.

Knowing what you all know now, would you do it all over again?

Is there anything you would do differently?

Tatsu: We'd get a bigger space. I want my customer to be comfortable and having as great time as possible. With this space we got, we're trying to do the best as we can. The next space might be a little bit different.

Tatsu: Everything was down and dirty bootstrapping, fucking DIY, fucking get shit done. Then we were like, finally, we can afford a pasta cooker and all that shit.

Tako: Even if it's 150 degrees in the kitchen, we're going to get it done. And then, it's paid of because now we have the equipment that we really need.

Tatsu: Get your AC fixed in the winter.

Chiai, could you talk a bit about social media and how that's impacting your business?

Chiai: With a lot of our regulars, I'm able to connect both here and on social media. I recognize a lot of our commenters. I think it keeps people more engaged, and it keeps it very relevant.

Shion: We do our best to reply back personally to everyone. We have to be active on social media because we don't have a phone.

Tako: There's no time to answer the phone.

What's next for you guys? What's will things look like a year from now?

Tatsu: Another location. Feed more people. Share our ramen with more people. We want to create a restaurant where everybody that works here is having a great time, and never steer away form the integrity of the products. But as far as business goes, we'd love another location or two. Or three or four.

So what's the Tatsu-Ya philosophy?

Tatsu: We try to keep it simple. No reservations, no take-out. I don't want you to eat my ramen when it's not hot and has soggy fucking noodles. I'm a fucking soup nazi. I want you to eat it at the perfect time.
· All Ramen Tatsu-Ya Coverage [EATX]
· All One Year In Interviews [EATX]