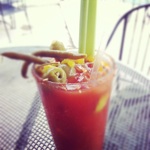 Attention, Austin's three-martini lunchers: you're all a buncha drunks. It's science! Ish. Okay, no, it's a listicle from the Daily Beast, which has determined that Austin is the fifth drunkest city in the country. Stats: 18.4 percent of us are binge drinkers, five percent are "heavy drinkers," and the average number of alcoholic drinks consumed per month by adults is 14.6. Seem a little low? You're probably in the five percent. [Daily Beast]