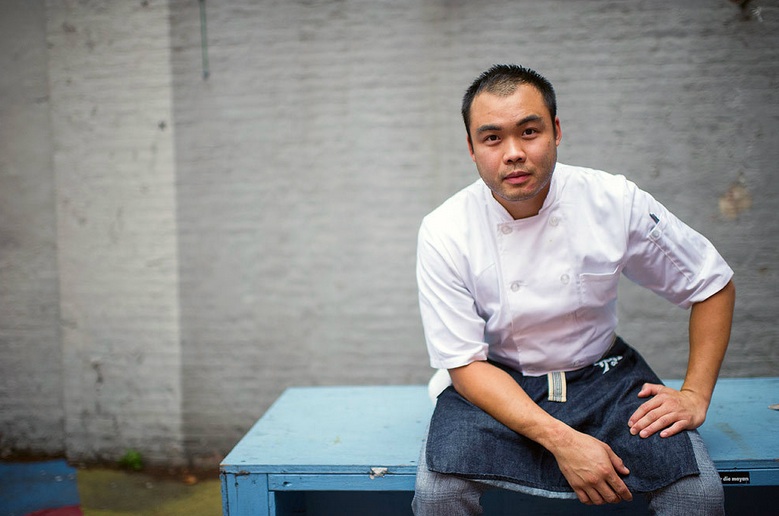 Paul Qui, Austin's very own Top Chef, speaks to the Eater mothership this morning, outlining his plans for Austin gastronomical domination: two East Side King brick-and-mortars, a flagship restaurant and a brand new East Side King truck and menu at the Grackle.

Qui says he's staying in Austin because of all the culinary potential here: "I just love it. I don't want to say that I want to make it better, but I just think there's a lot of potential." Sure, he says, he could have opened a big restaurant and relaxed instead of spreading himself across so many new projects, "But right now, I'm going to keep on rolling the dice. I can't sit still, man."

Since his Top Chef win, Qui's been traveling the world, eating inspiring dishes at Dinner in London, Noma in Copenhagen, and in Tokyo at RyuGin and Jiro Ono's Sukiyabashi Jiro. Qui's flagship restaurant was originally slated to open in November, but now he says he's got too many new ideas to be sure he can pull it off in time and make the changes he has in mind.

"I think I'm going to figure it out as I go along and as we build," Qui tells Eater of the flagship menu. "I guess I'm a bit ADD." He says there'll be a 50-seat, no-reservations dining room ("probably 12-14 items, more family-oriented, with whatever I can get in Texas") and a smaller 12-seat tasting room:

I'm going to have a 12-seat bar where guests can see the action and have the first bites of tasting menu experience. It's going to be sushi bar-style, but not a sushi bar. Then I'll move the guests to my library, where I come up with all the ideas with my team, and finish off the dinner there.

While he develops that concept, he'll be moving into his East Side King brick-and-mortar at 2310 South Lamar, opening in six to eight months, and taking over the kitchen at the Hole In The Wall on the Drag—the bar's management tells Eater Austin that'll happen as soon as September 1st. That location will serve the East Side King at the Liberty menu.

At the Grackle, Qui's new, full-kitchen trailer will serve "Japanese street food that isn't that popular," like "champon noodles, katsu-sans, and yaki udon."

He says he'll continue to consult at Uchiko and put in face time in the kitchen and dining room, at least until his flagship spot is closer to completion.

Eater National has the rest of the dish on Qui's tri-restaurant plans, "going for that perfect bite" and needing "to go out there and do [his] own thing."

Hole In The Wall