Welcome to The Gatekeepers, in which Eater Austin roams the city meeting the fine ladies and gentlemen who stand between you and some of your favorite hard-to-get tables. This week: Rob Pate at Péché. 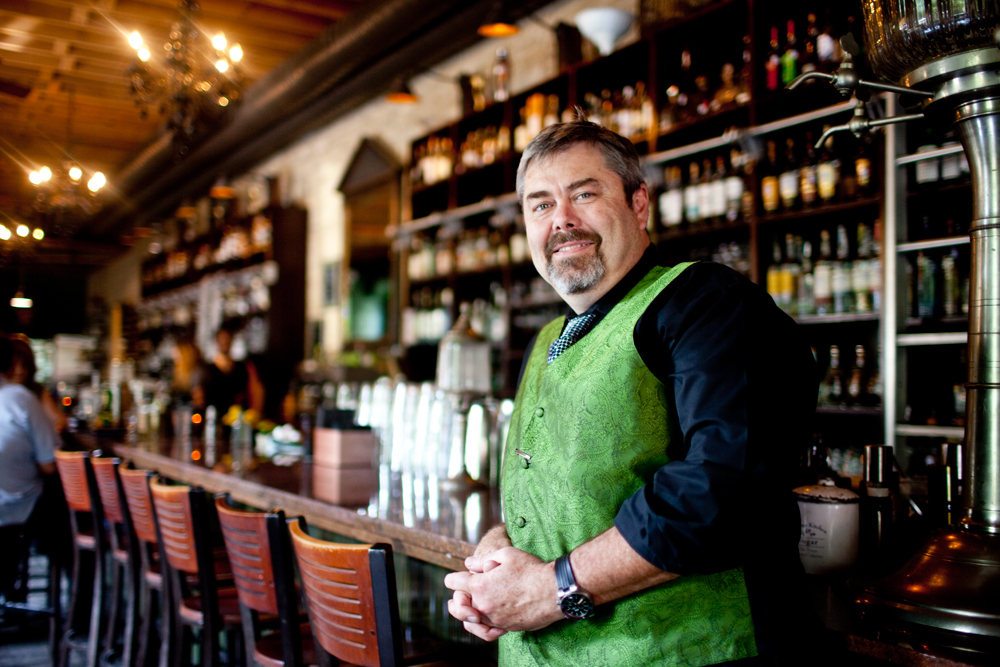 Is there a soul in Austin as well-versed in spirits as Rob Pate? Just don’t call him a “mixologist.” As the owner, founder, and general manager of Peché, the Warehouse District’s go-to locale for cocktails and company, Pate takes a firm stance when it comes to the inherent differences between mixology and bartending. Coupled with a fondness for absinthe and classic European-style cookery, this makes Peché a must-drink locale for anyone looking to be shattered out of a vodka-Red Bull routine.

Catching up on the north side of town, where we sought out a more traditional cocktail – her name is ‘Rita – Pate chatted with Eater Austin about the history of bartending, how absinthe can save a man from dysentery, and the right way to make the perfect cocktail.

Tell us a bit about your background in the food industry? How did you find food management as a career?

I went to college to become a dentist, and after the second semester of realizing that I liked to drink more than I liked to study, I figured that I better get a degree, and I just wasn’t going to have the grade point average to get into dental school. At about the third semester I actually cut my parents off, because I went home and they griped about the grades. So I said, “hey, I like being home, but I don’t like the griping, so I’ll just play it my way.” And they went, “ok, great. But if you need any help, listen, we’re sure to help.”

I ended up working in the catering department in at the Erwin Center. I later went and managed a food program at a country club called Prairie Creek, and that’s what gave me a taste of the restaurant business. Well, the bar and restaurant business, actually.

Did you end up getting a degree in food management?

I have a degree in biology.

How did you become interested in the Prohibition Era? Why is it a good theme to explore in restaurant management?

I’ve always been interested in the profession of bartending. Today, we hear the word “mixologist” thrown around left and right – it’s not necessarily one of my favorite words. I understand why people use it; I understand why I shouldn’t get upset when people use it – and I try not to – but I think the craft of bartending is what people should focus on, first and foremost.

One of my rules at Péché is that when I hire somebody, I don’t hire a mixologist. If you want to be a mixologist, there are plenty of other places for work. You wanna be a bartender? Then come work for me. The bartender bonds with people, he laughs with people. He makes people feel at home. He might say “well, you don’t really want a vodka-Red Bull. First of all, we don’t have Red Bull here. We’ve got a bottle of vodka here, though, so let’s try something else.” I owned Cedar Street for almost 16 years, and for 14 of those years, nobody had a better vodka selection than Cedar Street: we had every vodka you could ever think of, every flavor you could ever think of. I drank a lot of vodka back then, and went to a lot of great bars.

Did you just have it on the rocks?

So anyway, the Prohibition Era. Besides the obvious innovations surrounding alcohol’s legality, what makes it so fascinating to you?

They had no bartenders in Europe?

They had people who tended bar, but they didn’t really have bartenders. They didn’t really have the craft of the people who knew about the products that they were putting together, and how to make that wonderful cocktail. The word “cocktail” is an American invention. There are several journals you can read from European statesmen who would come over to the states and opine about how barbaric everything was, and that they only good thing you could get was a cocktail.

There were a lot of really wonderful bartenders who mentored other bartenders and passed that knowledge on, so during Prohibition, a lot of those great bartenders ended up on boats. They ended up in Europe, and consequently through the years Europe has had a lot of great bartenders. A lot of great guys who work behind the bar, who are happy behind the bar – both they and their clientele – have that intrinsic knowledge of how to make a perfect, well-balanced cocktail.

It almost seems like there’s a cyclical relationship between us and Europe. I’m including Péché in this, since you list several European comfort foods as menu items.

Ask any Frenchman and he’ll tell you they invented food. Among other things. [Laughs]. I’ve always loved the French style of food, and how passionate they are about their cooking. So when we did the restaurant, it was a no-brainer that we’d do a French influenced fare.

That’s interesting, because your chef Jason Dodge’s background is in Italian cooking.

But like the French would say, they invented Italian cooking. Jason is actually an interesting breed. He started out cooking in a soup kitchen, he didn’t know what he wanted to do in his life, fell in love with the passion of the guy who owned the soup kitchen, liked his philosophies a lot, and decided that’s what he really wanted to do. He got his degree in culinary arts, worked at the Four Seasons. He knows food, just like any great bartender [knows drinks]. He knows where things come from and how they’re made. That’s where the whole mixology and bartender [roles] sort of cross-mingle. A “mixologist” usually refers to a guy who knows what he’s doing spirit-wise, as far as balance and ingredients, but a “bartender” is someone who knows what makes the customer happy.

Why absinthe? How does it enhance a drinking or dining experience in ways that no other cocktail does?

If you ever read through some old recipe books, you’ll see a lot of absinthe used in cocktails. Most of the time it’s not used as a base, it’s used as a modifier. You get a nice sweet taste, and then it goes away. You don’t get that corn syrup ugly aftertaste that sweet drinks sometimes have.

I’ve actually never tried absinthe before. What are some of the biggest misconceptions about it, and what should first timers, like me, know before taking the plunge?

You’ve gotta like licorice. Licorice is the predominate flavor of absinthe.

Does it really make you hallucinate?

If you drink enough of it, yes. It’s the alcohol content that’s going to make you hallucinate.

If you drink two drinks, and you do it over the course of an hour, so a drink every 30 minutes, you’re going to have a good buzz about you. Each drink is worth probably about a drink and a half or a drink in three quarters in terms of alcohol content. But you’re not going to taste much alcohol: you’re going to taste a nice little licorice flavor, that’s going to be fortified a little bit with the wormwood.

Back in the day, if you were drinking in Europe in the 1800s, you had more than two. You’d probably have six or seven absinthes over the course of three or four hours. You didn’t drink water; if you drank the water in the town, dysentery killed you.

Let’s get into the history of Péché itself a little bit. Was it something that rose out of the ashes of your owning Cedar Street?

My business partner down at Cedar Street was also a partner up at another establishment that was where Péché is now. It became popular and needed a bigger spot. I had a vision for what I wanted to do, and this was the opportunity.

A lot of people see this as a glamour business, and there is a lot of glamour to it, but you’ve gotta realize that it’s a business first and foremost. It’s fun to own your own bar until you have to pay your friends to come in and drink. In order to avoid that, it’s important that a place feels great. It’s important that the atmosphere is done right. It’s also important that you don’t spend a million dollars to do that. We went in and we redid Péché, and we spent about $180,000 to do it, which in today’s market is nothing. So our initial cost wasn’t much at all. I used to think that I knew everything better than everyone else, but it took me six months to figure out that I didn’t. But we figured it all out over that six months, and we had enough working capital – we weren’t really losing money but we weren’t really making money – but we figured out what we had to do to make the place successful.

Aside from the presence of absinthe on the menu, what makes Péché the most “unique cocktail experience in Austin,” as your website proudly boasts?

What does Péché mean?

Péché means “sin.” And after a couple of cocktails, you’ll understand.

Why do you think Austin in specific is a good place for a European-styled restaurant? Is there something about the city that is receptive to those influences?

Can you give me an example of a European-style comfort food? Do any of your dishes ever get infused with Southwestern flavor or Texas-type cooking?

Collared greens are a huge French-style dish, so when you take bacon and flavor greens with it, that’s more French than anything I can think of. Duck fat in a gravy is certainly up there. Sweet breads, I love sweet breads. I don’t think there’s a plain organ meat out there.

Do you set out to inject a little originality in all your dishes?

Everything’s going to have a little creative flavor to it. But sometimes we’ll find an old recipe and just go man, let’s do it. We even did a Julia Child recipe recently, and it was perfection.

That’s pretty much ground zero for the modern American take on French cooking right there.

She was the home cook.

Did you make any mistakes when you were first starting out? What did you learn from them?

I make mistakes everyday. The secret is to figure out what those mistakes are and make sure you don’t do them again. If you don’t learn every day, you forget every day.

What does the future hold? Do you see Péché continuing to grow or evolve in any specific way?

But as for Péché itself, hopefully it’s going to be there for a very long time. We keep evolving with the neighborhood and the neighborhood keeps evolving with us. We keep that family together. One of the things that I’m big on is that when you come in and sit down at the bar, you’re no longer a customer: you’re family. We want you to become part of our philosophy, part of our family.

What’s one thing you didn’t know about going into this business that you wish you had?

Hours. And with that said, in this business, you’ve got to love what you do, or the hours will kill you. And I don’t mind it. That’s the great thing about it. I tell this to people all the time: I probably work 10 days a year, meaning that there are probably 10 days out of the year that I don’t want to go in that place. All the rest of the days, I go man, this is perfect.