Austin's lauded mobile pizza oven, Bola Pizza, appears to officially be going brick-and-mortar after a year of rumormongering to that effect. The Austin Business Journal reports today that Bola, which has thus far served at private events and farmers' markets, has leased 3,810 square feet of kitchen space at 7950 Anderson Square near the new North Austin Trailer Yard.

No word yet on whether the kitchen will also serve as a storefront--but they also have all those frozen pizzas to make, too. And a 375 square foot freezer is a mighty big freezer. 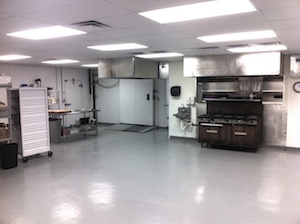 UPDATE: Eater Austin just talked to Bola owner Christian Bowers, who says that the Anderson Square kitchen was "leased specifically to turn up the volume on our frozen pizza product," so they can better serve distributors. Bowers also hopes to recruit fellow artisan food-makers to work alongside Bola in the huge kitchen space, saying, "I'm just trying to share the energy."

But if it's fresh made Bola-style pizza you want from a brick-and-mortar, look westward toward Dripping Springs. Eater reported on the pizza joint going into a farmhouse adjacent to the Jester King brewery back in April, and Bowers says he's actually been consulting with the Stanley's Farmhouse Pizza folks. When it opens, patrons will be able to get "something extremely close to Bola Pizza," says Bowers, made in Bola-approved ovens. "I'm going to show them my core philosophies on pizza and help them develop their menu."