Share All sharing options for: East Side King's Moto Utsonomiya: Trucking Is Hard

Welcome to The Gatekeepers, in which Eater Austin roams the city meeting the fine ladies and gentlemen who stand between you and some of your favorite hard-to-get tables. This week: Motoyasu "Moto" Utsunomiya of East Side King. 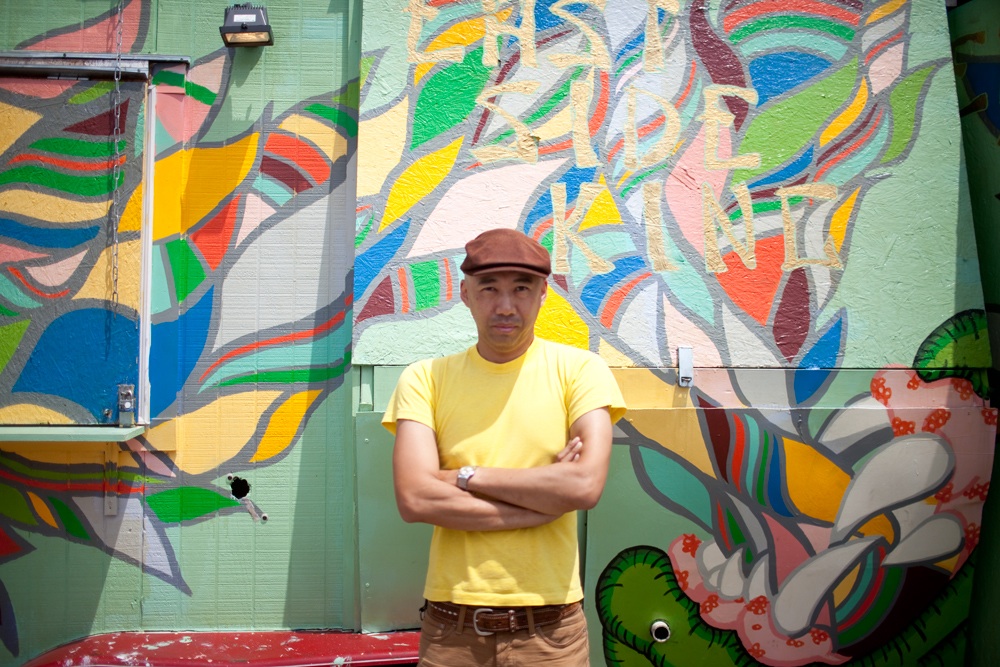 Austin's best-known food truck, East Side King, is owned by its best-known chef, Paul Qui. But a three-location truck serving Asian-style street food cannot live on Paul Qui alone: partner Motoyasu "Moto" Utsunomiya, also an Uchi veteran, is the man behind the day-to-day operations at the trucks, which are stationed at East Side bars The Liberty, The Grackle and Shangri-La.

Eater Austin visited Moto at the truck's slightly quieter Grackle location to find out how Austin's most popular trio of food trucks handles hundreds of drunk patrons and the ever-growing demand for more! Paul! Qui!

So you and Paul Qui own East Side King--how long have you known Paul?

A little over four years. We met working at Uchi.

A lot's happened in that time, specifically Paul's meteoric rise in popularity. Is East Side King busier than ever?

Oh yeah, of course, of course. The first big hit came after the Anthony Bourdain show, of course. That’s the biggest change for us. I was just working, just by myself or my girlfriend or with Paul. Now, after that, we couldn’t handle it by ourselves. And Paul got so busy at Uchiko and Uchi; I think they were opening Uchiko about that same time [as the Bourdain episode]. I was still working at Uchi. But we had a lot of people.

So it was just one or two people at the truck?

What's your busiest truck, of the three?

How many people do you see on your busiest nights--Friday, Saturday?

Probably, I would say, two hundred customers? But at Shangri-La, it was slow and it’s still kind of slow. But since Paul Qui changed the menu a couple of weeks ago, we’re doing good. I like that menu, too. The menu, and Paul Qui being there. People want to see Paul. He doesn’t really do the cooking, you know, but sometimes, he shows up. We all work. We all have to do something, not like a restaurant.

We still get the complaints, of course. That’s the main subject I have to concentrate on. The customer side. How can we serve them quick? We just get more, hard-working people. And it actually works good, though, being at the bar. Because people get their drink and chill, you know? People want to come out and drink and eat. It’s not just come to eat. So it works.

Does anyone try to cut in line?

No, but we get a lot of drunk people. After twelve. The cussing to our employees and all that, yeah. [Imitating a drunk patron.] “HEY CAN I HAVE SOME TACOS?” No, we don’t have them. “HOW ABOUT THIS?” [Moto flips up his middle finger in faux-anger.] And I have to tell my employees, you know, just let them go. Don’t talk back or anything, just let them go. You can’t do anything to drunk people, you know. I mean, it's not everybody. It’s rare.

You're a sushi chef by training--how do you balance that with the managerial side of things?

The manager side, I’m still learning. My specialty is sushi. I’ve been doing sushi the last seventeen, eighteen years. I’m not a chef like Paul Qui. My band is East Side King, that’s why I named the business East Side King. But now the East Side King business is more popular than our band. But whatever, you know. We’re doing okay. They’re old, and they don’t want to play out too much. And I can’t play out too much either since I’m busy, so it works out.

What's the difference between working at East Side King and working at Uchi?

So managing a truck is harder than working at a four-star restaurant?

I don’t know how other people survive it! Really! I’m really lucky. Paul Qui is learning how to manage a business, too, because he worked only for Uchi and Uchiko. But I mean, he’s smart. I’m lucky. I’m lucky in the band and I’m lucky in this.

I bet everyone wants to work for you now, right?

Yeah! Every time we post an ad on Craigslist, we get thirty to seventy people the next day wanting to come in. We only need two people! And we have to go through all this. It’s great. We want to open a restaurant. And Paul is opening his own restaurant soon around the same time.

Where will the East Side King restaurant be?

Maybe south? Not this area. A little farther. We have a lot of options. We’re still looking.