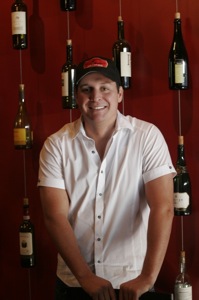 When he was badly behaved as a child, Tony Ciola's dad took him to the Olive Garden. As a punishment. Today, the 27-year-old Lakeway resident is the owner of Tony C's Coal-Fired Pizza in Bee Cave, but he still remembers the shame of When you're here, you're ... in trouble, young man.

Ciola comes from a restaurant family--he co-owns The League Kitchen & Tavern, and his clan was behind the now-shuttered Ciola's in Lakeway, which itself was an homage to their 60-year-old family-owned Ciola's in Virginia Beach--but Tony C's is his first foray into pizza. After a three-day whirlwind tour of New York City pizza joints that culminated in a visit to Lombardi's, Ciola says the decision was clear: when he opened his own place, coal-fired pizza was the way to go.

"These ovens burn at almost 800 degrees at the dome," says Ciola. Pizzas cook in about four minutes, producing a cracker-thin, crispy crust. "It makes for really nicely cooked, carmelized toppings, and you’ll see the sugar on the bottom gets so hot it makes little black spots." That, says Ciola, "is New York-style pizza."

True coal-fired pizzas have classically been some of the hardest to find in Austin, which is why Ciola calls his the "original" coal-fired joint, even though he only opened his restaurant in February 2009. Tony C's, says Ciola, combines old-school Italian pizza with a new-school take on dining in an airy, sleek corner spot at the suburban-friendly Hill Country Galleria: "I was pushing for a little more modern, more lively take, more music. Different than a crooning Italian restaurant. I thought that was a little dated."