Share All sharing options for: Mourad Belkacem of Draft Pick

This is One Year In, in which Eater Austin interviews chefs and owners on the occasion of their restaurant's first anniversary. This week, we speak with Mourad Belkacem, the owner of Draft Pick. 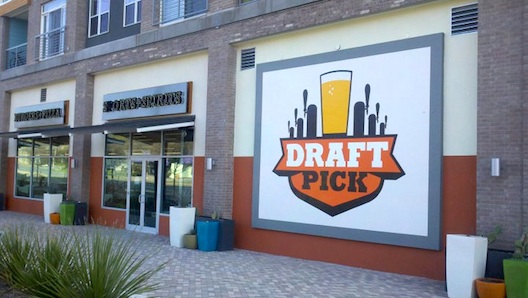 We sat down with Belkacem to talk about Draft Pick’s success, including its rotating beer selection from 32 Texas breweries and his plan for live entertainment and a revamped menu (how could it get any better than burnt orange wings?).

When you first broke ground on the new establishment a year ago, what did you envision for the restaurant’s identity? How closely has Draft Pick stuck with that?
We wanted to open something more upscale after seeing the success of our Texican Sports Cantina and the boom of East Riverside. We envisioned a fancier sports bar with the most Texas brews on tap, and great food. Now we’re focused on revamping our menu to focus on which will include more interesting items than typical “bar food.”
Tell me a bit about your background? How has your past experience played a part in Draft Pick’s development?
I first opened Texican Café in 1988. That was my start in Austin dining and it turned out to be very successful. We opened two more Texican restaurants, one being the Sports Cantina – the only Tex-Mex sports bar and restaurant in Austin. We also opened Café 1626 in South Austin which is more family focused, but still has plenty of televisions to keep parents interested with sports and news. With these successes, I wanted to cater to the crowd between those two groups– Draft Pick is geared toward those younger professionals.
What individual role does Draft Pick fulfill in the Baldirama Restaurant Group family? Why did you think it would make a good addition to the fold?
Draft Pick has the only bar in Austin serving 32 local breweries. This definitely sets us apart from other restaurants and bars. We are also one of the first establishments a part of the E. Riverside renovations. We’re located in the AMLI South Shore complex which provides customers with free covered parking 24/7. It makes a nice addition to the Baldirama family because it’s hip and new, and shows how versatile we are with restaurants.
How has your cuisine grown and changed over the course of a year?
We’re actually revamping our menu right now. This first year was really a growing period for us and we now have a better idea of what we want Draft Pick to be remembered for. We can’t tell you much right now, but you can rest assured knowing we’ll be featuring some great new additions, as well as keeping some old favorites. We've added gourmet burgers to the menu, and our lasagna has always been a big hit.
Is there a particular quality to Draft Pick that makes it decidedly Austin, or do you think you’d be able to find a home anywhere?
It’s the loyalty we have with all the Texas breweries working with us. We really wanted to stand out by showing just how much we support local Texas companies. Our burnt orange wings are very popular. The meat we use in our gourmet burgers is Texas-sourced.
What defines a “comfort food,” for you? What does the restaurant do in specific to live up to that definition?
Comfort food to me is something that makes you remember. It’s fresh, satisfying, hot-out-of-the-oven. The smell and taste should take you back to a memory you loved and could never forget. Draft Pick currently serves “traditional” comfort foods, but with our new menu we will feature comfort foods you’ve never had before. From our chicken fried steak to our burnt orange chicken wings, out-of-the-oven pizzas & gourmet hamburgers with fresh Texas meat.
On Draft Pick’s website you state that you want to create the “ultimate venue for game viewing.” In your opinion, do you think you’ve accomplished this goal already? If not, what needs to be done to turn dream to reality?
I think we have accomplished this. We have the largest high-definition screen in Austin that will always feature the top game of the night. Smaller televisions run along the walls with different games for those looking for something else. You’ll never see the same baseball game, the same basketball game, on every screen. If you like basketball, we’ll have a game on; if you like professional and college games, we’ll have both.
What mistakes do you think you made, if any, in the beginning? What have you learned from them?
I don’t think we had a single idea we wanted to stick with. The sports bar idea really took off, but we want the focus to be on our food and atmosphere. We’re classier than a sports bar and our building really reflects that.
What steps do you take to ensure that both rabid sports nuts and less athletically inclined folks have a culinary home at Draft Pick?
We try throwing events everyone would want to attend. We had our first beer tasting in January which was a huge success. We learned a lot from it and are stepping up the game with our next one in April. We gathered a lot of feedback from our crew and customers who attended and have established something much simpler and redefined. Another reason we wanted to redo our menu was to show that we are a restaurant you can take your wife or girlfriend out to eat to. We have a private dining room for parties and our interior screams modern upscale.
What lies ahead for you in the coming year? How can we, the loyal eaters, expect Draft Pick to continue evolving and changing?
You can expect a new menu, rotating Texas beers (they are updated seasonally and in between), more events ­– sports-related and not. We’re refining ourselves to improve where we’ve been lacking and to boost what we’re already succeeding in. I'm currently working on live entertainment for Draft Pick, and it's been exciting to see the Austin talent. Can't wait to see them up on stage.