This is One Year In, in which Eater Austin interviews chefs and owners on the occasion of their restaurant's first anniversary. This week, we speak with Executive Chef and General Manager James Roller of Ten Oak. 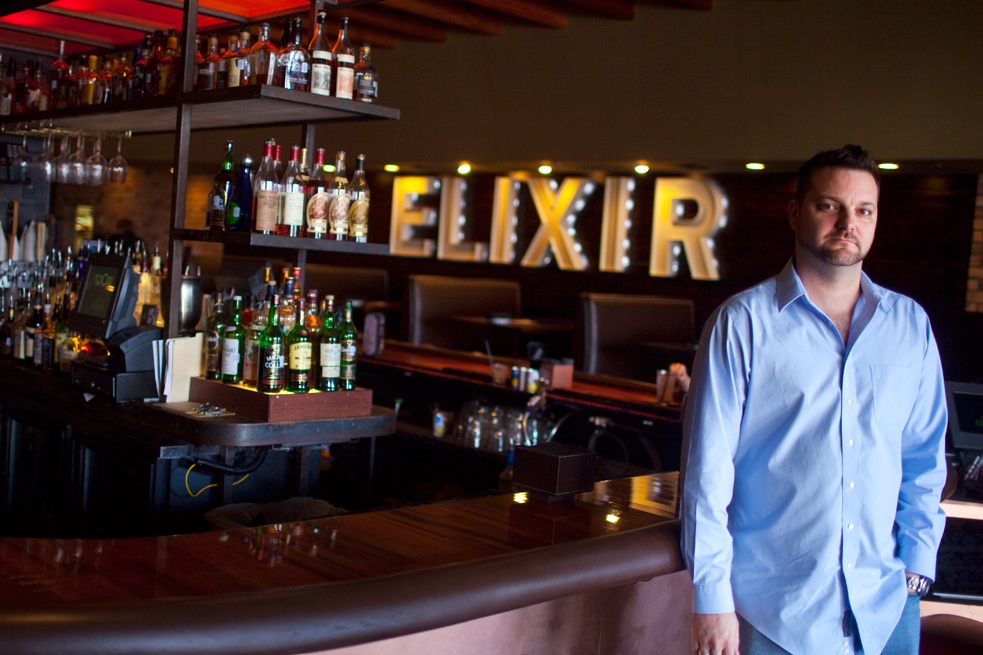 When executive chef and general manager James Roller of Ten Oak opened his "Bourbon House and Lounge" this time last year, he set out to combine rock bottom prices with oak-oriented ambience. His downtown restaurant and bar opened in April 2011 with a commitment to southern food and nostalgia-fueled specialty cocktails.

Taking a break from all the bourbon swishing that comprises his day to day existence, Roller chats with Eater Austin contributor Emma Kat Richardson about Ten Oak’s humble, sapling-like origins, how new menu items are born, and what it takes to get to the base of a stiff, woody drink.

What sort of guidelines did you lay out for yourself when you were first getting started? What initial vision did you have for Ten Oak?

The guidelines were, basically, that we knew we wanted everything to be Ten Oak oriented. That is to say, all the food would be around $10 a plate, in order to be affordable for the consumer. And then there’s oak of course, which is anything considered to be in the oak family, as far as beverages specifically go. Everything from wine to scotch to whisky, everything of that nature, would be a bit higher class and derived from an oak base.

Sticking with that theme, were there any specific goals you set out for yourself that you feel you’ve stuck to as the year has progressed?

Yeah, definitely. We just get out there and try to be ourselves every day, you know? We’ve had to change things up a bit due to market fluctuations and what not, and stepped around a bit while finding our niche, but we really like the formula we’ve come up with so far. We’ll be tweaking a couple things here and there, of course, but we really like the direction things are headed in.

Describe the evolution of your menu to me. Has it evolved in any ways you would never have previously imagined?

Well, when we were first getting started, I wanted to work a lot with bourbons and whiskies. We were looking to craft an upscale bar menu. We have been dealing with things like chicken fingers the whole time, but we do have many upscale things about even menu items like that. We’ve gone through a lot and have spent much time contemplating what works and what doesn’t; we’re always interested in trying new things.

How do you draw inspiration for new menu items? Do you constantly look for ways to improve the older ones?

For sure. A lot of it is thanks to customer feedback – people will say “oh, this was great, but?” Customers will frequently give us their honest opinion of what could have improved something, and we always take that into account. A lot of it is trying to discern whether these types of changes would work for everyone, or just for certain individuals.

I also try to eat out at other places whenever I can. Obviously, this is a pretty good time for food [in Austin]. I strive to take existing ideas and put my own spin on them – never to copy anything exactly, because that would be plagiarism, obviously – but I’ll look at items on a menu and try to figure out how I could do it. Maybe it’s as simple as mixing up the protein, adding some fish, you know, that kind of thing.

Do you have any other sources from which you look to shape your food?

Yeah, I do a lot of reading and research, too. Sometimes I’ll try to fully realize just something I’ve thought of, or invented, and I’ll give it a whirl to see if it actually works. Sometimes my friends will send me pictures of different stuff to eat in different towns.

I was intrigued by your specialty cocktails, which aim to bring back childhood notions with alcohol. How did you go about finessing youth out of decidedly adult beverages?

Basically, we hired an initial group of bartenders, and they came up with the idea. We brought this to the owner, and they decided together what would work and what wouldn’t, and we left the bartenders to their business; we pretty much let them do whatever they wanted, as far as the specialty cocktails were concerned.

Have there been any specific mistakes, from your perspective, that were made in the past year? What did you learn from them?

Mistakes in what aspect? Just overall?

Yeah, referring to the overall operation of the restaurant. Perhaps there were some menu items that didn’t quite work out?

Well, there are always selections that aren’t going to go over well. You’re always standing in between a miss and a hit. I think every restaurant has some things that work out and some that inevitably don’t.

Were there any mistakes specific to Ten Oak that you can recall?

I’m trying to think, because believe me, it’s been a long year. We changed the original notion of putting a band on the patio on Wednesdays. We’ve now started doing this nice acoustic set arrangement during happy hour on Fridays, out on the patio. We’re trying to start doing more stuff out in the front now, because it helps bring people in.

Did you work to cultivate a Southern-themed menu, or was it something that developed organically?

Well, I’m a Texan. I LOVE Southern food. When we started out, the idea was to do more of an upscale menu, and we kind of reverted down to that. When we started to conceptualize things, I had this idea in my head that the food we wanted might not fit the atmosphere. The atmosphere was going to be very dark: dark wood, dark leather. We modified the menu to match that.

Can you tell me more about the “one-of-a-kind trunk table?"

It’s an oak tree that was split in half. I’m not sure how much it weighs, but it took eight of us to bring it in here and set it up. It was just plain wood when we brought it in, but we put the finish on it, and then stood it up to its current location on the premises.

What steps have you taken to differentiate yourself from your competitors? We’re in the middle of a Southern foodie hub here; surely there’s no shortage of competition.

I think it’s the overall vibe of the place that really does it. We’re not stuffy, and we’ll educate people. We’re not just trying to force the most expensive thing on them. We also strive to make good, friendly hospitality a top priority.

Tell me a bit about your background. How has your past and experiences shaped the character that Ten Oak has taken on?

I was born and raised in Texas. I went to high school in Fredericksburg. I spent four years in the Marine Corps, so I bring in some of that good discipline from within myself [to Ten Oak]. After I got out of the military, I went to culinary school in San Antonio. Through and through, I’m a good old Southern boy – very laid back, enjoys a good beverage now and then. I want to be able to go into a bar and get a drink and not feel like there’s any judgment going on. We’re all about good times, good drinks, and good service, as a result. It’s what we try to do.

In your opinion, what would you say is the knockout item on the menu right now, as it currently stands?

Let’s go for one of each.

As far as food goes, I’ve had two favorite things on the menu from day one, and I don’t know if I could pick. I love the mussels, which are served with bourbon instead of the tradition white wine, which gives it a nice little kick. Then there’s the pulled pork. Pulled pork works as a slider, and with nachos, and it’s just awesome.

What is your vision for the future of Ten Oak? What, in your mind, does the next immediate year look like for you?

A Guide to Austin’s Most Exciting Pop-Ups Right Now