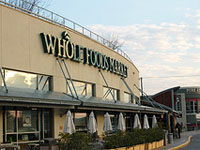 Whole Foods has announced the opening dates for its first two new stores since the late 1980's. (They're not including "relocated" stores.) The first will open at the Hill Country Galleria in Bee Cave on May 16th, and the second in southwest Austin at Loop 1 and William Cannon on June 19th. They'll have all the bells and whistles: in-store bars, electric hippie car charging stations and "chef-prepared foods, but only the Bee Cave store will have outdoor seating. [Eaterwire]

The Best Things the Eater Austin Team Ate This Week: Steak and Cheeseburgers

Ask Eater: Where Can I Find the Best Flour Tortillas in Austin?

Where to Find Awesome Corn Dogs in Austin