This is One Year In, in which Eater Austin interviews chefs and owners on the occasion of their restaurant's first anniversary. This week, we speak with Chef David Bull and Scott Walker, Partner and Vice President of Operations at Congress, Bar Congress and Second Bar + Kitchen. 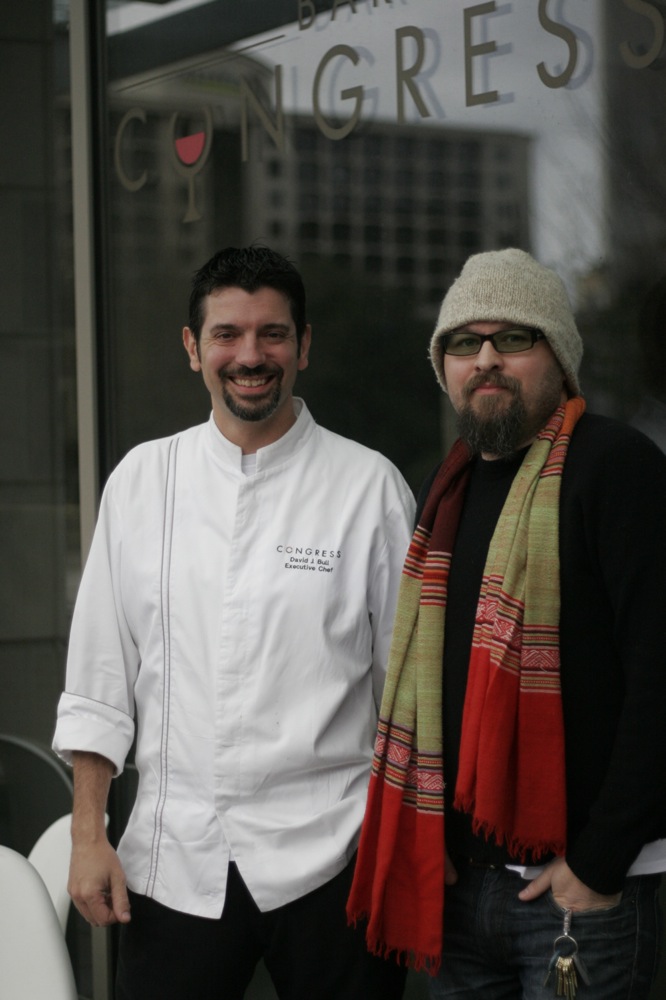 The Congress, Bar Congress and Second Bar + Kitchen group officially opened on New Year's Eve when the calendars flipped from 2010 to 2011. In just over a year in business, David Bull's triad of eateries (and drinkeries) has charmed Austinites, even those initially skeptical about the condo-driven, mixed-use explosion of high-rise and high-end establishments downtown.

We sat down at Bar Congress to talk with Chef Bull and partner and Vice President of Operations, Scott Walker, about their banner year, how recipe development was like reality television, and new hires Jason Stevens behind the bar and pastry chef Erica Waksmunski.

What was the initial vision for this group of restaurants? How does that compare to what it’s turned out to be?

David Bull: I think we set out to create three different outlets in the same location, to provide an opportunity for the community to have different avenues to experience different food and wine experiences. I think we had an intention to have them be very different, but they’ve really taken on their own as a complete unit. But then they’ve also got their individual pockets of self-promoting that has really been a surprise to us. How well that they coexist together. After a year, I think I’m pleasantly surprised that the outcome has been what we’d hope for. Certainly there are pockets of opportunities that constantly require attention but overall, it met exactly the expectations and even exceeded the expectations that we had for the design and the capacity that we set out to achieve.

Are these restaurants designed for this specific space, or did you formulate the idea before you saw it?

David Bull: We’ve had experience at hotels where we’ve always had a high end and a casual restaurant and obviously a huge bar component, so when this space became available we pulled from what we were good at and what we already knew. It’s location-driven based on the two entrances, the two streets, the size, the capacity. It fit in very nicely to what we had already succeeded at in the past.

Scott Walker: I think we wanted to make it a little more organic. I know when I left in ’07 there was a little bit of resistance in the community with all the condos, what, eight towers? all going up at once and stuff like that. We wanted to do something that felt local even though it’s a streamline, nice, opulent building. I think it’s still very approachable. That was always important.

DB: It’s ironic, on the location, but you can still come in and get a ten-dollar pizza. Still feel very casual. It’s very welcoming. Or get a Lone Star (beer).

How do you stand out from downtown’s growing population of high-end eateries?

SW: I think we have a little bit more local flavor.

DB: Yeah, the staff has a lot to do with it. The team we’ve assembled has a lot to do with it. The difference is that it is locally owned. We are the owners and the operators that function here and work here every single day. Which is I think different, I think different not just in Austin but in general as far as restaurants are concerned sometimes. We spend a lot of time in making sure that this has become part of the community and is a restaurant for the city of Austin. I think that’s evident in the value-driven concept of Second Bar + Kitchen and in the celebratory concept of Congress. We are here just to simply create good food and wine experiences for everybody, at every level, every day of the week.

SW: Yeah, I don’t know that we spend much time thinking about, like, what’s going on out there because we’re so preoccupied with what’s going on here. I think we have our own vision and what it is that we want, and this is the direction we’re going.

DB: Based on guest response and interaction, we want to continue to evolve and to make Austinites happy.

Demonstrably, you’ve done that with the multitude of awards and critical acclaim. Are you surprised at the overwhelmingly positive response?

DB: We were surprised at how quickly it came. In my career, it’s always taken certainly a year, before most writers and media will allow themselves to come. We definitely were confident in what we were producing as far s the product on all levels for all the concepts, but I was surprised at how quickly it happened. And in the amount of time that we were here, to get Best New Restaurant in Esquire and Bon Appétit, five stars locally, the only five star restaurant. It all happened very, very quickly.

We were surprised at how fast, but we knew that we had a great, solid product. The opening of these concepts started two years before we opened. So it wasn’t like we were in the development stage for the first six months. We hired the people that we loved and trusted and could do what we wanted to achieve, so this is where we are today. Everybody understood the expectation and everybody understood the goals. It was just a matter of getting the job done. Fortunately enough, we did it pretty quickly and did it well. We spent a lot of time in recipe development and staff training, so when we did open the doors to paying customers, we were pretty confident that we were ready to go.

SW: Yeah, we always intended to have a great product. But I don’t know that we ever intended to win awards and stuff like that. It’s icing on the cake.

DB: It is. It’s always a bonus; it’s not the intention. It’s nice to be recognized, but. Yeah.

Tell us more about your recipe development process, how did you develop two menus with two very different missions for Second Bar and Congress?

DB: We spent about three weeks at the local culinary school, Le Cordon Bleu. They partnered with us and helped us get space in their labs and kitchens. We started preparing and testing all the recipes for both of the restaurants over the course of three to four weeks, so not only were we able to identify problems and issues with the dishes themselves, but were able to create camaraderie between the staff. To cook all the food and to prepare and work ten hours a day for four weeks allowed us to resolve staffing issues as well. It reminded me of a reality TV show, but there was no TV at all. It was okay, you’re not going to make it, you’re awesome. They didn’t know it, but they were really fighting for positions in the kitchen through that process as well. So it was a very beneficial process to get the dishes down, to get the staff down, walking in and knowing it was just a matter of set-up. It was very helpful to the process. Took away all those opening hiccups that are pretty typical that you can’t foresee. Not that we didn’t have a few. We took some of them away.

What do you feel like you’ve smoothed out since the first opening days?

DB: From the food side, we’ve smoothed out operational efficiencies, from station set-ups to organization, product identification and specifications in terms of what really works. Getting our pricing where it needs to be. How people order in the restaurant dictated how the kitchen needed to respond, from small plates to the percentages of tasting menus. All of those things dictate the level of staff, amount of staff, amount of product, bar levels, communication systems. It’s a constant state of evolution to make sure we’re ready for what the guest experience demands.

SW: And the volume at the start was pretty heavy. At Second Bar + Kitchen it was a lot at the very beginning.

How do you provide guests the experience they love or have come to expect while evolving your menu and expanding your vision?

DB: That’s probably one of the biggest challenges on the Congress side because of the limited menu aspect. People come in and eat the lobster bisque and say oh, that’s the best lobster bisque I’ve ever had. To us it’s six months old or three months old. To constantly change that menu, we’re at a point where now there’s a trust factor. People come into Congress and put their night in our hands and we take that very seriously.

The evolution has got to be there. It’s something that people expect and demand from a restaurant like Congress. And at SBK we constantly have fun with seasonality and locally driven product. It’s just a constant effort to change and keep everything exciting and challenging, but at the same time sticking to the staples that people have come to appreciate and look forward to. It’s a tough spot. It’s always a challenge on what to change and what not to change, from seasonality to guest expectations, it’s a fine balance to get it right.

SW: Yeah, there’s certain things that if we pulled them off the menu, we’d get lynched.

Tell us about your new bartender, Jason Stevens.

SW: I ran into Mr. Stevens at the East Side Show Room last summer and just kind of hit it off with him. Just kind of stayed in contact. Adam Bryan, our former bar manager is going on to do his own thing on the East Side, and told me about that and Adam had always been clear that that was the next step for him, that he was going to open his own place. Which I think he’ll be great at. When that happened, Jason was really the first and the only person I contacted. He’s very guest-focused. He’s creative. Just really fits the space. He’s a very calming influence. He’s someone we all wanted to be around. It was a no-brainer on my part. I was very relieved that he was into it as much as I wanted him to be a part of this.

So what’s next for Congress in the next year?

DB: We’re always changing. We’re working hard on the Congress menu right now and the Bar Congress menu. We’re going to focus pretty heavily on lunch and brunch in the first half of the year. Our new pastry chef just started. I’m really excited to see her impression of the Austin pastry scene.

For more One Year In posts published today across the Eater Universe, head over to Eater National.