Share All sharing options for: Gourmands Owners Morphed An East Side Tejano Club Into A Family-Friendly Sandwich Shop In No Time At All

This is One Year In, in which Eater Austin interviews chefs and owners on the occasion of their restaurant's first anniversary. This week, we speak with Caitlin Shea and Tiffany Russell of Gourmands. 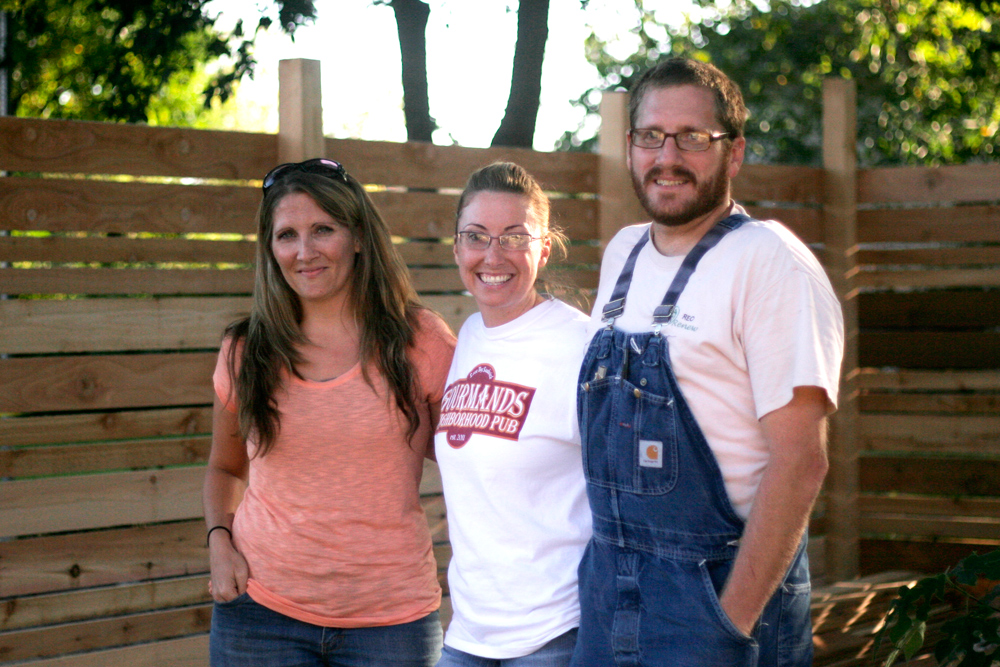 Before husband-and-wife pairs Caitlin Shea and Benjamin Siewert and Tiffany and Mike Russell opened Gourmands in October 2011, they figured they'd open a little neighborhood bar that served food. A year later, to their surprise, they're running one of Austin's premier sandwich shops and adding on a sizeable patio to accomodate the regulars and destination diners that flock to the former Tejano club for their incredible Bloody Marys, fine beer selection and friendly service.

Eater Austin sat down with Caitlin Shea and Tiffany Russell to debrief on a year of building their dream bar—one that went from zero to under construction in a matter of days just last summer.

How'd you all get the idea to open Gourmands?

Shea: We've all lived in Austin for about ten years now, and we'd always fantasized about having a family-run bar and restaurant with Mike as a chef—Tiffany's husband. So we'd sit around and say, 'It'd be so cool if we could have our own restaurant! It'd be family run!' We had kind of explored one other location that didn't work out, and then Ben came across this location, and it was kind of like a hurry up and decide kind of thing. So we made a split-second decision to do it. And we literally went from like, idea phase to do-it phase in like ?

And when was that?

Russell: July. I think about July 1st we came in and started working on everything. We didn't have a budget for anybody to do anything except for us. Our friends and us, we spent the next couple of months in here doing absolutely everything. Building the bar. Painting twice because we didn't like the color the first time. This place was crazy, it was a Tejano club. Blue and yellow. It had a disco ball.

We tried to pick a color kind of off the chairs, and it ended up looking like moldy walls?

Russell: It was just all bad. So we pieced everything together and picked it all up out of restaurants that had gone out of business or off auctions or off Craiglist. That's how we did it. It was very interesting. It was not planned. It was like, 'Alright, let's do this!'

Why did you decide on sandwiches as your menu focus?

Shea: We were looking for something that would be affordable for the neighborhood. Anyone could come in and have a meal without it being too expensive. Originally we thought that we were going to be a bar that had some food, and we wanted it to be quality, wonderful, great food. So we decided on a bunch of sandwiches and appetizers. Basic, good, healthy food. But now people love the food so much we're pretty much a restaurant with a bar. But sandwiches really, for affordability, we wanted a neighborhood bar feel, we didn't want anything too fancy.

Russell: We had a bar in Tuscon where we're all from that we really loved that served great sandwiches and soups. And I think with that, with me being the one vegetarian out of the group, we wanted a lot of vegetarian options. And with the neighborhood we realized we needed vegan options as well, which we hadn't thought about. But I think we were pretty good about implementing that as fast as we could and giving them some options over just a salad.

Shea: And the east side, when we were opening, didn't really have any kind of big, sandwich lunch place around.

What was the initial, day-one reception to the bar? You're kind of hidden around the corner here.

Russell: I felt like it was a pretty good reception right from the beginning. We did a grand opening with the list of all of our friends and family to just get them in here, and I think there was about 250 people on our list. And then it was just neighborhood people.

Shea: And I think that because Ben and Tiffany also have a real estate company, we had a lot of people in town that knew about it, so it was kind of a really nice first couple of months. It was a really good opening. And then the neighborhood people started trickling in once they realized we were open. It actually worked out really well, because we were just slow enough to get everyone used to what was going on and then we've steadily built since then, at a great pace, I think. Making sure that everyone's taken care of.

What would you say has been the biggest challenge in the last year?

Shea: I think we feel a huge responsibility to our crew, more than a lot of other businesses. We want them to succeed and not have to go find another job, or want to.

Russell: There were a lot of things that I don't even think we thought of that came into play. Lots of stuff we hadn't planned for that was a lot of work.

What about this area appealed to you and enabled you to decide so quickly to pounce on this location?

Russell: Well, [Caitlin and Ben] are a mile from here, and I'm up the road, so it's right between our houses. And this neighborhood doesn't really have much in the way that people can walk to it, I mean, besides the bars on Sixth Street? You know, there's nothing that they could walk to. And that's really what we wanted. And we noticed that Frontier Bar was going in after we came in here, and we thought oh wow, this could be a really great opportunity to get the neighborhood walking on this road again. Because nobody ever came down here. I remember walking my dogs for a few years and being like, alright, let's go on Webberville! Now, people can really go on it. And I feel like in the next couple of years, it might fill out. Not crazy, but people are seeing that there is commercial over here. There's not a ton of opportunity on the east side for good spots if you don't know the inner connections.

So you had an advantage there with your real estate experience?

Opening the place so quickly, how did you teach yourselves to run a bar?

Shea: We'd all worked in a bar or restaurant in some capacity, but not on the level of what we were needing to do. We all had an idea. I'd say that we are the type of people, if we don't know how to do something, we just figure it out and do it.

Russell: And do it well.

Shea: So if we didn't know how to do something, we researched it, figured it out.

Russell: And Mike went to culinary school and he's been a head chef, so he's got that kitchen down, thank god.

Shea: He took over the kitchen and that was not a problem. It's more the front-of-house stuff that we've figured out.

Russell: And the three of us have the experience from the past, which made it easier than if we'd just decided to open something and not know much about it.

Shea: I think we really envisioned a bar with food, and now we're a restaurant with a bar. That's been the biggest flip for us. Food sales have just gone through the roof, which is great. Now, we're very family-friendly. I love it. The neighborhood has really embraced us. We have kids come for their birthdays because they love it here. That's been really unexpected for me. It's been so great.

Were you expecting something a little rowdier?

Shea: Not necessarily rowdier, but you know, bars on the east side are thirty-somethings, going to the bar. I'm glad that families come in and enjoy us and not feel like they can't because it's a thirty-something bar.

Russell: And I think our crowd is a little bit older than anything you see on east Sixth. Which has been really good for us because a lot of people come in and they're like, 'I don't feel like I can go anywhere else and just chill out, because it's skinny jeans and I have to be of some sort of fashion, and I just want a good bar to drink beer in.' They just want to chill. And to successfully provide that, it's been really amazing. And we get every different type of person in here and they all mesh well together. Which is something that we hoped for, but is not easily achievable.

Food-wise, what are your big sellers?

Russell: The "Second Deadly Sin" is one of our best. The "Cleopatra," vegetarian sandwich is also in our top five.

Russell: And I think when people first come in here, they're not excited about waiting ten or twelve minutes for a sandwich or soup, but they don't really get it, at first, that there's so many components. We flat-top grill our breads and put their bowl in the oven when they order so it's ready. It's not like going to Subway where they're just slapping it on there. It's gourmet. Mike hates the word gourmet, but they are gourmet sandwiches.

How'd you come up with the name?

Shea: We spent weeks trying to come up with a name. And I think it was Ben who was finally like, 'What about Gourmands? It literally means people who like to eat and drink in excess.' Which is us! We are gourmands.

Russell: So you go through life a little bit drunk all the time, and you eat really good food and a lot of it. That's what it is.

After 70 Years, Clarksville Icon Nau’s Enfield Drug Will Close for Good in 2023