Share All sharing options for: Beer Week Bike Crawl; Gourmands Gets A Patio 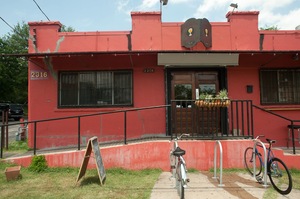 EAST SIDE — The Gourmands sandwich shop and bar is in the process of installing an outdoor patio for patrons' al fresco pleasures. [Eaterwire]

CRIMEWIRE — Downtown nightclub empresario Mike Yassine, whose Yassine Enterprises group owned the likes of Qua and Treasure Island, pleaded guilty to one drug charge this morning. His nightclub group was raided earlier this year by the FBI and other law enforcement groups, prompting another criminal trial that ended last week in guilty verdicts. [Statesman]