Fall Restaurant Week Coming at the End of September

Share All sharing options for: Fall Restaurant Week Coming at the End of September 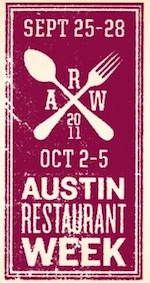 The full list of participating restaurants isn't on their website yet, but the press release below mentions Olivia, Uchiko, Haddington’s, Sullivan’s and Paggi House. As an added bonus, a portion of proceeds from each restaurant will go to Austin's Meals on Wheels. Also, there's an iPhone/Android app that allows one to find out details and make reservations. Here's the press release:

AUSTIN, TX (SEPTEMBER 2011) - Back this fall, Austin Restaurant Week will take the city’s culinary scene by storm once again in late September. The two-week foodie event, taking place September 25-28 and October 2-5, allows diners to experience the latest additions to Austin’s restaurant world as well as revisit trusted favorites without the normal costs of dining out. The bonus is that a portion of the proceeds from each meal will be contributed to Austin’s local Meals on Wheels program. “It’s a great chance for people to get out in the community, check out something they might
not normally, and on top of that, it goes to a great cause,” says Austin Restaurant Week Founder, Taylor Perkins, who began Restaurant Week in 2007. Perkins has successfully grown the culinary-driven event from a small occasion with a local following to a twice-a-year extravaganza that draws growing numbers of local restaurants and foodies alike.

This year, 64 local restaurants will participate, including Olivia, Uchiko, Haddington’s,
Sullivan’s and Paggi House, to name a few. Diners will be privy to special prix-fixe menus designed exclusively for Austin Restaurant Week. Menus will feature three-course dinner options ($25-$35), two-course lunch options ($10-$15), and brunch menus ($15-$20) that include a complimentary cocktail or non-alcoholic specialty beverage.

In order to make patrons’ culinary adventures over the course of the two weeks as seamless as possible, the recently launched Austin Restaurant Week iPhone/Android app details locations and menus, has a check-in feature, and even allows guests to book their reservations, all without looking up from their smartphones. Diners are encouraged to make reservations via OpenTable either through the app or the ARW website (www.restaurantweekaustin.com), ensuring them a seat at their favorite Restaurant Week spots. Additionally, printable maps are available on the Austin
Restaurant Week website and at any participating restaurant for easy pick-up.

Founded in 2008, Austin Restaurant Week was created to celebrate the city’s unique culinary milieu. ARW offers local foodies and visitors a chance to try an immense variety of Austin’s amazing restaurants at a fraction of the normal cost. This two-week celebration of local dining is the perfect opportunity to enjoy new additions and seasoned favorites, as each restaurant provides special prix-fixe menus for the week. The culinary cross section includes dinner, lunch, and Sunday brunch menus complete with cocktail pairings as well as special gluten-free and vegetarian options.