Welcome to The Gatekeepers, in which Eater roams around the city meeting the fine ladies and gentlemen who stand between you and some of your favorite hard-to-get tables. This week: Dan Wyman of Parkside. 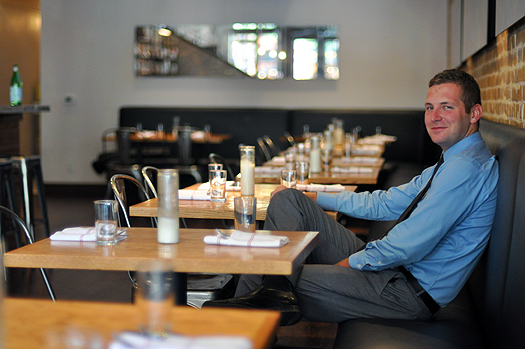 What about earlier in the night?
Since we do a happy hour seven days a week now, Saturday's usually not bad at all — you can usually cruise right in and sit down. Friday — we pick up a lot more with the happy hour just because I think everyone is ending their week. But you're only going to be looking at about 20 or 30 minutes on a Friday.

Do people ever try to slip you cash or anything for tables?
You don't really see it that often, no. People have tried to do it before, but it's usually during SXSW, when it's packed — we'll do like 700 to 800 people in a day and night. People try to get in so they can get to a show. But other than that, you don't really see it, no.

Has it happened to you — ever — as a host, not necessarily at Parkside?
Not really, no. I think they hit up the hostesses more than me, actually. It's funny.

How many seats are there in the restaurant?
At any given time, if we're completely sat, you're looking at almost 300.

Do you have regulars, and what are they like?
We have a really good base of regulars, we have people we'll see at least once a week. And we'll also have randoms that you'll see two or three times a week. But it's funny, after a while once you get to talk to them and you see them so much, it's like having your friends come hang out at work. You definitely get to know a bit more about people, their background, and what they do. When I see them out of work, it's kind of like I already know them.

Do you get a lot of celebrities coming here at all?
We're really low-key about celebrities coming in — we don't tweet about it or anything. We really try to accommodate them. They live that life of being in the big picture for everybody, so we definitely try to offer a private, personal setting for them. Just so they can still be in the energy of downtown, but don't have to be the focus of what's going on, and just have a normal night out.

Anyone in particular that you remember?
[Laughs] Not gonna tell 'ya.

What happens if the restaurant is packed and a VIP comes in?
We'll definitely try to shoot them in as quickly as possible. We have a lot of options with the space that we have for moving people around. We'll definitely do anything we can to get them in. There was a time where we asked someone if we could take one of their tables. In reality, it ends up working out for the people we ask because more than likely, we'll end up buying your whole dinner. But people are really cool about it.

What's the most outrageous request you've ever received from a customer that you could accommodate?
On any given Saturday, we're looking at between 350 to 400 covers that we're going to do, so it's busy. I'd say like a table of 25 trying to come in at 8:00PM, just like walk in. It shocks me that we actually made it happen before. Usually with a situation like that, we'll try to squeeze everyone in on the patio, if they're willing to be flexible.

What about one you couldn't accommodate?
There's another time when we got a phone call in the middle of the rush, and someone wanted to see if we could deliver one thing to their house. And we don't deliver. So that one couldn't be done, but it was a funny phone call.

What did he order?
It was like a burger, or something.

So how long have you been working at Parkside?
Almost two years.

What brought you to Parkside?
I actually moved here from California. I met [Parkside chef] Shawn [Cirkiel] the first couple weeks I was here. We met a couple times, hit it off — we just had a good kind of chemistry together. And we were shooting toward the same goals as far as business aspirations, and taking this to the next level so we can work on our newer places. So, since I've been here, we've opened one other restaurant, [Backspace], and we're always looking to do more.

What's your favorite table in the restaurant?
Table 60 (corner booth in the main downstairs dining area). I'm a people watcher, and here you have a full shot of the dining room as well as a full shot of the windows right behind you. It's fun, there's always something crazy going on around here. It's an interesting scene when it's packed — there's always something to check out.

What's your favorite thing on the menu?
Probably our steak tartare. I would have to go with that, or the marrow bones. I've never really had marrow bones before here — it's delicious.

When you're not at Parkside, where else do you like to eat around town?
You're bound to find me at La Condesa on one of my days off. I love the concept and cozy feel of Backspace. It really depends on what I'm going out for, too. If it's dinner, I'm an avid fan of Uchi. If I'm doing brunch, Lamberts has become my new favorite brunch spot.

What about drinks?
I go to Pêché. I really enjoy Pêché, the bar staff's a lot of fun. If I'm just taking it easy, I'll go get a glass of wine at Paggi House. I went to Wink for the first time the other night and sat at the bar there, that was really nice. I just really like the vibe — it's nice and small. It's a place where you can kind of get away. I mean, you're exposed to so many people here everyday, so when I get out it's nice sometimes to take it easy and relax.