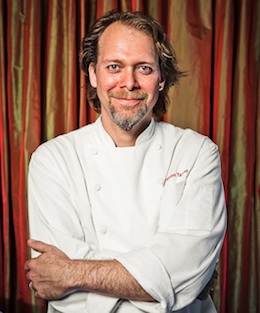 34th Street Cafe has announced they're bringing on executive chef Jason Tallent, who returns to his home state of Texas after several years at San Francisco restaurants. Tallent has, in the past, worked at Bay Area restaurants Rose Pistola, Tracy de Jardin's Jardiniere, and most recently at the Globe.

Tallent's got some tricks up his sleeve for 34th Street Cafe, and plans on revamping the dinner menu, offering prix-fixe menus and having special event dinners. Tallent tells Eater, "I just want to serve good food, try to source from local farms as I can...thanks heat for making that a big challenge. I am glad to be back in Texas, the people here are just so nice."

Along with the team at 34th Street Café, Chef Tallent will be transforming the dinner menu, prix-fixe menus, dessert offerings, and special event dinners over the coming months. The food will continue to maintain a focus around seasonality and local produce as well as sustainable meats and seafood.

After graduating from high school in north Dallas, Tallent studied photography at East Texas State University before moving to California to study culinary arts at the California Culinary Academy. By the age of 24 he was already Sous Chef at the James Beard Award winning restaurant, Rose Pistola. Tallent then spent time in the kitchen of Top Chef Masters television personality and James Beard Award winning chef Tracy de Jardin at Jardiniere. Ultimately, it was at Globe where Tallent made his most personal contribution to the San Francisco dining scene, having transformed the restaurant to embody a more seasonal, farm-to-table menu that eventually won acclaim for Best Late Night Dining by the San Francisco Chronicle. Tallent and his wife – who is also a chef – along with their two children, are returning to Texas to share their culinary passions with the great city of Austin.

Under Chef Tallent, 34th Street Café will continue its support of philanthropic organizations in the community, which in the past have included the Hill Country Wine & Food Festival, March of Dimes, American Youth Works, Travis County Animal Shelter, Aids Services of Austin, and HAAM, among many others.

Tallent and the team at 34th Street Café understand what makes Austin unique, and are excited to start this next culinary course along with the longtime loyal and soon-to-be customers alike!