Share All sharing options for: The Peached Tortilla's Eric Silverstein on Food Trucks and Plans For a Brick-and-Mortar

This is One Year In, in which Eater Austin interviews chefs on the occasion of their restaurant's first anniversary. This week, we speak with Eric Silverstein of The Peached Tortilla. 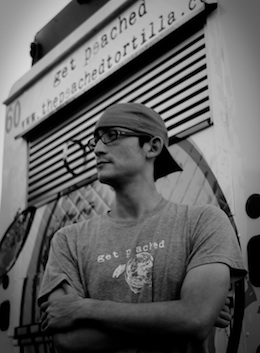 Years of practicing law in the bitter cold Midwest left Eric Silverstein ravenous for change of scene and career. So, he ditched the suit and tie and opted for wheels and an apron. One year ago, he opened The Peached Tortilla with a unique combination of Asian and Southern flavors. The idea was a product of his exotic childhood memories of traveling and living throughout Asia and Georgia. Below, Silverstein recounts why he chose not to open a restaurant, how unforgiving food trucks can be, and what has the chance of matching the success of Franklin Barbecue and the Odd Duck Farm to Trailer.

What was your original motivation to open a food truck?
Well, my goal was to open a restaurant, and with the economy the way it was, it didn't seem feasible. At my old job as a lawyer, we were going after a lot of companies that owned restaurants because they weren't able to pay on their leases, and I kind of got scared out of opening a restaurant. I didn't want to put too much of my personal assets on the line, so I had to figure out what the next best thing would be, and the answer was opening a food truck. That just seemed like a great way for us to test drive the brand without completely losing all sleep at night or worrying about whether or not we are going to make it or break it.

What was the tipping point that brought you over to cuisine? Being a lawyer seems like a far stretch from running a food truck.
I never was very passionate about practicing law. It was always more of a job to me. But honestly, there were a couple of factors. One, it was where I was in terms of my career as a lawyer. I was going into my fourth year in practice, and where I was living, it takes seven years to make partner. I didn't want to be pigeonholed as a lawyer, and I knew if I kept going and got close to the partnership level, I would have never left. I wasn't deep enough into it where I couldn't leave.

The other thing was there was another partner that I became pretty close with, and he would tell me that he always told his son to go into something other than law. It kind of stuck with me, like "Well, if these guys aren't that happy with what they're doing, and I'm not happy with what I'm doing right this moment, why would I be happy with this 10, 15, 20 years from now?" I also saw opening The Peached Tortilla as an entrepreneurial move. I didn't know of anybody that had married these Asian and Southern flavors before.

Do you come from a culinary background?
I don't have any formal training, but I grew up in a family where food was a quintessential part of our lives. It was a very impactful thing that shaped what we did on a daily basis. Growing up in Asia, I was exposed to all types of cuisine at a very young age and that really expanded my palate. My mom is Chinese, so she always cooked a lot of traditional Chinese food. When I was living in Tokyo, I'd eat the sushi and tempura. When you go to Singapore, Bali, China or Bali, you are exposed to a lot of Asian flavors. That was the centerpiece of our home. We didn’t really care what we ate, but we always explored these various types of Asian cuisine.

I’m not just someone who opened a food truck to try and try and make money. Food has always been very important to me. My dad was in the restaurant business as well. I’d see him open them, and I’d also see him close them, so I knew what I was getting myself into.

What made you come to Austin to open the food truck?
I knew I wanted to leave the Midwest. My girlfriend and I went over a few options, and I thought ‘Okay, these are cities I think I could be successful in, and the markets don’t seem too overly saturated.’ Seattle, Denver, and Austin were the three we thought about. At the end of the day, we knew Austin was the right choice because its economy was doing pretty well, and the right laws and infrastructure were in place for me to open the truck. I wouldn’t say the stars lined up completely, but we thought Austin was worth the shot. The lone drawback was obviously the incredible amount of saturation in the business.

When you arrived, what did you find most unique about Austin’s culinary culture?
I was surprised how open it was. People never came up to the truck and were like, ‘What is this?’ Everyone seemed really open to what we were trying to do. Austin just felt very carefree, and that was different than anything I had ever experienced before. Also, there is just more of a culinary scene here than anywhere else and more emphasis on it. People really pay attention to what they are eating here. As a chef, if you make something bold, it never goes unnoticed. That’s why I felt like our idea would work. I mean, there are thousands of trucks here, but if you can put out something that is ninety percent better than what is out there, you’re on to something.

How do Asian flavors compare to Southern ones?
Southern cuisine is a little more mild. Good Asian cuisine has very bold flavors. I really love Chinese food, but you can’t say you’ve had good Chinese food unless it has some really serious flavors. Southern flavors are much more subtle, but they are much richer. It goes without saying that there is a lot of fried stuff.

How have things changed for you in a year?
The food truck business is ruthless, and I don’t mean the people. I’d have to say it’s unforgiving and a lot of hard work. And truth be told, I didn’t expect it to be this hard. I joke about this a lot, but I feel like I’ve aged five years in one year. It has taken a lot out of me, and I knew the restaurant business was going to be tough, but food trucks have more added elements to them than restaurants.

Restaurants don’t worry about their restaurant breaking down on the side of the road. No matter how hard it is to work in a restaurant, at least you have air conditioning and running water. We have water, but we are always rationing it. It was an eye-opening experience, just figuring out how hard it is. Sometimes when you are an entrepreneur the first thing you think is ‘People are going to love what I’m putting out, the second I put it out. Day one, this thing is going to be on fire.’ But it doesn’t work like that. I’ve become very humble in a year.

It’s easy as a consumer to approach a food truck with, let’s say, a giant cupcake on it and think “Man, I’d like to run one of these!’ What would you say is one of the false assumptions about this business?
The media glamor makes it look glitzy, but it’s a tough job, and you have to be prepared to pay your dues. Unless you’re one of the lucky few, it’s going to be a rough road. You aren’t going to make a whole lot of money doing it, but you’ll be able to pay your bills. So, you have to go into this with passion, above all. If you have a light at the end of the tunnel and know what you are working towards, it makes it palatable.

You mentioned the restaurant idea earlier, and there have been a few like Aaron Franklin and Bryce Gilmore of Franklin Barbecue and the Odd Duck Trailer that have been able to transition into brick and mortar quite successfully. Do you plan on joining that crowd?
Absolutely. We are trying to get the wheels rolling on that. It’s going to take some time. Franklin had tremendous exposure and the same with Odd Duck. I’m not sure anyone can approach those two guys right now, in terms of their success. I don’t know who is going to fill those spots next, but there is a chance for another food truck to step up to the plate and be the new hip, hot trailer. I would say East Side Kings has a shot, and I’d like to see us do the same. Realistically, we can’t operate out of this truck for forever.

Are there any trailers or restaurants that you think are really on to something?
I’ve eaten at Love Balls. I ate takoyaki balls growing up, so I really loved their food. I’ve been meaning to try La Tasca, and I still haven’t eaten at Odd Duck, so I have to try that. Uchiko was amazing. Foreign & Domestic is next on my list.

What are your goals going into the second year?
I want to continue to grow and be a bigger presence in Austin. I feel like every month, we need to become much more of a staple to the city. As cheesy as it sounds, I want to be a household name. Within the next year, I’d like to transition to brick and mortar. If not into brick and mortar, I’d like to move towards at least going in that direction. This year is going to be less about trying to survive and more about moving forward towards becoming a restaurant.