Share All sharing options for: Owner Michael Polombo on How Haddingtons Has Changed 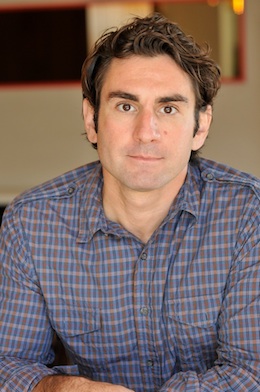 Restaurateur Michael Polombo has seen his restaurant Haddingtons undergo several changes since it opened six months ago, including the addition of a new head chef and a shift in the cocktail program's management. Below, he talks why the changes had to happen, why so many people from Brooklyn love Austin (and vice versa), and what's next.

I know Haddingtons has undergone a lot of changes (James Corwell replaced Zack Northcutt as chef, Bill Norris left to run the Alamo Drafthouse's beverage program) since opening. What's the story?
On the food side, or back of house, we initially lacked kitchen management, which led to a chef change, which is never fun. Our prior chef was a great guy, but really kind of had no direction there. Our new chef, Jimmy Corwell, he was hired originally to consult and now is on full-time. He's an expert on kitchen management. He creates incredible dishes in line with the elevated tavern concept of Haddingtons. So since mid-May our food offerings and ability to offer food have improved dramatically.

We now have a kitchen full of motivated people back there working towards a common goal. I'm very grateful for all their hard work. A lot of them are the same people we had prior, just now they have direction and they have a common goal and motivation. I feel like our food has been elevated by leaps and bounds. My hope now is that many of the folks who visited us previously will give us another chance. An opportunity to show the food that we're now creating consistently.

Another major change — we have an excellent drink list. We have had an excellent drink list from the start thanks to Bill Norris who was with us for some six months. We now have an all-around friendly, capable bar staff. All around friendly for the first time. One of the past problems we had was numerous complaints about some of the bar staff, and now I feel like we have a very customer service-oriented bar staff. Which is what I always wanted to be key and core to that aspect of the restaurant.

So in becoming more "customer service-oriented," are you still concentrating on the intense, bartender-driven craft drinks or is this a step back from that?
One of our current bartenders who has been there the beginning, Brandon Burkhart, has kind of assumed the head bartender position. He's done a lot of great there, he's done a fantastic job creating new cocktails to add to the list. He's fantastic and a great person to work with, too, which is key. I honestly can say now that our entire bar staff is great. You'd really be happy to sit down with any one of them and discuss cocktails, how the bar's going, et cetera.

I feel like we really did 180 degrees in terms of food production. I think the drinks were always good but we now have structure and accountability in the bar staff. Really grateful for that.

Would you say that all of this marks a readjustment of the concept of the restaurant or is it a move towards getting closer to the original idea?
If you're talking about overall offerings, and I'd say specifically towards food — I say that because our craft cocktail program has pretty much remained what it is and I feel like we've always executed great in that space. Our wine list has been constantly strong. What my idea for the concept was — and I think some people may have adopted something similar but it's certainly been found in other cities around the country — the elevated American tavern. So you have elevated cuisine, and by doing that it shouldn't be pub food, it should be elevated. And that was always the aspiration.

I can think of a new restaurant in New York City that executes in that way extremely well, been there three times in the past couple months, called the Dutch. Helmed by Andrew Carmellini. It's an American restaurant. The food there is fantastic, it's very much like what we aspire to and I think that James executes very well. There's a place called Longman & Eagle in Chicago, which I love and I've mentioned many times.

It's similar food. It's not so fussed over. It's really well-executed, well-thought out dishes. It's not just a big ham hock or quantity as the major attraction to each dish. Well thought out food in a tavern setting. What's supposed to happen with the overall tavern feel in the tavern concept is you have an environment where it's very nice and yet not so refined. You don't have the tablecloths or place settings, your very rigid staff etiquette. Things like that. A little more neighborhoody. We follow all those parts of the concept, but at the same time you elevate the food. People should be like wow, this food is amazing. Someone unfamiliar with the concept would be surprised how good it can get.

You have a couple restaurants in New York (Bin 71 and Barcibo). What are the major differences between the New York scene and the Austin scene?
I'm a part of a few restaurants in New York City, and also have sent my chefs here to New York to cook. Mostly recently I sent chef Jacob Weaver from Mulberry to cook at Diner, Marlow & Sons, he also trailed at Gramercy Tavern, one of Danny Meyer's restaurants. I would say there's a very strong parallel between the sensibilities in Brooklyn and Austin. I love Brooklyn like I love Austin, and just the kind of atmosphere. The feel.

For instance, Jacob's first time in New York was going to cook at Diner. He had a great affinity for Brooklyn, I feel like Austin people really respond and vice versa, Brooklyn people really respond to Austin. They love it and they talk about Austin restaurants. With Manhattan, you have a little bit of a departure, you have a little difference in prices. I mean, you want to provide value in both places, we certainly strive for that. But you would be a little more finer dining. Those type of places are more welcomed I would say in Manhattan versus Brooklyn. And certainly I think there's a place for that and I enjoy it too, but I particularly like a number of places in Brooklyn. Like Carroll Gardens is a great neighborhood in Brooklyn, it has Prime Meats and Frankies. I love those restaurants and love to take my staff there and show them those restaurants.

So what's going on at Mulberry these days?
Our chef, Jacob Weaver, who has really been helming the kitchen there for about a year, He's doing a fantastic job. He has a chef's series he does the first Monday of every month, he creates a menu specific to that day. And he's been doing an incredible job with that. We start reservations for those a few months in advance. Also we're working on a late night menu there, chef Jacob and I, which should be released in the next month. So we're still a little ways off on that. Mulberry's doing great.

What's next? Any new projects in the works?
You know, helping out a little bit with the most recent New York restaurant. Here, really my focus is on Haddingtons. Getting that to continue to improve and fine tune each service. I suspect that'll take me several more months at least to just really get to the point where everything is really operating properly and then we'll see. I have another part of the same lot that Haddingtons is on, and I've been in talks with people on some nascent concept stuff. But that's my real focus, is to just keep making sure Haddingtons and Mulberry deliver properly.