Share All sharing options for: Philip Speer of Uchiko

Welcome to One Year In, in which we interview Austin chefs on the occasion of their restaurant's first anniversary. This week, we interview Philip Speer of Uchiko (as well as Uchi). This time last year, Uchiko was in soft opening; we'll interview Tyson Cole closer to their official anniversary of July 6. 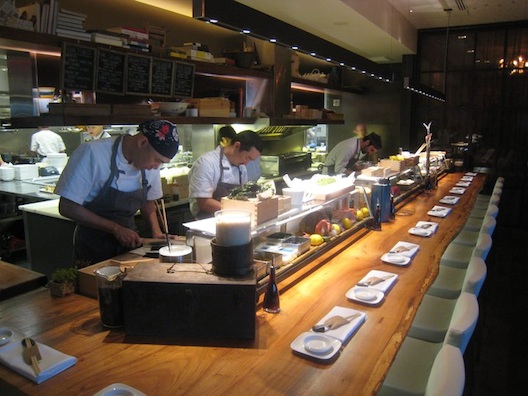 How is Uchiko different now from how it was when it first opened?
On a business level, on an executional and operational level, it's obviously a little bit more of a well-oiled machine. We're not all the way there yet. With Uchi and Uchiko, we originally thought it would be 90% of the same menu over here. And it's morphed into a menu that was almost 90% different — close to 95% different than Uchi. And so it was like wow, we have a whole lot of concepts here. So we went with that, and Paul's in charge of that. And Paul's food, which is very different from Tyson's food.

Since opening, we kind fell a little bit back into that Uchi model, while still definitely a little less refined. I don't mean that in a negative way at all. Uchiko is sort of the rambunctious child of Uchi. We fell a little bit back into that Uchi mode because that's what people were looking for as well. It was another way to keep us consistent in our approach to food. Now we have some of our Uchi dishes on the menu at Uchiko, and of course some dishes that have been modeled after Uchi but are more Paul's style.

And how are things going?
We're tremendously happy with the business we're doing. We're impressed, surprised every day with how busy we are and the amount of positive feedback we're getting. We're not your typical new restaurant because we have Uchi, but it's still a new restaurant. The level of business and guests and products we're getting is not typical of that of a startup restaurant.

We had some turnover of staff in the beginning. We have about 70% of the staff that we opened with, but that means that the other 30% are people that we've searched high and low for. I feel like the staff we have now is going to stick for a very long time. At Uchi we have a very, very, very low turnover. I feel like [at Uchiko] we have a pretty solid staff now, which obviously took a few months of weeding through.

We're finding our way. We're finding our style. The amount of accolades we've gotten, and the press, the nominations, all these things have just been amazing for us. We were really surprised. We didn't expect that from day one. It's been great.

How would you describe the concept of Uchiko as compared to that of Uchi?
I think the difference is Uchi will always be Uchi. While we definitely try to evolve Uchi — it's a living, breathing organism that evolves — we now have a larger company with a larger creative pool. More creativity in our pool. Uchi food will always be Uchi food. Whereas I believe Uchiko has a little more variety. There's a little bit more variety in styles and flavors. While you go to Uchi always expecting something new and different, you also always expect our staples. The more traditional sushi and sushi rolls. Whereas [at Uchiko], you're going to be even more surprised every time you walk in here. You're going to find things that are a little bit different, a little bit less traditional. That's the approach.

You work at both restaurants. Do you approach the two menus differently?
I don't approach them a whole lot differently. I've been lucky, with our menu and our guest base, to really kind of go for it with my desserts. And people have been accepting of them. There's not a huge, huge difference. I guess I try to be a little more forward [at Uchiko]. But at the same time I think I'm a little bit more familiar with the flavors here. Whereas at Uchi, I have a new pastry chef at Uchi. I'm still the executive pastry chef, but she — Monica, her name is Monica Glenn — she been a big help over at Uchi. And we have guys over here who are helping me here. So if anything, again, it's that larger pool. It's been great to have that to pull from. There's definitely differences still, but I don't approach them differently.

What was the most difficult part of Uchiko's first year?
It's just finding that consistency. You have a new staff, you have new brains. New habits to mold, to create, to enhance, whatever. All of it was really hard. It's still really hard. New systems, new protocols. Trying to keep it consistent and trying to keep the integrity of Uchi. A big part of Uchi is the Uchi culture. And trying to duplicate that? That's something that's grown over the years and it's hard to duplicate that somewhere new with new people. It's difficult. But it's fun. With Houston coming down the line in a few months, it's something we're going to try to develop 200 miles away, which is going to be even harder.

What's the next hurdle for Uchiko?
Our goal always is — and I know it's important to many of our customers as well — is to remain responsible. It's hard to, when you're doing 400 plus covers a night. There are so many people to feed, and we do the best we can sourcing our ingredients, really trying to remain responsible and use local ingredients. That's really one of the hardest things, just because of the sheer volume. We do that every night. The next step is to try to push that a little bit forward.

We're trying to — I want to say simplify? We want to make the food a little more fun and interactive. That's definitely the next step. After going to the James Beard trip to New York, we went and ate at a lot of restaurants, and one of the things we noticed was that the kinds of restaurants we were eating at, they're very interactive between service, food, chefs, everything. Just pushing the fun element I guess.

What do you mean by interactive?
Having cooks and servers both run food. It gives our guests another perspective of the kitchen. Cross training of positions in the kitchen and the front of the house to where we have a much more interactive experience. Trying to blur those lines between okay, now I'm being served by a server but my chef's cooking in the kitchen. How can we rearrange that and make it a much more interactive experience: guest, server, chef, food runner, whatever. How can the chef come tableside?

I'm not talking about stuffy chefs pouring your soups, but bringing out a liquid nitrogen dome to the table and smashing it in front of you. That's fun. Can we serve eight chunks of fish sauce infused watermelon that you eat with your hands and talk about and play with? Something that's a little different.

What's important to us is our guests. How we can evolve them more during their experience? How can we make their experience go from I'm going to a restaurant to eat dinner to I'm going to Uchiko to have this experience with their staff that's going to leave me happy and excited and inspired. That's the next level of Uchiko.