Share All sharing options for: Ned Elliott of Foreign & Domestic

Welcome to One Year In, in which we interview Austin chefs on the occasion of their restaurant's first anniversary. This week, we interview Ned Elliott of North Loop's Foreign & Domestic, which turns one today. 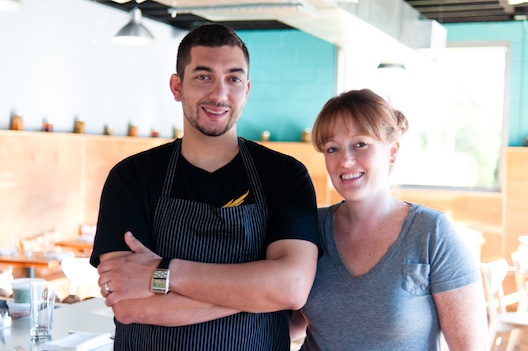 Husband-and-wife team Ned and Jodi Elliott opened Foreign & Domestic in the North Loop neighborhood on May 20 of 2010. One year later, the little neighborhood restaurant is still serving up small plates that are chock full of offal. In part one of our interview with Ned Elliott, we talked about paying dues, calves brains, and why they chose Austin over Portland.

Congrats on making it through your first year! How did you get here?
It's sort of surreal. I mean, background: I'm from Cincinnati, Ohio. I went to college at the University of Montana. Made it through three semesters before I finally — I say I dropped out, my moms would say I flunked out. I purposefully flunked out to pursue cooking. Worked at a greasy spoon for a year, then was a cook at a sorority for a semester, which had no perks, no benefits.

I've heard those are kind of sweet jobs, though, Greek cooking jobs. No?
I mean, it was weird because that house mother had been their chef forever, for like five years. And the house mother was all about being totally frugal, and would be like hey, go to the place for the second day bread, they want chicken fingers and french fries. And the ladies were like no, we don't want any of that crap. It was fun because we had Monday night dinner where they'd have all the? I have no idea, I was never a Greek, so I don't know what that's called. A big sit down dinner every week, just do something totally different.

But not exactly restaurant cooking.
Well then I found this place called the Hob Knob Cafe. The chef went to the Western Culinary Institute in Portland, Oregon. From there he went to Zuni Cafe and to Chez Panisse. And so he came back after five or six years in the Bay Area — he's from Missoula, his mom had a house on a couple acres. He just made those acres into gardens.

I started talking to this guy in '94 when I was still in school. I had the Professional Chef, [the cookbook] from the Culinary Institute of America. I got the Escoffier, the Guide Culinaire and all of that. It was kind of like okay, whatever. And then I got to this place, the Hob Knob, and there's a whole of like nine things on the menu. It's a lunch counter, almost the same as [Foreign & Domestic], actually. Our kitchen now is I guess bigger, more equipped, whatever. This was like fryer, a two burner electric plugin that was just for pasta water, and six burners. And then it had a huge chalkboard.

It'd be like, okay, we have eight things on the menu, eight specials every night. And so it just opened my eyes. There was one guy there who had worked in New York for Bobby Flay and with Mario Batali — this was right before he went to Babbo. So it was all these articles and stuff, it was wow, polenta crusted halibut.

You went to the CIA eventually, right?
Yeah, went to CIA, met my wife there. We didn't really meet like Hey! We're in love! We went on a couple dates, took her to friends' houses in Jersey for parties. And she was like, this guy's sort of a douche bag. I had delusions like wow, I'm at CIA, I'm going to go to Hawaii or Thailand or something to do my internship between years.

Instead, I ended up moving to a friend of mine's parent's house in Northern New Jersey nine months before I went to CIA and just worked for free at Aquavit for Marcus Samuelsson. Basically just ripped my hands apart cracking lobsters for ten hours a day. Peeling artichokes and potatoes and stuff, being like wow, this is a real New York kitchen. This was the old Aquavit, the fall of '98.

Tell me about your time in New York kitchens.
Went to CIA, got my externship the following June or July, and ended up going to this place, Tabla. I was at Aquavit and they were like we'll pay you minimum wage. If we deem what you're doing is worthy of overtime, we'll give you overtime. And I was like, uh, oh no. And then my future wife, Jodi was like, oh, I'm working at Gramercy Tavern, I'm going to do basically an extended internship, do like a year there. I found this great apartment in Fort Greene, in Brooklyn. It's got a pullout couch and it's like $1380 a month, so I need somebody to split it. So we ended up living together. Then I went to Tabla for two years, and then eventually I went to Per Se and was in the private dining room for a year. And opened up the Cafe Country, and was there for two years.

So how'd you end up in Austin?
Well, then we moved out to Portland, Oregon. We wanted to be here, we love Austin, we love Portland, but the weather is just like oh? Jodi is from San Antonio, and so being in Texas instead of Portland where it's like nine months of rain. People here are like, oh, that's not that bad. No, no. Take the worst day of weather in Austin all year, like where it was raining last week, take the wind away and make it not quite a torrential downpour, and that's Halloween to Fourth of July.

The first year [in Portland] was fine and then the second year was like oh my god. We were actually a couple days from signing a lease on a space. We didn't have any money, but we figured if we could show people this great space, we could at least afford paying the rent on it. But we just said no way, came down here.

And how did you get to the idea of opening Foreign & Domestic?
Decided that the first thing we wanted to do was just open up something that would be 12-14 seats, and just be able to cook there. And just do whatever we want: hey, we're having four courses tonight, we're having 30 courses tomorrow. Just be open Thursday, Friday, Saturday, Sunday night.

And then we decided, you know what Austin doesn't have? Neighborhood restaurants. We've just seen that you go out to places that are very quality in Austin and you pay through the nose. And you pay a lot more than you would in New York for lesser quality — great for Austin standards but lesser for major city standards. So we decided okay, you know what? What could we bring to Austin that we don't think has been here.

How would you describe the food at F&D? What are your influences?
I just want to cook. And cook for people the stuff that I like to eat. Being from Ohio, and I was adopted and I was raised by two moms. And one of my moms was from upstate New York, from Rochester, Dutch ancestry. Grew up on everything canned and hot house. My other mom was from Dayton, Ohio and very German-Irish, very Appalachian roots. We had brains and eggs, cottage cheese pancakes. A lot of those things are from my great-great grandmother, Ida. Instead of having balogna sandwiches, there were beef tongue sandwiches with hot mustard that my mom made at home.

We had a huge garden in our back yard, and I remember on Easter we always had rabbit. I had two older sisters at home who were like looking at the bunny in some sort of pan and being like, um, is that the bunny who brought the Easter baskets? Just mortified to have finally figured it out. Or like the time my mom was like, those aren't scrambled eggs. Those are calves brains. And this was like? I loved that stuff then and then in high school had a rebirth and I wanted to eat that stuff again.

How has F&D changed since you first opened?
I think the biggest change is just going from people coming in and being like this is weird and quirky and funny, to being like yeah, it makes sense. Like rather than going to the grocery store and getting a perfect pork chop that's plastic wrapped. You're like, I have no idea where on the pig the came from. It's a?chop? Where does that come from?

How do you feel the reception has been? Especially within this neighborhood, which is not exactly know for fine dining?
We've really become what we've wanted to become. Being a neighborhood place. We have a ton of new regulars that come in, say hello, bring us different things. We have a guy down the street who has a huge smoker. Makes porchetta. Or he'll be like hey, we have four pork bellies to make bacon. Why would we ever do that between two households? We're both small families. Three people in each family. And we're like yeah, we'll take that. It might be a little under the table or whatever, but it's also like hey, this is awesome. I think we're at the tip of the scene.

People are really getting into food and understanding. We did a braised pork skin spaghetti where we braised pork skin for a long time sous vide and then took the skin and cut it really thin, and that was the spaghetti, was the pork skin. And it's really good with a fried egg, did sort of a carbonara with it. And people were like, whoa? That's really offing good. Yeah! It's pork! Pork is fucking awesome. The snout, the tail, the ears.

That was one of our first things we put on the menu was pigs ears and we did just a riff on your average spinach and bacon salad. And it was just a bacon vinaigrette with wilted spinach and raw spinach and grated spinach shallot confit garlic confit, some lemon juice. And pig's ears. And people just at first were like no, no, no and then now are like this is awesome. I think that's one thing that's really different from when we first opened to now. People are like, okay, it's not a novelty thing.

Stay tuned Monday for part two of our interview with Ned Elliott!

Where to Eat and Drink Over Labor Day Weekend in Austin

Taco Truck Wonder Taqueria Mi Trailita Closed Back in May