Welcome to The Gatekeepers, in which Eater roams the city meeting the fine ladies and gentlemen who stand between you and some of your favorite hard-to-get tables. This week: Stacy Franklin of Franklin Barbecue. 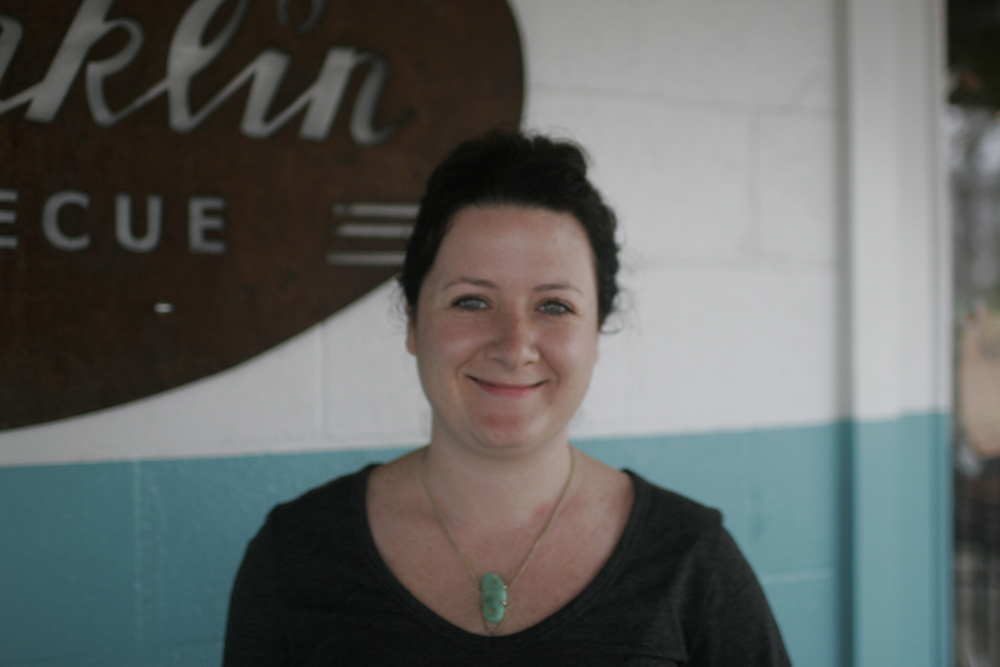 Lucky are the Austinites who remember a time when standing in line for hours wasn't a prerequisite for eating what has become some of the most-lauded smoked meat in the state, and possibly the entire country. Franklin Barbecue, which opened two years ago in a little mid-town trailer, has moved on down to the East Side, and their spacious brick-and-mortar (and wood, lots and lots of wood) location still stretches to serve the masses that flock to the barbecue mecca.

We stopped by the restaurant to talk with Stacy Franklin, who manages the hungry hordes while Aaron Franklin mans the barbecue pits, about keeping the line manageable and happy, and why her customers are like vampires.

Tuesdays and Wednesdays are the slower days. Friday and Saturday are the craziest days. And it gets really crazy. People start showing up here, normally before nine on Saturdays. So they kind of chill out there for a while. That’s the hardest day to get in here is Saturday, if you don’t want to wait for two hours.

Some people bring chairs, they sit and read the paper. They’ve go their coffee. We try to put coffee out on the weekends for people to drink. That’s a long wait. Fridays are normally pretty long wait as well. The weather has been affecting the line quite a bit.

Normally a couple staff members get here at nine, and start setting things up. And there’s already somebody here cooking since right before four a.m. Basically at 10:30 we have to get everything finalized before service, because once we’re open, if we’re not ready, things just are bad. It just doesn’t stop. You have to make sure you’ve eaten breakfast because you can’t stop between ten and two o’clock to eat anything. Then it’s pretty solid until about two o’clock an then we normally are shut down. We spend a couple hours cleaning up, normally the lunch staff leaves about four. Then there’s another person that comes in at three o’clock and they cook up until midnight or one a.m.

How's the new location managed differently than the trailer y'all had up north?

It was actually a lot of work trying to work out of a ten foot space. Serving, cooking, doing all of our prep. We couldn’t do prep during lunch at all because we’re serving. It just kind of made it a lot more lengthy and tedious. Because once we’re serving you can’t be peeling potatoes, slicing cabbage, you have to do that before service. You can never have two people working on different projects. Here, we can have people working in the kitchen, making barbecue sauce, trimming briskets while we’re actually open. Which is really nice.

The other thing that’s really nice is not having to deal with wastewater, which was such a pain in the butt. Every time you wash a dish you know later you’re going to be hauling that water somewhere. So that’s a pain in the butt. I don’t know how many trailers are actually plumbed in to the water line, but you really can’t be because you have to have a grease trap. That was probably the biggest pain.

The other things that were pains were things where it’s really, really cold—our water lines froze last year. We didn’t have any running water, so we had to close one day out of the blue. Just the weather was a lot worse. It’s still bad because we cook outside and if it’s raining you have to run out there and check the fire. If it’s really really cold, there’s no stopping it. And you have to check the fires more often because theyt end to need more wood when it’s really cold.

It’s nice that when it is raining people can stand inside. Unless the line is coming outside also.

So how do you manage the line itself?

Before we open, we always have the front doors open, but people still wait outside. They’re like vampires, they have to be invited in. so they wait outside at the very front door and the line normally goes down the wheelchair ramp and along the exterior of the building. Saturdays, it’s out in the parking lot a good amount of time. It’s over a hundred people.

I normally tell people, once we’re open, I tell people about an hour and a half from the back of the building. If they’re out there [in the parking lot] I tell them two hours plus. But we always tell people before they wait. I want them to know. It makes for a better mood that way, if people know what they’re getting into. And normally people are like that’s cool, we were expecting that.

How long was it between when you opened and when the lines started getting bad?

It took two to three months before it wasn’t just neighborhood people and friends. And it kind of started growing from there.

Are you surprised at all that you've become such a big deal?

I didn’t see it going quite that way. We just wanted to make good barbecue and offer people an alternative to driving to Lockhart. That was the basis of it. We never thought it would get this crazy. We hoped it would be busy so we could stay in business, but this is a little more than we expected.

But you've still got old-school folks who remember the days before lines, too.

Remembering that, a lot of our regulars are like, I was there! I was there when I could just walk up and get something! Now that’s glamorized. Even though it was less than two years ago. People have very warm feelings about that.

Do you ever run out of meat these days?

We do. Basically, we have three barbecue pits. The third one, Aaron built that one, he doesn’t like it. The other two are round, this one is square and it doesn’t work the same way. He’s actually making another one. So if anybody wants a gigantic smoker we’ll be selling it soon. We’re working on another pit to replace the third one. But because it doesn’t work the same way, we have to shuffle between the three of them for everything to taste the same. So it’s a lot of work. Really, that’s about as much meat as we’re comfortable making. The more we feel like we make the less attention each single piece of meat is getting. And you can tell, quality-wise, when you start making a lot more meat. We’re to the point where we’re just going to be open for lunch and make good food and try to keep it really good.

For more Gatekeepers published today from across the Eater Universe, head over to Eater National.