This is One Year In, in which Eater Austin interviews chefs and owners on the occasion of their restaurant's first anniversary. This week, we speak with Paul Hargrove of Trace. 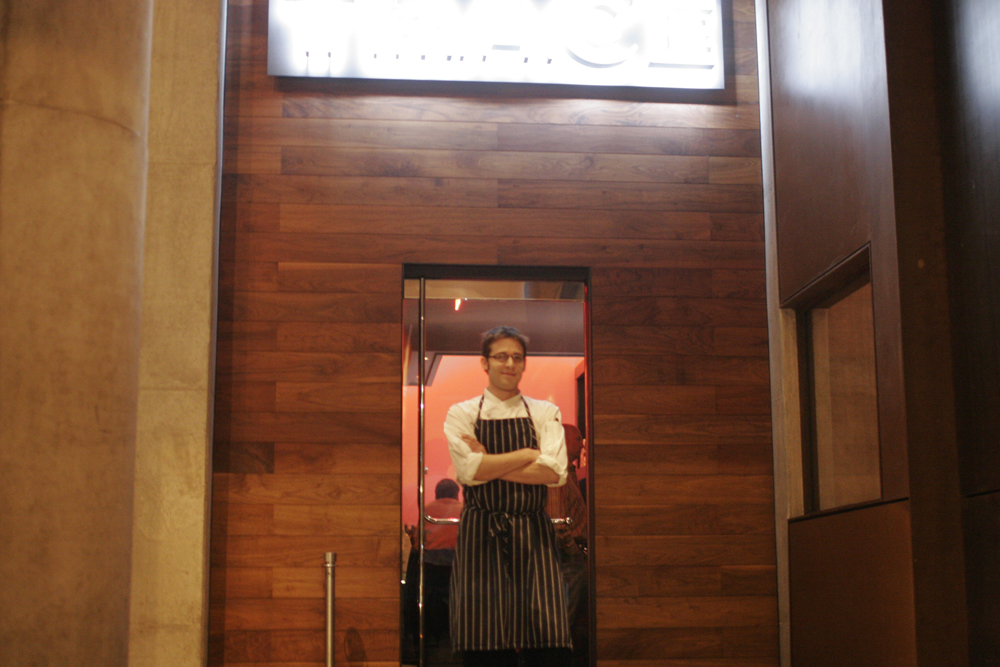 Trace at the W Hotel opened on December 9, 2010, and over the last year, the restaurant--it's the first W dining room not to be launched by a celebrity chef--has garnered accolades from near and far praising Chef Paul Hargrove's thoughtful, hyper-local cuisine. To celebrate their birthday, the restaurant is tying in all their anniversary specials to plays on the number "12/9," but more about that later. First, we'll sit down with Chef Hargrove--an Eater Austin hottest chef contender if ever there was one--and talk about his year launching one of the highest profile restaurants in Austin.

So, one year of Trace.

It’s the same age as my daughter. My daughter was born, like a day before we opened. Her birthday’s the seventh. We opened the ninth.

Wow! So you've got a newborn and a new restaurant. Talk to us about the beginning.

The beginning. The beginning was interesting. We had a lot of ideas, it was a big collaboration between a lot of people involved with the hotel and their ownership and a lot of us in the back, trying to figure out what we wanted to do as a restaurant. And with Valerie (Broussard, the Trace forager) being a huge part of the concept. It took a lot of us getting to know Austin, because I’m new here, too, I just moved in September (2010). Getting the hotel open, we were waiting around, waiting around, trying to figure out when we’re going to be open, and then it was like, okay go! That was challenging, definitely, getting the hotel open all at once, the restaurant open all at once, all three meals all at once. That was unique. And figuring out how we wanted to do things. Our clientele, exactly what kind of restaurant we wanted it to turn out being. The progression from then to now has been huge.

How do you work out a menu with a company as large as the W?

So what did you bring to the table during initial talks?

I wanted to really play with the idea of using only, literally only Texas products. For everything. That was a very lofty idea. (Laughs) Especially for a three meal restaurant. I still am trying to push that a little bit. There’s a lot of things that grow wild here that I want to incorporate into the menu a little bit. It’s just trying to figure out a way for things like, we could get an actual forager to go out. Amy Cromwell, she does stuff for Edible Austin, we were talking to her about going out and getting stuff and just bringing it to the back door. Like Henbit. She can come up with a lot of cool recipes and really good ideas, but trying to incorporate that into a restaurant idea, it’s been some give and take. And some failures and hits and misses here and there.

I still like the idea. I think there’s a lot of really cool things that just grow in Texas. I still think that’s a really cool idea for a restaurant, just using only what grows around you as the majority of your menu. That’s hard, but the staff that I have is really exicted about doing things like that. To be realistic you have to do some food that may not go in line with that concept, because overall you can’t just be a totally conceptualized menu, especially not three meals a day. It’s a lot of staff to keep trained on how to use this or that or do stuff. That was my input in the beginning.

Any other ideas you're excited about?

Some of the other things I’ve brought to the table as of late is our New Year’s Eve idea, which they all liked. Instead of doing two seatings, we're going to do one seating that's a sit down dinner and then with the later one we're just going to do a big small plates menu. A couple platters, a seafood platter and charcuterie platter. It's New Year's Eve, everybody that goes out New Year's, everybody wants to party like a rock star, where better to do that than the W? So let's not isolate Trace out of that. Let's make the Living Room and Trace be one big party.

I'm also really into making Trace a part of ACL, really catering to the different types of shows there. I would like us to be the restaurant for that theater. If you’re going to go see a show, come here first or after.

How has the menu changed since you first opened?

The menu concept, the restaurant concept, they want the menu to change four times a year. So I’m currently thinking about what to do for changing the menu at the end of December. We try to offer al ot of specials every week. We want to utilize as many local things as possible. Our menu has changed four times now, and it hink we really are starting to hit our stride. Especially after this summer, the summer menu was a big hit with our crowd. The fall menu’s doing really well. We’re figuring out from our end, what people like. A lot of us are new here, so we’re still trying to figure out what we can do, what we can’t do. I try to listen to the clientele and find that nice balance of what I’m able to bring in and what people want. Blend the two together.

We’ve gone from, when we opened, being a little too high end to toning it back a little bit. That’s hard. We have kind of a high end looking dining room which is where the idea for trying to do something high end came from. When we saw the dining room we were like, well, we’ve got to match the food with the way everything else looks. Because you can’t serve really rustic food in a high end dining room, that doesn’t make sense. We have catered the menus as we’ve changed it to find a nice balance. The food makes you feel more comfortable, but the dining room is still a high end place to go.

You were in Louisiana, then New York and Florida, now Austin. How are you finding the scene here?

I’ve been trying to get here since ’08. I was living in Florida at the time. I was still working for Daniel (Boulud) at the time. My fiancé and I made the decision to move to Austin. She’s from nearby here. It’s always kind of been on the back of my mind, is this a place I’d like to end up when I was done with New York? I didn’t want to stay in New York forever and I definitely stayed longer than I’d anticipated. But you know, we threw around a lot of cities but Austin kept being in the top one or two. We finally just made the decision that we were going to come. Our first child was on the way. We made the decision to move and they found me and I came down.

I already knew, kind of, had an idea what it was like here already. I came down really excited. And I’m still really excited. I’m having a great time, and I love it here. I love it in Austin. It’s exactly the kind of town I’m looking for. The kind of city I’m looking for. I really like the people over at Springdale (farm), we want to do some kind of dinner out there soon. I’m having a good time.

How does running a large hotel restaurant compare to your past experiences in smaller kitchens?

I did some hotel restaurants early on in my career, before New York. That was in ’02, so before then. I worked for a hotel and casino, but not just for a hotel. Then independent restaurants, then I worked with Daniel. He’s gotten a lot bigger now, he’s a corporation in his own way. An LLC. (Laughs)

The restaurant in Florida was a boutique hotel, but nothing on this scale. There are some similarities and differences. I think they have to be approached very differently. Small boutique hotels, you don’t really rely on your hotel business all that much. You have to have a restaurant that’s catered to the locals. This, we’re trying to cater to the local clientele but it’s a very large hotel, we have to do both. That brings an interesting mix on a Saturday night.

Did you feel pressure, being the first non-celebrity chef to open a W restaurant?

No, I try not to think about it that way. I’m not Alain Ducasse, I’m not Daniel. I’m trying to build my name up by hard work the same way they did. I didn’t look at it that way, like I was being measured by those standards. And they did a good job of not forcing that on me. So that was good. And I learned a lot about how to handle that from Daniel because he has a lot of his restaurants in hotels now, so watching how his staff interacts with that kind of situation an dhow he interacted with that situation, I paid close attention.

What are you looking forward to in the next year for Trace?

I’m looking forward to SXSW again. SXSW this year was pretty crazy. It was different than we were expecting. We didn’t get hit all that much in the food area. But we’d just opened, we were dealing with a lot. This year we’re going to have more of a game plan from the food perspective. The bars definitely saw the action. We’ll have a better game plan and be able to get more people in to the restaurant during that time.

Some specials, we might end up catering a menu around that like with New Year’s Eve. Because at SXSW, you don’t get a lot of diners. You know, they’ve got to get to a show, most of them are in the industry so they’re on a time schedule. And then the late night thing, we’ve got to attack. We only had the Living Room with a menu there, so we might try to be more out there, come into the hotel, specials, things like that. Get the signage out there that we’re not just a place during South By to drink. You can eat here too. Of course, when I was here for SXSW before I lived here, I drank and ate Torchy’s and that’s it.