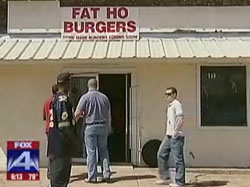 Fat Ho Burgers of Waco, Texas closed its doors this week, but perhaps just temporarily. Owner Lakita Evans, who opened Fat Ho this March, said she is looking for a better location in the nicer area of West Waco, away from the drug activity near its current location.

Evans tells the Waco Tribune that she hopes to reopen by the end of October. Until then, she plans to open a food truck, despite not having a permit from the city yet.

Texas Monthly visited Fat Ho earlier this year, but were not too impressed.

Until the doors open again, Fat Ho Burgers' controversial sandwich names such as the "Supa Dupa Fly Ho With Cheese" will have a different meaning on the streets of Waco.