Austin Beerworks won a silver medal in the English-style summer ale category for their Peacemaker. Uncle Billy's Brew & Que on Lake Travis garnered a silver medal for its Bottle Rocket Lager in the kellerbier/zwickelbier category. Lastly, NXNW brought home a bronze in the Belgian-style lambic for their Barton Kriek.

Notably, Austin Beerworks has only been in operation up in north Austin for five months, so this win is a great welcome present for them into the local beer scene.

The whole experience is surreal [...] going up against the best and most-established breweries in the country, we really didn't expect to win anything during our first year at GABF. When they announced our name, we all lost it. I remember lots jumping and screaming, maybe even some misty eyes. We were standing in a group with a bunch of other Texas brewers, and they all seemed almost as excited as we were. 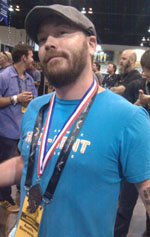 When asked what this award means to him, his partners, and his head brewer, he replied:

We're trying to keep the whole thing in perspective and not let it go to our heads [...] Winning a medal at an event as big as GABF is kind of a crap shoot [...] There is definitely some luck involved. That said, our beers are awesome.

Last year, Real Ale won a gold for their Rio Blanco Pale Ale, but the three medals this year bring even more attention and respect to the Austin beer scene. Additionally, Austinite Corey Martin won the national homebrewing competition at this year's festival.

From the very beginning, our goal has been to make "World-class beer from a world-class town". We're very proud of our beers, and we're very proud to be from Austin. At the festival, we were approached over and over by people from all parts of the country who told us what a great town Austin is and what a great beer city it is becoming. With all the new breweries getting ready to open up, it's only going to get better.