Hopdoddy's Chuck Smith on Opening a Second Location, the Power of Social Networks, Being a "Burger Bouncer"

Share All sharing options for: Hopdoddy's Chuck Smith on Opening a Second Location, the Power of Social Networks, Being a "Burger Bouncer"

This is One Year In, in which Eater Austin interviews chefs and owners on the occasion of their restaurant's first anniversary. This week, we speak with Chuck Smith of Hopdoddy Burger Bar. 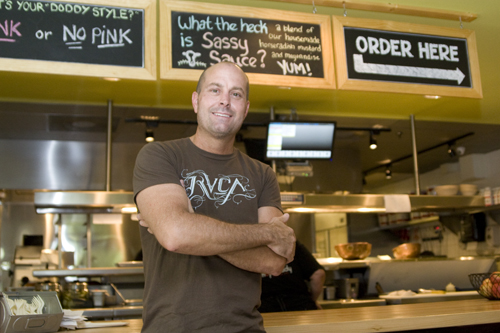 Chuck Smith and Larry Perdido opened Hopdoddy on South Congress in October 2010, building off experiences from their previous projects of Moonshine and Saba. Since then business has been good. Very good, with people continuing to pack the restaurant on a daily basis. Hopdoddy's name is a combination of Hop (for beer) and Doddies, the name of Aberdeen cattle's original Angus.

What was the vision you had for the Hopdoddy concept?
When Larry and I opened Moonshine, we had originally thought of an organic, counter service cafe. We ended up not going with that, but when thinking about this place we realize people choose food based on cravings - pizza, sushi, burgers, etc. We originally didn't have the idea for a burger place, but when we thought about cravings we decided on burgers. How can we do it better. We want to be a burger place where parents bring the kids, not one where kids take their parents.

How did you come to chose your location on South Congress?
We had heard about Cissi's Market closing (the restaurant that was formerly in Hopdoddy's location), and South Congress is the ideal location for trying something new. It has such a meandering population, and because of the food trucks people have become accustomed to waiting in lines. In this area we have great neighbors - the trifecta of pizza, tacos, and burgers, and with the culinary guys of Perla's next door.

How long was the wait when you first opened and how long is it now?
When Hopdoddy's first opened, the line often backed up to the door which is about 30-40 minutes. Now we have it down to about 20 minutes, mainly because I think people know how Hopdoddy works. We serve on average about 1000 people a day.

How did you want to differentiate Hopdoddy from other burger places?
Our beef is hormone and antibiotic free and humanely processed. Our buns are made fresh twice a day. Even for the vegetarians we have a hemp seed patty. Our concept in general is "what will taste good between a bun." What ground up makes a good patty? Anything from tuna to duck to pork. Also, the greens in our salads are organic, too. We try and source as much as we can locally and organically, depending on the season because of the volume we need.

What was the idea behind your having a bar?
We knew we wanted to be a burger bar, and fortunately the craft beer movement was trending strong in Austin. It wasn't hard to get 12 good local beers on tap. For the mixed drinks we wanted fun, festive drinks that compliment what we're doing. We wanted to show that we grind (the burgers), we bake (the buns), and that we squeeze all of our bar juices daily. We like to highlight local spirits. They're even more popular that organic ones.

When did you first realize Hopdoddy was going to be such a success?
When people started lining up and wanted to wait. Now in this post social network age, we realized how viral chatter can be when you're giving people what they want. It was just really blowing up. We really started to see lines get crazy after SXSW, and I even had to be a 'burger bouncer' to give the line some order. I wanted to hold the door to ease people in and help explain how it works. We would give ice water to people in line and taste people on fries and fresh baked bread while they wait. We're always striving to keep the momentum and to be better.

Are there any plans to open another location?
We have a second Hopdoddy. It's going to open in the Spring after SXSW on Anderson Lane in the West Anderson Lane Plaza. It used to be a Souper Salads. The design is going to be very similar. The tall glass... when you see it you'll know it's a Hopdoddy. We like that it's still kind of central, and that on that north side of Anderson there's a good independent stretch - Alamo Drafthouse, Cover 3, Zen, and The Goodnight that's coming in.

What missteps have you had and what did you learn from them?
In the social network age don't underestimate word of mouth. You've got to be ready. If you're giving people what they want, it's going to come at you hard and fast. Be agile. It has been a constant evolution. We even spent months talking to and polling our customers about our queuing method - wait in a line or order from the table. The line method won 3 to 1. And, somehow, the ratio of seats to order time to cook time to seating time just works magically.

What are you most proud of?
Creating a restaurant is like writing a song or a poem. You're trying to tell a story. I'm really proud when people embraced the story we were trying to tell.

What are the next hurdles you think you're going to face?
To make sure that we don't drift from who and where we are. It all depends on who we bring on to work with us. They need the tools and the awareness to stay on a steady course.