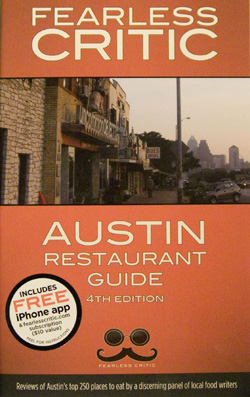 The newest edition of Fearless Critic has been released, updating Austin diners with expert reviews of our restaurants, from 5-star establishments to cash-only taco stands. Over the past six years, the Fearless Critic restaurant guide has become known as the trusted go-to resource for deciding where and where not to eat, and often what dishes to have. Professional restaurant critics and amateur bloggers and Yelpers simply cannot match the breadth, scope, and skill of their contributors.

The new fourth edition is much smaller than year's past, as they only chose to review the "top" 250 restaurants, cutting down from the broad inclusion of 500 last year. In a sense, a restaurant not being included says enough. However a new feature this year is the Fearless Critic iPhone application, with new restaurants and reviews being added regularly.

The individual ratings compare food and feel, and the extensive lists in the dining guide include categories such as vibe, best beer, vegetarian friendly, outdoor dining, and even weekday food after 1am. There's also a handy section listing restaurants by cuisine and by neighborhood.

Fearless Critic's policy is to be brutally honest in the reviews, as if they are giving a recommendation to a good friend that called up asking for help. They do not accept advertising, they evaluate incognito, and they pay for their own meals. The reviews were written by a panel of twelve contributors, including alcohol-genius David Alan of Tipsy Texan, blogger Michael Chu of Cooking for Engineers, and writers Rachel and Logan Cooper of Boots in the Oven.

Eater spoke with two of the contributors, Editor Erin McReynolds Davis and Michael Chu, about the new edition and about the culinary scene in Austin in general.

What was your favorite restaurant?
EMD: For my everyday cheap eats: Taco More, El Meson Taquería (the original down south), La Canaria, Maharaja, Teji’s Indian Food, Joe's Mexican Bakery, Pho Saigon, A+A Sichuan, and Asia Café. Upmarket: Uchi/Uchiko. Uchi still deserves every bit of its acclaim... it doesn't have to get better but it does. The fact that it still improves, that there are still geeks making the menu, makes it a rare and undeniable bastion of excellence. Congress - what a surprise. Great service, a clear philosophy in the drink program, and dish after dish of happy surprises.

MC: The best food we've had in Austin was at Congress Restaurant followed closely (or tied) with Uchi. In fact, before I moved to Austin, our meal at Uchi was so delightful that it was one of the motivating factors for moving to Austin.

What was your rubric for rating?
EMD: We rate on deliciousness, regardless of how difficult a cuisine is to make. How much of a party is it making in your mouth? Feel (how happy are you being here, regardless of expensive decor), and if appropriate, the pizza, margarita, burger, and so on. Consistency and context are two often-raised issues among our panelists.

MC: In general, I try to rate restaurants based on restaurants throughout the country that I've dined at ranging from haute cuisine to discount tacos with mystery meat.

What does Austin need to do better?
EMD: Service. Austin needs to get over the prejudice that professional service means chilly, no-fun service. It's that rare person who can balance personability with efficiency; who can gauge when a table wants to interact and when they want to be left alone. Also: beverage programs. They're getting better, but we have yet to see a restaurant that approaches every level of its service with excellence.

MC:What Austin needs to do better is get more culinary education and adventurousness in the masses. It's not often that I see people order the new but thoroughly excellent Beef Tongue sandwich at The Noble Pig. With some food trucks that come and go, there are some seriously talented chefs and cooks in Austin and people who love to eat need to come out and support them. Austin foodies should also encourage their friends to try new things.

What does Austin do well?
EMD: It doesn't take itself too seriously; most of the really talented and exciting people in this city are the people who have this attitude of "come on down to my kitchen, let's do it up and have a real good time." I don't really care that much that Alamo Drafthouse's food almost uniformly sucks - what they offer in terms of experience, vibe, beer (and now cocktails), and fried pickles makes me want to stand up and cheer.

After all the time you've spent eating out and talking about restaurants for Fearless Critic, what are some other thoughts you have on the Austin culinary scene, generally?
EMD: It's easy to rail against our lack of real Thai food, Italian food, Greek - our lack of culinary diversity, overall. But Austin hasn't been doing this that long. Fantastic places started popping up that just blow it away and teach diners about the cuisine. We certainly don't have the immigrant population to support a healthy Thai scene like in Los Angeles, there's no reason some really geeky, committed kids can't open something like Portland's Pok Pok. But look at what's happened in just two years, even...this place is exploding... it's so much better than it used to be, and getting better all the time.

MC: Exploring the restaurant scene in Austin can be both frustrating and sensational. Randomly picking a restaurant is a recipe for disaster. Yelp is of no use since the palate of the average Austin Yelper is questionable. Word of mouth recommendations often have to be taken with a grain of salt. There's good food out there - food prepared with finesse, balance, and complexity... unfortunately, you have to search for it, but when do you find it, you treasure it.

The fourth edition of Fearless Critic is available now, at Book People and on Amazon.com. When you purchase the book, you are also given a unique code for their iPhone application and a subscription to their website fearlesscritic.com.

What to Eat and Drink During Pride in Austin