Welcome to The Gatekeepers, in which Eater roams the city meeting the fine ladies and gentlemen that stand between you and some of your favorite hard-to-get tables. This week: Jason James of Barley Swine. 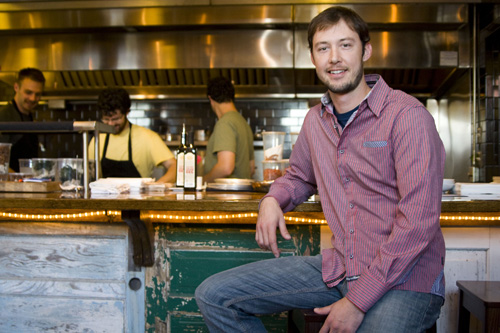 Barley Swine opened to much fanfare at the end of December 2010 when chef Bryce Gilmore moved from his Odd Duck Farm to Trailer to his brick-and-mortar down on South Lamar. When the restaurant opened, there was no storage, and running out of food was a nightly occurrence. The heat didn't work (in the winter), which left the hostesses and manager to suggest that diners keep their jackets on or even offer them coats if necessary. Still, the restaurant was always packed. Today there is storage. Heat. Working air conditioning. Even a wine cooler. Barley Swine is busier than ever, especially after chef Gilmore won a nod from Food & Wine Magazine for Best New Chef earlier this year. Jason James is the manager that keeps guard over those much-coveted seats, keeping everything together and (most) everyone happy.

It's 8 p.m. on a Saturday night. What's the wait for a table?
How many people, is the first question. Two people will wait about 45min to an hour and a half. We'll try and seat them at the bar. Four people will be looking at around two hours. Five or six people could wait four hours because we want to limit the number of large parties. Eight people... good luck. It might be five to six hours. And people do wait for that long. I need to say though that all the wait times we tell people are just estimates. With so few seats, the wait really is dependent on the pace of people eating at the tables. I never want to ask a table to move or to leave because they've taken too long. At the bottom of the menu though, we do tell diners to be mindful of the waiting guests.

What about earlier in the night?
If you walk in when the restaurant opens at 6pm during the week or at 5pm on Saturday, you can get seated immediately usually. Most every day there is a line at the door when we open, so just make sure you're one of the first 34 people.

Do people ever try to slip you cash or anything for tables?
People try, but we don't accept. People have even offered $1000 for a table. I tell my hostesses that if I see them taking any money, it will be the last money they get here. People think we take bribes for tables because another party might get seated before them. You have to look at our restaurant, it's communal seating. It's like a big tetris board, so we’re going to seat people in the best accordance for the restaurant. It really is like a tetris game.

How many seats are there in the restaurant?
It's small, there are only thirty four seats, and it's all communal seating except at the bar.

Do you have regulars, and what are they like?
Oh many. Many many. The regulars I notice the most are the chefs from other restaurants coming in on their days off, from places like Uchi and Uchiko, Jeffrey's, Olivia, Foreign and Domestic, and Haddingtons. Emmett and Lisa Fox (of FINO and Asti) come in all the time; they're great people. They love it here.

Do you get a lot of celebrities coming here at all?
A few. Drew Barrymore has been in. Bill Paxton was here, and he was yelling "I love Barley Swine!" out in the parking lot when he left. Chefs from all over the country have come in. We've had all of the Top Chef judges: Tom Colicchio, Gail Simmons, and Padma Lakshmi. The best part of it, when Tom and Gail came in with their party, two random people were seated with them. They had a blast together, buying each other wine, enjoying the communal style we have here.

What happens if the restaurant is packed and a VIP comes in?
They tend to call ahead and let me know. I mean we're going to try and take care of those kind of people if they give us notice, but if they walk in on a busy Saturday night and want a table, we have to say sorry. We're not going to add an hour wait time to regular customers that have already been waiting.

What's the most outrageous request you've ever received from a customer?
I won't name names, but a party of two requested to have one of our 6-top tables all to themselves in the middle of a busy day. That was just ridiculous.

So how long have you been working at Barley Swine?
Since the opening.

What brought you to Barley Swine?
I was the bar manager at Z'Tejas, and then started the cocktail company Lucky 13 with a buddy and his wife. I had heard about the opportunity here, talked with Bryce, and I loved the energy we had. Originally they were planning to open Barley Swine in November of 2010, but my wife and I had a trip planned to Nepal to hike the Himalayas in November of 2010. I left that first interview thinking this could be great but bad timing for me. Before I left for the trip though I met with Bryce again at his dad's restaurant, and they told me they were delaying it until mid-December. We shook hands, and I started two days after I got back.

What's your favorite table in the restaurant?
The captains seats, the two seats at the end of the bar right in front of the kitchen. They're the best seats in the house. It's a lot of fun. You are literally sitting in the kitchen.

What's your favorite thing on the menu?
Ah, that's hard. Do I just get one? So our restaurant is small plates, so I'll pick two - the scallops and the duck. A very close third is the sweetbreads. And of course the fois gras for dessert. It's ridiculous. Butternut squash ice cream, grilled fois gras, sage funnel cake.

When you're not at Barley Swine, where else do you like to eat around town?
Uchi and Uchiko, two of my favorites. Haddingtons. I've always been a big fan of parkside. Olivia for brunch. Jack Allen's has the best brunch buffet. I went there for my birthday if that says anything. For trailers I like Lulu B's for sandwiches. They're fantastic.

What about drinks?
Paggi House is one of my favorites for cocktails. Z'Tejas and Jack Allen's have great margaritas. Black Sheep Lodge and Reds Porch in general. Black Sheep has an amazing beer selection, and it's really close to my house. I enjoy Opa and Wink for wine.